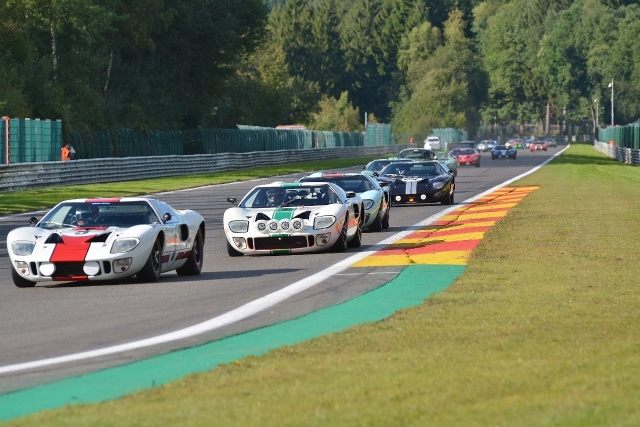 The Spa Six Hours racing weekend is on the top three list of the best historic racing events of Europe. It’s the layout of the Francorchamps circuit in the beautiful green Ardennes region and the huge amount of entries (650 vehicles) of the 12 different race series. Although Friday was a bid drizzling, one couldn’t complain about the weather this year. The Saturday- and Sunday-morning were characterized by fog, but the fog dissolved within an hour. During the afternoon many spectators could enjoy the Belgian beer and nice food on the roof terrace of the pitbuilding. Even during the Six-Hours race on Saturday-evening the sun was shining and during the sunset everyone could enjoy the spectacle of the endless number of cars passing by.
The Spa Six 6 Hours Endurance
The start of the long-distance race on Saturday-afternoon is what every spectator is waiting for, The green light for the start was given at 16.25 hrs. instead of 16.00 hrs. so the 6 hours race changed to a 5½ hours race. The queue of 126 racing cars behind the pace car was impressive ! The first 8 cars behind the pace car were Ford GT40s. The race started and after a few laps, the cars in the back of the field were already passed by the frontrunners and thus a mixed variety of cars were formed. The pitstops during this race are often hectic with running crew and mechanics, shouting to each-other what should be checked and adjusted to the car. It’s like the 24 Hours of Le Mans ! Compared to last year the number of Ford GT40s has increased significantly, from 11 cars to 16 cars. In 2014 there were 10 GT40s and in 2015 there were 12 GT40s. Amongst the photographers and journalists there’s always the discussion about the originality of the GT40s competing at the Spa Six Hours. The conclusion is that most of the GT40s entered at the Six Hours race are very well created replicas. The word replica is even misplaced as these GT40s are recreations of the real thing. Firms like Gelscoe Motorsport (UK), Superformance (USA) and Cape Advanced Vehicles (South-Africa) are able to build full FIA approved replica GT40s. The same thing can by said from AC Cobras and Shelby Cobras. The original cars are worth so much money that it is not wise to enter such a car in an endurance race like the Six Hours. Keep in mind that these replicas aren’t cheap either, you can’t buy a race-worthy replica GT40 under 250,000 Euros. Most of the visitors aren’t even aware that they watching a replica GT40 or AC Cobra. The German team Nolte/Funke/Stippler left form pole position in the unobtrusively gray painted GT40. The English team Ward/Smith followed also in a gray GT40. That one of both GT40s would be the first to take the chequered flag was imagable but that both cars would finish the race within the same lap was a surprise to many spectators. The English team were the winners followed by the German team. Another three GT40s classified themselves behind the two grey cars. It was the 7th consecutive victory for a GT40 in the Spa Six Hours race. The fastest non-GT40 was the Friedrichs/Hadfield/Mallock Aston Martin DB4 GT finishing sixth followed by a Lotus Elan 26R. In eighth position finished a German entered Porsche 904.

Historic Motor Racing News U2TC
34 cars qualified themselves for the two races of the U2TC Touring Car Championship. To be exactly six BMW 1800 Tis, ten Mini Coopers, fourteen Lotus Cortinas and four Alfa GTAs. During qualifying the BMW 1800 TiSA driven by Ian Goff proved to be the quickest of the field followed by the Alfa Romeo 1600 GTA of UK Alfa Romeo specialists Maxim Banks and Andrew Banks. Ian Goff wasn’t lucky as in both races he retired after a few laps. The great battle was between the Alfa of the Banks brothers and the ever quick Lotus Cortina driven by former works driver (BMW, Ford and Rover) Steve Soper. Especially the second race on Sunday was very exciting. Both races were won by the Banks brothers followed closely by Steve Soper. Third place in race 1 was for the Alfa GTA driven by Michael Gans. In race two it was the Lotus Cortina driven by Paul Pheysey which finished third.

Masters Pre-66 Gentlemen Drivers
Another great race was the Masters Gentlemen Drivers Pre-66 GT with 46 splendid GTs on the grid like AC Cobras, Jaguar E-Types, Lotus Elans, Porsche 911s, Austin Healeys and Triumphs. It was the Bizzarrini 5300GT of Georg Nolte and Michael Funke which was fastest during qualifying but during the race the AC Cobras proved to be quicker. Particularly quick were Graham and Oliver Bryant in their AC Cobra. From lap 15 they were in the lead but Oliver Bryant received a post-race penalty for overtaking under the yellow flag and he dropped from first to third place. The equippe Gans-Wolfe (AC Cobra) had to start at the back of the field but Gans stormed through the back of the field and finally Andy Wolfe finished the job in second position not knowing that the penalty of Oliver Bryant would lead them to the top of the podium afterwards. Second place was for Leo Voyazides and Simon Hadfield in the Shelby Daytona Cobra.

Masters Pre-66 Touring Cars
The first half of the 61-minutes race of the Masters Pre-66 Touring Cars was run under the safety car due to heavy morning fog. The race was won by Mike Gardiner and Phil Keen in a Ford Falcon Sprint. Roger Wills finished second in the Mercury Comet Cyclone. Third place was for an unusual car driven by Harry Whale, a Studebaker Lark Daytona also fitted with a five-litre V8 engine. It was the first time Harry drove the Studebaker.

Woodcote Trophy – Stirling Moss Trophy
The combined race of the Woodcote Trophy and Stirling Moss Trophy was driven on Saturday just one day before the 88th birthday of Sir Stirling Moss. No less than 61 cars were on the grid for this race like Lister-Costins (engine by Jaguar or Chevrolet), Lister Knobbly, Jaguar C-Type and D-Type, Cooper Monaco, Frazer-Nash, Lotus XI and 15. The qualification on Friday was driven under horribly wet conditions, Phil Keen took pole position in Jon Minshaw’s Demon Tweeks Lister-Jaguar Knobbly. Second on the grid were Chris Ward and Andrew Smith in a Lister Costin, followed by the Lister Knobbly of Tony Wood and William Nuthall. A unique Lotus 11 competing in the Stirling Moss Trophy but also in the Masters Pre-66 Gentlemen Drivers Race was the so-called Eleven 11 GT Breadvan. The ‘Breadvan’ concept of the Sixties was made famous by the Ferrari 250 ‘Drogo’ (based on a Ferrari 250 GT SWB). When British racing driver Graham Capel saw how successful this Ferrari was, he decided to reshape his Lotus Eleven in a similar way. He raced the car with some success but after its last race in 1964, the special body panels were removed again and the car was turned back to a stock Lotus 11. A few years ago the car was bought by the current owner and he decided to have it restored into the Breadvan-version again.

FIA Masters Historic Sports Car Championship
At Spa an impressive field of 60s and 70s sports cars entered the FIA Masters Historic Sports Car Race. As ever the Lola T70s were in the majority but the smaller 4-cylinder 2-litre cars like the Lola T290, Chevron B8 and B19 can be a competitor for the T70s especially on a wet tarmac. In lap 12 Olivier Bryant (Lola T70 Mk.IIIB) took the lead from Loïc Deman (Chevron B19) but Simon Hadfield was chasing down Bryant for the lead and when the latter was hit with a 3-second stop-and-go penalty, Hadfield could take the lead without any effort. Close behind Hadfield was the McLaren M6B driven by Andrew & Max Banks. During the last 5 laps Hadfield was able to drive away from the McLaren and reached the chequered flag 14 seconds earlier than the Banks brothers. Loïc Deman finished third and Micheal Gans (Lola T290) became fourth

FIA Masters Historic F1 Championship
Twenty-five Formula 1 cars qualified themselves on Friday for the first race on Saturday. During practice championship-leader Michael Lyons (Williams FW07B) was 4 seconds faster than Christophe d’Ansembourg (Williams FW07C) but during the warm-up lap direct in the La Source corner the engine of Lyons car dropped a valve. His race was over. Loïc Deman (Tyrrell 010) fought his way to the front to win the first race at Spa. During Saturday-evening and Saturday-night the engine of Lyons car was replaced and in race 2 on Sunday he could show his driving skills and won the race by 16 seconds from Christophe d’Ansembourg.

Masters Endurance Legends
The Spa Six Hours is considered a historic motorsport event. Nevertheless, this year there was an expection with a new race,named "Masters Endurance Legends". It was a trial run at Spa as this new championship will start in 2018. In this championship are mainly racing cars of the new millennium like the FIA Sports Car Championship, European Le Mans Series, American Le Mans Series, Intercontinental Le Mans Cup and Le Mans Endurance Series. Twenty-two cars were transported to Francorchamps to have there first ever match together. There was an original factory Peugeot 908 from the 2011 season, an LMP1-Aston Martin (DBR1-2), an Audi R8 LMP1, a Judd V10-powered Dallara SP1, a rare Pilbeam MP91, an Oreca 03 and in the GT field a Ferrari 550 GT1 and 575 GTC and a Dodge Viper GT2. The Peugeot 908 by Nicolas Minassian and the Pescarolo of Matthieu Lahaye were tipped as favorites, but the weather conditions favored the less powerful 2011 Oreca 03 driven by Sean Doyle.

Jaguar Classic Challenge
The Jaguar Classic Challenge is open to the XK series, C and D-types, Mk1 and Mk11 saloons and pre-1966 E-types, thus ensuring big and varied grids of period Jaguars running to original specifications. A strong 33-car field competed in the Ardennes. Andy Newall and Rhea Sautter secured their 1961 E-type on pole during qualifying, more than two seconds ahead of Chris Milner and Nigel Greensall’s car. The Dodds started third, with Marcus von Oeynhausen next to them on the second row of the grid. Count von Oeynhausen drove straight into the lead and started pulling away from the field. In lap two he even scored the fastest lap of the race. Sadly his gearbox gave troubles and he fall back through the field and finally dropped out of the race. All the drivers had to make the mandatory pitstop and James Dodd came out ahead in first place. He won the race and second was the equippe Sautter/Newall followed by Niklas and Lukas Halusa.

A stunning circuit set in a spectacular area of the Ardennes forests and the most beautiful racing cars from the past, the 25th edition of the Spa Six Hours showed again that it is one of the best historic racing events of the year. If you have never experienced the Spa Six Hours before, the hectic atmosphere will probably confuse and overwhelm you. Visitors can walk through the paddocks and discover the racecar of their dreams. Most of the time you can enter the pit boxes and watch the mechanics tuning, adjusting and repairing a Ford GT40 or Formula 1 car !