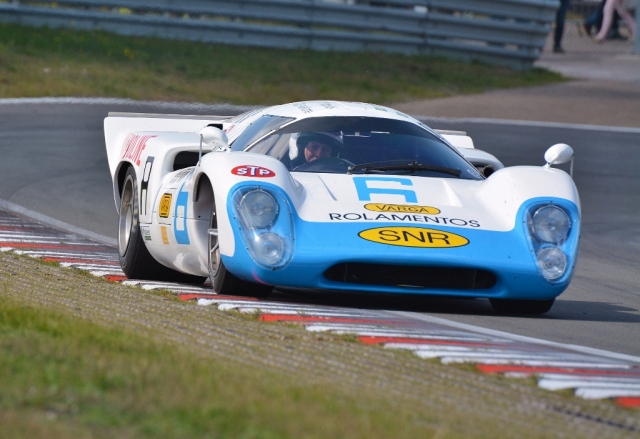 The sixth edition of the Historic Grand Prix Zandvoort offered a wonderful mix of race classes and appealing demonstrations. The programme enhanced races for Formula 1 cars from the 70s and 80s, Historic Sports Cars, Touring Cars and GTs, Pre-War Sports Cars. Formula 3 Racing Cars and historic Grand Prix Cars. Every visitor who read the schedule of this event could notice that an early leave from house was necessary to enjoy all sixteen races and nine demonstrations.
Demonstrations
The demo program was again one of the highlights of the event. Porsche had brought some special race cars from its factory museum like the 917K, the 908/3, the 936 and the RS Spyder. Drivers included Le Mans winners Gijs van Lennep, Jan Lammers and Jürgen Barth. Also BMW Classic brought some impressive cars to Zandvoort, the 1983 Brabham-BMW BT52 Formula 1 car of Nelson Piquet (driven by Jan Lammers), the BMW M1 Procar and touring cars like the 3.0 CSL, 320i and E30 M3. The others demonstrations included the Coloni Formula 1 cars, Pedro Piquet drove the Formula 3 car driven by his father Nelson Piquet in 1979 and former Porsche designer Harm Lagaaij presented his impressive Shadow sports car. The FORCE F1 Legends came with eight Formula 1 cars from the 1980s to 2002, including an ex-Michael Schumacher Benetton Ford, a 1987 Arrows A10 (formerly driven by Eddie Cheever), the ex-Andrea de Cesaris Minardi F186 and a Dallara F191 from 1991. Another nice feature was the presence of the Lotus 49 from 1967 with the three-litre Cosworth DFV engine. It was exactly 50 years ago that the three-litre Cosworth DFV engine made its debut during the 1967 Dutch Formula 1 Grand Prix at Zandvoort. The Lotus 49 driven by Jim Clark won this race and it was the start of the immense success of the Cosworth DFV formula 1 engine. Present owner Chris McAlister drove the Jim Clarke Lotus 49 a few laps together with some Lotus F1 models like the Lotus 72 and a four-wheel driven type 63.

Triumph Competition & British HTGT
Fifty-five drivers classified themselves on Friday for the two races of the Triumph Competition & British HTGT (including the Dutch MG Competitions). Most popular models in this competition are the Triumph TR4/TR5 and TR6 and MGA and MGB. Also on the grid was a Marcos 1800, two Jaguar E-Types and a Warwick GT350. The Triumphs TR4 and Jag E-Types were the fastest cars of the field, the first race on Saturday was won by Belgian Marcel van Mulders (Triumph TR4a) followed by just 0.001 seconds by German Christian Marx(TR4a), and third Robert Hamilton in a Marcos 1800. Winner of the race on Sunday was Rainer Vorköpper (Jaguar E-Type), second Robert Hamilton (Marcos 1800) and third Marcel van Mulders (Triumph TR4a).

Masters Gentlemen Drivers
Sponsered by Stena Line the Masters Gentlemen Drivers provides mini-endurance races for pre-1966 GT cars. With one or two drivers per car and a pit stop, the Gentlemen Drivers races offer a fabulous spectacle as pace and team strategy unfolds towards the chequered flag. To be eligible, all cars must be a model that competed in a round of the World Endurance Series pre-1966. Cars may only run on Dunlop L section tyres. On pole position was Dutchman Nicky Pastorelli in a Ferrari 250 GTO, in front of the Shelby Cobra Daytona Coupe driven by Leo Voyazides and Simon Hadfield. Pastorelli led the race from start and was chased by the Cobras from Andy Willis/Rob Hall and Michael Gans/Andy Wolfe. Again Simon Hadfield showed his excellent racing skills by passing both Cobras and than chasing Pastorelli whose Ferrari suffered braking problems. Pastorelli finished second and third place went to Michael Gans and Andy Wolfe. In this same race another competition was held, the GT section of the Dutch Historic Touring Car & GT Championship. The Allard Kalff/Michiel Campagne Corvette Grand Sport took the win ahead of Bob Stevens’ Lotus Elan and Tom Kuiper’s Corvette Stingray.

Masters Pre-66 Touring Cars
Again a Dutch race series was incorporated in a Masters race. The Touring-Car segment of the Dutch Historic Touring Car & GT Championship drove together with the Pre-66 touring cars so the result was a massive grid of fifty cars. Fastest during qualifying were the two Marcos GTs from Dutchman Mark Dols and Briton Robert Hamilton. Other cars in this race were Lotus Cortinas, Mini Coopers, Ford Falcons, Ford Mustangs, Morgan, MGB and a Ginetta. Mark Dols won the race and Steve Soper drove his Ford Cortina to a second place. Robert Hamilton finished third in the Marcos 1800 GT.

FIA Masters Historic Sports Cars
Martin Stretton scored a pole position in the FIA Masters Historic Sports Cars qualification. He shared a Lola T210 with Mark Piercy. In the 60-minutes on Sunday there were 21 cars on the grid but just 12 cars finished the race. The other 9 cars dropped out due to mechanical failure or driver errors. Mark Piercy retired his Lola T210 with a puncture and David Hart pulling off with a broken right rear suspension. Michael Gans parked his Lola T290 at the end of the first lap with a broken gearbox. It was Leo Voyazides (Lola T70 Mk3B) standing last on the grid (the ride-height of Lola car was not in accordance with the rules) who stormed through the field and took first position. Simon Hadfield just had to finish the job and succeeded. Jason Wright finished second followed by Paul Gibson both in a Lola T70 Mk3B.

FIA Masters Historic F1 Championship
In the first race of the FIA Masters Historic F1 Championship 19 cars appeared on the starting grid. On pole position was Martin Stretton (Tyrrell 012). The race was just started when a severe accident happened in the Arie Luyendijk-curve. French driver David Ferrer lost control of his March 701 probably due of a mechanical failure. It was a severe crash and the race was red-flagged immediately. Rescue and medical staff were almost immediately on site to get David Ferrer out of the badly damaged car. He had to be resuscitated before he could be transferred to a specialist trauma hospital in Amsterdam. Sadly David passed away from injuries sustained in the crash on Thursday the 7th of September. Not knowing the tragedy to happen after a few days the second race on Sunday was won by Martin Stretton by 11 seconds on Michael Lyons in his Williams FW07B. Max Smith-Hilliard finished third in a Fittipaldi F5A.

Historic F3 1000cc European Trophy
The 1000cc Formula 3 series was the spiritual successor to Formula Junior and ran from 1964 through 1970. It was the proving ground for those aspiring to climb from amateur status to the professional level of motorsports. Marques like Lotus, Brabham, Cooper and Chevron showed up to the party all powered by tuned Ford Anglia engines. Initially modified to produced in the range of 90 bhp, later development of the engines by Cosworth, Holbay, Techno, and others saw the power climb to over 105bhp produced at a rarefied 10,000 rpm. Even at the very high state of tune, the engines were generally very reliable and required only one rebuild per season. Shortly before qualifying the rain set in and most of the 31 competitors changed to wet tires. Drivers Geoffroy Rivet (March 703) and Jon Milicevic (Brabham BT21B) showed their skills in these tricky conditions, securing pole 1 and 2 followed by Francois Derossi (Chevron B17). Milicevic lead early in race 1 ahead of Rivet and Derossi. Unfortunately Milicevic's engine lost power after just a few laps while Rivet was shown the black flag as he had not seen the signs for a drive through penalty early on. In the end Derossi won ahead of an impressive Smith who stormed to second from 13th on the grid. Milicevic started race 2 on Sunday in Paul Waine's DeSanctis and Rivet had to start from from the back of the grid. After a clear start, the race soon settled at the front with Derossi, Smith and Gallo pulling away and Milicevic and Rivet fighting their way through the field. It was the last lap when drama struck for Derossi and Gustafson approaching the last chicane. Derossi and Gustafson collided, forcing both cars to retire and thus handing victory to Smith ahead of Gallo, Pangborn and Scott. Milicevic finished in 5th position.

NK GTTC
This Dutch championship is organised for Gran Turismo and Touring Cars, built between 1966 and 1981. All cars must comply the FIA's homologation papers of their era. The variety of cars is huge and that also explains the popularity of this championship for the spectators. To name a view marques and types of cars; Porsche Carrera RS, BMW 2002 Ti, Simca 1000 Rally, Ford Escort MkI, Golf GTI. During this weekend 52 cars competed in 2 two races. Fastest during the qualification were Leonard Stolk and Lex Proper both in a Porsche 911 Carrera RS. During the first race both Porsches took the lead but it was Eric Holthausen in the awesome BMW 3.0 CSL who could pass Lex Proper halfway the race. In the race on Sunday, the Porsches proofed themselves again by filling the podium ( first Lex Proper, second Leonard Stolk and third Gerd Rijper).

Pre-War Sport Cars
Just 12 pre-war sports cars entered the qualifying session. Marques spotted on the grid were Bentley, Frazer Nash, Invicta, Alvis, Delahaye and aHotchkiss. Quickest was Charles Gillet in a 1929 Frazer Nash Supersports, followed by a Alvis Firefly 4.3 from 1933 driven by German Rüdiger Friedrichs. At the start Friedrichs took the lead but after ten minutes he was passed by the Frazer Nash Super Sports driven by the couple Charles Gillett en Andy Williams. Finishing in 7th position was the Hotchkiss AM80 driven by Steve Smith, a most impressive result considering that the engine block was ruined during the race at Silverstone a month ago. The engine-block was laser welded and reassembled two weeks ago.