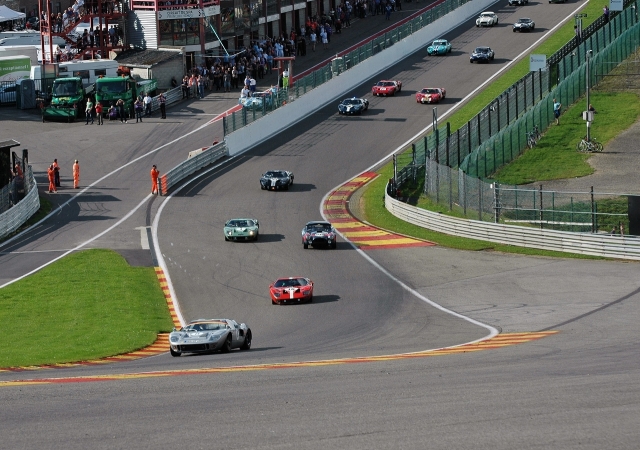 Sheltering from the heavy rainfall and thunderstorms in one of the old pit boxes during the Six hours race on Saturday-evening, the 22nd edition of the Spa Six Hours reminded me of the same race four years ago. Also in 2010 the clouds bursted open just before eight o’clock. On Sunday these reminiscings were even strengthened as the weather turned out to be the same as the Sunday four years ago.
The Six Hours race
Arriving on Friday afternoon the weather couldn’t have been better, sunshine and 20 degrees Celsius. 12 Ford GT40s, 13 Jaguar E-types, a dozen of Mustangs, 4 Ford Falcons, 10 Porsche 911s, 5 Lotus Elans, 7 MGBs, 4 TR4s, two Aston Martin DP214s, 2 Mini Coopers and even a Ferrari 250 GT SWB started the 90 minutes qualifying session on Friday at 18.30 hrs. The first seven places were taken by Ford GT40s of which the German Christian Gläsel and former Indy 500 winner Kenny Bräck claimed the pole position for the race on Saturday. Last year winners Leo Voyazides-Simon Hadfield started from the second row (fourth position). Fastest non-GT40 was the TVR Griffith driven by Sean and Martin McInerney.
During the start of the race, Saturday-afternoon at 4 o’clock, the weather turned out even better with temperatures rising to 24 degrees. But soon the weather radically changed and the first showers fell. Quite soon after the first accident happened, a Shelby Cobra lost control on the straight in front of the F1 stands and hit the wall. The Cobra was able to enter the race again and while the driver waited a Lotus Elan drove into the Cobra. After a minute or so the Sidery-Smith/Knight MGB lost control and crashed into the Elan ! All the drivers escaped unhurt but these crashes brought the safety car on the track and a lengthy neutralisation followed. As darkness fell, the weather further deteriorated into extremely violent rain storms and thunder and lightning. No surprise that more accidents happened. Another Lotus Elan and a Triumph TR4 went off at Raidillon and the most the impressive crash took place at Blanchimont where a Jaguar E-Type driven by Le Breton-Snowdon-Campbell Walter drove off-track and damaged the complete back end of the car.
The massive rainfall during the six hours caused five neutralisations of the race in which the safety car was on the track. One would almost forget that a race was going on, the equippe Kenny Bräck/Christian Gläsel went into the lead for a long time but 3 (!) drive-through penalties allowed the Ferrão/Stretton GT40 to take over the lead during the fourth hour of the race followed by the Wills/Littlejohn GT40. By then, last year winners Leo Voyazides and Simon Hadfield were in third position but in the final hour of the race they managed to overtake the Wills/Littlejohn GT40. A final rain-storm obliged the race-director to show the red flag some ten minutes prior to the official finish of the race. So, Stretton and Ferrão won the race ahead of Voyazides/Hadfield and Wills/Littlejohn, Christian Gläsel and Kenny Bräck finished fourth. Behind the four GT40s, Graf Von Oeynhausen and Dirk Adorf completed the top-5 with their Jaguar E-Type. A remarkable result was the 7th position overall and first in class for the Lotus Elan 26R entered by Graham Wilson and shared with Andy Wolfe and Oliver Stirling.

Woodcote Trophy and the Stirling Moss Trophy
Just like in the precious years of the Spa Six Hours, two race series, originally created by Motor Racing Legends, were combined to form an impressive 53-car field: the Woodcote Trophy and the Stirling Moss Trophy. Launched in 2006, the Woodcote Trophy races are for genuine sports-racers of the post-War era, up to and including December 1955, with cars conforming strictly to period specification. The Stirling Moss Trophy is for genuine, pre-1961 sports cars and sports racers. This 60-minute race includes a mandatory pit stop for a drivers-change. Pole-sitter was Bobby Verdon-Roe in the ex-Phil Hill/Wolfgang von Trips/Rodriguez brothers N.A.R.T. Ferrari Dino 246S. Chris Ward (Lister-Jaguar Costin) stood next to him on the grid. An excellent third position was for the Lotus 17 Prototype driven by Kremer and Martin Stretton. Ward and Verdon-Roe chased each-other for a long time but after the pitstop the Ferrari’s lap-times became longer and longer, caused by a problem with the gearbox. So it was a victory for Chris Ward and a second place for the Ferrari Dino 246S. Mark Piercy (Cooper Monaco) finished third, ahead of the Knobbly-bodied Lister-Jaguar of Tony Wood and Will Nuthall.

The FIA Masters Historic Sports Car Championship race was dominated by the Anglo-Greek pair Leo Voyazides/Simon in the Lola T70 Mk3, although their lead against the other T70s was wiped out when the safety car entered the race. A clever pit stop of Leo (and Simon taking over the wheel) secured the lead again ahead of Manfredo Rossi di Montelera (Abarth-Osella) and Richard Meaden/Martin Stretton (Lola T70 Mk3). New Zealander Roger Wills droven a brilliant race as he moved his McLaren M1C into second position ahead of Jason Wright's Lola T70 Mk3. Fourth positionfell to Steve Tandy (Lola T70 Mk3B) ahead of Rossi di Montelera.

The official FIA Historic Formula One Championship, brought together 16 F1 cars from the 70s and 80s. The first race on Saturday was won by Martin Stretton (winner of the Spa Six Hours later the same day). He drove the ex-Alan Jones Williams FW07B and was able to shake off Simon Fish (Ensign N180) during the first 5 laps. Stretton didn’t enter the sunday's race, which began behind the safety car due to very wet track. After the safety car left the track Steve Hartley drove away from Christophe D'Ansembourg (Williams FW07) and Ian Simmonds (Tyrrell 012). Rossi di Montelera finished second ahead of Hartley.

In the first race for the older Grand Prix cars (of the Historic Grand Prix Cars Association) the victory went to Peter Horsman in the Lotus 18/21. On Sunday the second race took place on a soggy piste and it was Julian Bronson in the spectacular 1960 Scarab Offenhauser 1960 who was the overall winner followed by Peter Horsman and Rod Jolley in the Lister Monzanapolis.