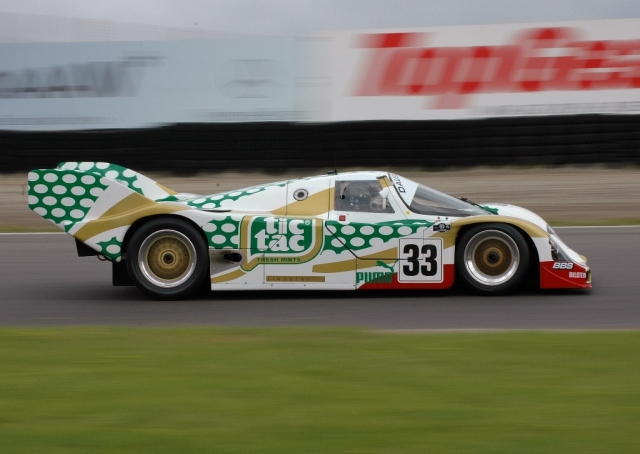 Text and photos by Guus Docen After the successful first two editions of the Historic Grand Prix Zandvoort, the third edition was also a huge success. Over three days 50.831 visitors witnessed a stunning racing festival, where the rich racing history of Zandvoort stood central. Matches with historic formula, touring and sports cars from the period 1948-1985, formed the main part of the program. There were also lots of demonstrations and presentations, autograph sessions with prominent (former) drivers and a parade on Saturday with racing cars from the circuit to the historic center of Zandvoort.
Historic Grand Prix Zandvoort 2014 - 29, 30 and 31 August 2014


Group C / GTP Racing Championship
The premiere of the Group C / GTP Racing Championship class at Circuit Park Zandvoort, with legendary cars from the long-distance racing in the eighties and early nineties was a success although the number of cars was a bit disappointing: 11 cars were racing on Saturday and just 10 cars on Sunday. The most famous Group C racing car in the Netherlands is probably the Jaguar XJR-9LM in which Jan Lammers in 1988 won the 24 Hours of Le Mans. Porsche was the most successful manufacturer, with the legendary Porsche 956 and 962. The starting grid for Group C Racing included sport prototypes of the caliber Porsche 962, Mercedes C11, Nissan R90CK and various models of Jaguar and Spice. The Saturday-race was won by Stefano Rosina in the Nissan NPTi90, on Sunday it was Michael Lyons in the Gebhardt C91 who took the chequered flag. The Mercedes C11 driven by Gareth Evans had numerous mechanical problems on Saturday and finished 11th. On Sunday the car was repaired and Evans finished second. The Jaguar XJR16 driven by Richard Eyre, became third twice.

Back to the basics: 500cc Formula 3
The "500"s began in 1946 as a way for "impecunious enthusiasts" to go motor racing using 500 cc motorbike engines instead of the larger capacity engines that prevailed prior to the war. The idea caught on and was adopted as a new Formula 3 in 1950. Well known names raced in 500s including Stirling Moss, Ken Tyrrell, Ivor Bueb, Jim Russell, Les Leston, Peter Collins, Don Parker, Stuart Lewis-Evans and even Bernie Ecclestone!
Although it was the domain of enthusiasts and builders, the factory machines like the Cooper Mk V and Kieft dominated the 500 races. Almost every engine was spooned into the 500cc Formula 3. To name a few marques, Norton (Manx), BMW, JAP, Matchless, Gilera, Ariel Square Four, DKW, DB Panhard. But a Manx Norton engine was the best by far. As Norton didn’t sell a single engine, the more affluent manufacturers had to dig deep into their pockets and buy a complete bike. At Zandvoort 23 cars appeared on the starting grid for two races. George Shackleton (Cooper Mk11) won the race on Saturday. It was Darrell Woods who chased him during all the 6 laps but he didn’t succeed to pass him and finished second. In the Sunday race the battle for the podium was between Brian Jolliffe (Cooper Mk9) and again Shackleton. Jolliffe won and Shackleton crossed the finishing line within a second.

HGPCA races
Julian Bronson’s trip to Zandvoort became a personal celebration as the portly Brit won both races in the Scarab Offenhauser in the race for pre-1961 Grand Prix cars. Philip Walker (Lotus 16) and Rod Jolley (Lister Monzanapolis) followed Bronson’s tyre marks on the tarmac and changed position almost every lap. There weren’t just British drivers in the HGPCA-races as the Dutch female driver Shirley van der Lof drove a HWM provided by owner Adrian van der Kroft. It was Shirley’s grandfather Dries van der Lof who drove also an HWM at Zandvoort in 1952 ! She showed her skills as she finished in fifth position just behind Dutchman Jos Koster in his blue Maserati 250F. Shirley's father, Alexander van der Lof raced the red Maserati 250F on Sunday. He had to start from the back of the grid rear because the car couldn’t drive the first race on Saturday. On the Saturday morning the car dumped a big puddle of coolant on the tarmac so it was decided to have the engine examined and repaired. On Sunday Alexander stormed through the field to ninth place.
Jason Minshaw was just like last year unbeatable in both races for pre-1966 Grand Prix cars. He started slowly, with the fourth fastest time in qualifying, but he knew that was due to lack of sleep he'd had. "It's about who is the front at the end and not who is the front at the start," said the Brit, who proved his words by winning both races in his bright blue Brabham BT4. Miles Griffiths (Cooper T51), Jon Fairley (Brabham BT11), Peter Horsman (Lotus 18/21) and Andy Middlehurst (ex-Jim Clark Lotus 25) could only the see the back end of the BT4 from their cockpits.

Gentlemen Drivers 90-minutes race
The most thrilling race of the weekend was the Gentlemen Drivers 90-minutes race Saturday-afternoon. The battles were between 5 AC Cobra’s, the Bizzarini and a Lotus Elan. Former Caterham Formula One driver Dutchman Giedo van der Garde made his historic racing debut in the Gentlemen Drivers race. Van der Garde drove an AC Cobra, owned by and shared with fellow Dutchman Hans Hugenholtz. This race was Giedo's first one since his 18th place finish in last year's Brazilian Grand Prix. German Frank Stippler drove Georg Nolte's exotic Bizzarini 5300GT, driving from pole position he led from the start but his pitstop was three seconds too short and he received a stop and go penalty. His stop-go was to short as well, so a further penalty followed. For a long time Rob Hall (AC Cobra) was close behind the Bizzarini and got into the lead when Stippler had his stop-go penalties but suddenly Hall spun of the track and Tom Coronel (AC Cobra) took the lead, Hall recovered to run second ahead of Coronel but then the fan belt broke on the Hall Cobra putting him out. That allowed the AC Cobra of David Hart/Tom Coronel to be sure of the victory. Despite the penalties Stippler ended in second place with Leo Voyazides/Simon Hadfied (AC Cobra) third. Van der Garde had to retire when a stone found its way between the gearbox linkage which blocked the gearbox into second gear. Worthwhile mentioning is the brilliant driving of Martin Stretton in Mark Martin's Lotus Elan which suffered from a badly damaged rear end from almost the start of the race. Stretton secured sixth place while Philip Walker/Miles Griffiths drove the tiny Lotus XI into seventh place.

FIA Masters Historic Sports Car Championship race
Twenty-eight cars lined up for the 60-minute Masters Sports Car race of which eight cars were Lola T70s. The teams David Hart/Martin Stretton and Leo Voyazides/Martin Stretton both in the Lola T70 Mk3B dominated the race. The result of the race was decided by the pit stop of both teams. Simon Hadfield took over from Voyazides in a shorter time than Martin Stretton relieving Hart, this allowed Hadfield to take the lead and win the race. Stretton/Hart finished second followed by the Italian driver Manfredo Rossi di Montelera (Abarth-Osella PA1).

FIA Masters Historic Formula One
Twenty-three Formula One cars competed this weekend in tow races. Michael Lyons was the star of the FIA Masters Historic Formula One Championship taking two wins in his Hesketh 308E. He out dragged Simon Fish (Ensign N180) in the first race on Saturday. Fish spun the Ensign and that allowed Greg Thornton (Lotus 91/5) to get into second spot with Fish recovering for third position. Lyons took honours again on Sunday followed by Christophe D'Ansembourg (Williams FW07) and Simon Fish.

Formula Junior
David Methley (Brabham BT6) won both Formula Junior races for the FIA Trophy. In both races he drove far away from his opponent Jonathon Hughes (also in a BT6). On Saturday Manfredo Rossi (Lotus 22) occupied the final podium place. On Sunday it was Mark Pangborn (Lotus 20B) who finished third.

Classic car enthusiasts enjoyed a fantastic weekend, opening with a rain sodden track but finishing under a clear sky with above average temperatures. They are already lookingforward to the fourth edition of the Historic Grand Prix Zandvoort next year