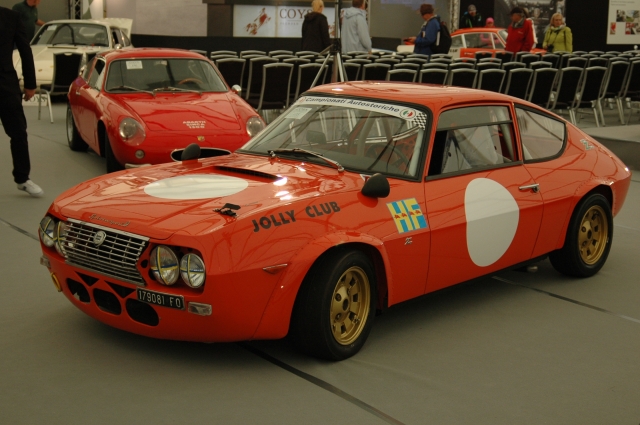 On Saturday, at 16.00 hrs. the Coys auction started in the big tent in the middle of the Grand Prix circuit. Fifty classic cars were noted in the Coys catalog, but around twelve 12 extra cars were added. To sell these so-called late entries is sometimes difficult as there’s no chance for interested bidders to inform themselves about the cars, they are forced to bid spontaneously. Despite some of these entries got a new owner, like the Alfa Romeo Junior Zagato 1300 for 29,900 euros or a 1926 Fiat 509 MM, which was upgraded in the 30s with a compressor, for 72,900 Euros. Most of the cars were sold under the estimated price. A Fiat Dino Coupe 2400 went for 26,450 Euros or a 1966 Jaguar E-Type Roadster Series 1 4.2 litre for 123,500 Euros. Particular interesting were the four Mercedes SLs with extremely low mileage. The 1978 450 SL with just 3464 miles on the clock found a buyer for 65,200 Euros. The even more attractive 380 SL with only 12,721 miles from new, went for 55,200 Euros.
The Porsche 911 S/T offered for sale looks similar to the 911 RS but the Porsche connaisseur knows better when he spots the year of manufacture and notices some details of this car. The S/T is a special racing version of the 911 S, to reduce bodyweight most of the interior trim was removed. Missing also were the engine cover and front cover locks, these being replaced by rubber fasteners. There was no soundproofing or under seal, and even the amount of paint used was kept to a minimum. All in all, 49 cars were produced and the earlier engines were all based on the 2,2 litre engine pushed to 2381cc, delivering 250 Bhp. The actual car was delivered to its first customer Herr Grüner on the 9th of February 1970. According to Porsche factory archives it was the 6th completed S/T by the Porsche race-department. As with so many of the S/T cars, they were raced in period and this car was no exception. In the restoration of this car no expense has been spared to achieve a car that is exactly as it left Werk 1 in 1970. There are engine bills amounting to €150,000. The bill for the paintwork is over 25,000 Euros. Most significantly the car was in Walter Röhrl's ownership between 2009 and 2011. The estimated price was between 900,000 to 1.1 million Euros, the car was sold for 849,000 Euros - still a steep price.

A very pretty 1971 Ferrari Dino 246 GT finished in the colour giallo fly, didn’t sell, the highest bid was 215,000 Euros. The estimated price was 270,000 - 300,000 Euros as the car underwent a full restoration in 2011 and had only 70,000km recorded. The potential bidders were a bid distant when they were informed that the chassis no. 2252 was dubious. The Dino was stolen in 1978 and the number 2252 appeared on the car after that time. It was believed that the car may well be originally constructed under the chassis no. 06720. For any buyer it would be the responsibility to confirm the original identity and to arrange the car to be re-stamped under the Ferrari Classiche programme ‘Ferrari Classiche Certified’.

Specially flown over from the United States for this auction was the Ex Alan Jones 1977 Shadow Formula 1 DN8-4A. Don Nichols, the founder of Shadow, kept DN8-4A in his warehouse since 1978. This DN8-4A was extensively restored in 2013, including a freshly rebuilt DFV engine. Don held on to his marquee cars with intention of building a Shadow Museum. Recently he had decided to offer his prized collection for sale. This very original F1 was estimated at 370,000 - 420,000 Euros. The new owner paidat 354,500 Euros. A 1973 Lola T292 with FIA Papers was estimated at 230,000 - 260,000 Euros. This intensively raced sportscar was in superb condition, race ready and on the button and had just come from its regularly engine and chassis revision in July 2014. It was sold for 228,000 Euros. On offer was a 1954 Lancia Aurelia B 20GT Series 4, uprated to works specification of the actual car driven by Gino Valenzano in the Mille Miglia in 1954. Gino Valenzano drove this car himself in the Mille Miglia retrospective event before he died in 2011. Estimated between 160,000 - 180,000 Euros, the new owner paid 151,000 Euros. Text and photos by Guus Docen

*The mentioned prices include the buyers premium