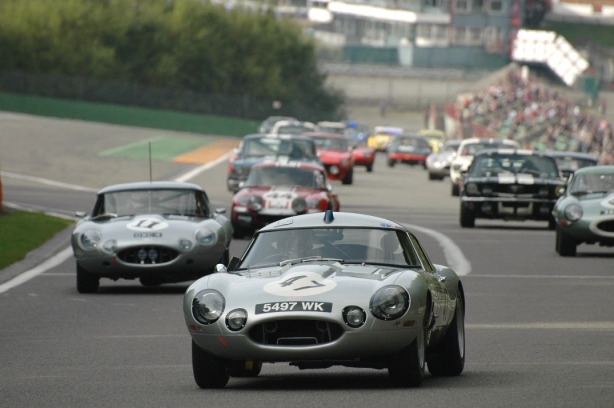 With some 109 classic cars on the grid, the 2013 edition of the Spa Six Hours endurance race brought back memories of 1966 Le Mans 24 Hours. In that specific year 3 Ford GT40s finished first, second and third. Also in 2013 the GT40 was the favourite machine for drivers with winning ambitions for the 360-minute endurance race at Spa as 10 examples of this fine machine were entered. Eight of them qualified in the top ten of the grid.
Six Hours Endurance race
Pole position was claimed by the Brack/Ellerbrock/Glasel GT40 followed by the equippe Kjallgren/Littlejohn. Last year’s winners Simon Hadfield and car-owner Leo Voyazides started from third position in their red GT40 number 1. Only the Scragg/Bussell/Jones-Nicol E-type and the Dutch Corvette Grand Sport with 1988 Le Mans winner Jan Lammers, Michiel Campagne and Allard Kalff managed to get amidst the Fords as they claimed a fifth and sixth position on the grid. From the start Christian Glasel managed to drive away from last year’s winners, followed by the Walker/Jordan GT40. In lap 34 the Voyazides/Hadfield GT40 was lapped by the Kjallgren/Littlejohn GT40 which moved up to second place. At Spa, filling up is done at the petrol station in the center of the paddock, and with two lanes and four pumps available, queues are easily formed. So the strategy of combining a pitstop and refuelling is extremely important. The best teams have a guy at the petrol station informing the pit crew if there are any queues. After a considerably shorter stop than the frontrunners, the Dutch Corvette Gran Sport took the lead in lap 50 in front of the Walker/Jordan GT40 and the Scragg/Bussell/Jones-Nicol Jaguar E-type. Following refuelling stops, driver changes and safety car interventions it was the Brack/Glasel/Ellerbrock GT40 which went into the lead. By lap 93 the Voyazides/Hadfield GT40 and Corvette Grand Sport had caught up with the leader who was not able to shake them off for very long. Again the red GT40 was in the leading position, closely followed by the wild Corvette Grand Sport and former winner Shaun Lynn in his light blue GT40 and these positions remained for the rest of the race. Completing 109 laps, Leo Voyazides and Simon Hadfield were on top of the podium. The duo finished ahead of the Chevrolet Corvette Grand Sport of Michiel Campagne, Allard Kalff and Jan Lammers and the Ford GT40 of Shaun Lynn and Andrew Haddon. Winning its class (GTS 10) was the Lotus Elan 26R of Graham Wilson, Andy Wolfe and Oliver Stirling finishing a stunning 7th overall, the only non-V8 car that made it into the top ten.


Touring Cars
In the U2TC Touring Car race (for cars under 2-litre) the victory went to Jackie Oliver (one of the founders of Arrows) and Martin Shaw in his BMW 1800 TiSA, second and third positions were claimed by the Ford Cortina Lotus cars of Bryant/Wolfe and Tromans/Meaden, whilst the Alfa Romeo Giulia Sprint GTA, driven by Furiani and Gläsel, just failed to reach the podium. Also the Masters Series had their Touring Car race, the so-called ‘’Top Hat“ features both GT cars and Touring cars built before 1975. There are four distinct classes according to the cars’ periods and specifications. So this is a much broader field with cars like Porsche 911 RSR, Jaguar E-Types and Lotus Elans. Even two Ferraris 308 Gts were entered for this race. No wonder the Lotus Cortinas and Mini Coopers didn’t finish within the top 10. It was the well known yellow Porsche 911 RSR of Mark Bates finishing first, he provided from the mandatory pit stop during a neutralisation period. The Escort RS1600 driven by Dan and Ron Brown finished second and the Jaguar E-Type of Harry Wyndham third. The pre-’66 victory went to the Ford Falcon of Simon Hadfield and Leo Voyazides, of course!


Masters Historic Sports Cars
An impressive 49-car field for the Masters Historic Sports Car championship round brought a sensational cross-section of the most important sports cars of the 1960s and early’70s. Eleven Lola T70s qualified themselves on Saturday and six of them occupied the three front rows at the start. It was the second victory this weekend for Leo Voyazides and Simon Hadfield in the Lola T70 Mk3b leaving just a gap of 2.3 seconds ahead of Steve Tandy in the same type of car. The McLaren M1C of the New-Zealander Roger Wills completed the podium, whilst Marc Devis grabbed 2nd place in his class at the wheel of the De Tomaso Pantera Gr.4.


Single seaters
Fourty-three members of the Historic Grand Prix Cars Association were present with the oldest single-seaters this weekend at Spa. In the first race on Saturday it was John Minshawin his Brabham BT4 who finished just one second in front of Peter Horsman’s Lotus 18/21 and the Cooper T51 of Miles Griffiths. The latter took revenge on Sunday and won race 2 followed by the Brabham BT7A of the German driver Max Blees and the Lotus 32B of Chris Locke. Just like the race meeting at Zandvoort three weeks before, the Historic Sports Car Club had their Open Wheel race at Spa, with the expected domination of the F2 cars. It was a double victory for Mark Dwyer (March 742), finishing twice in front of the Chevron B42 of Grant Tromans and Martin Stretton.
Masters Gentlemen Drivers
This racing weekend came to an end with a semi-endurance ninety minute race of the Masters Gentlemen Drivers competition, the opportunity for an ultimate confrontation between the drivers of Cobras, Jaguar E-Types and a Sunbeam Le Mans Tiger. The last victory was for Frenchman Ludovic Caron (Cobra Daytona Coupé) in front of Graf Markus Von Oeynhausen (Jaguar E-Type) and Voyazides-Hadfield (AC Cobra). The Sundeam Tiger drivers Chris Beighton and Tony Eckford were out of the race in lap 13.                                                    Text and photos by Guus Docen