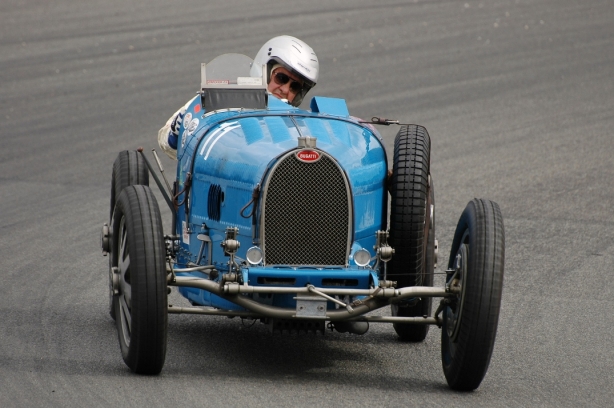 The first edition of the Historic Grand Prix Zandvoort last year, was a great success . As many as 31,500 spectators enjoyed themselves at Circuit Park Zandvoort. This event thus demanded an immediate permanent place on the historic racing calendar. During the second edition a total of 45,901 spectators passed the gates of Circuit Park Zandvoort. Enthusiasts from all over the country and even abroad celebrated the rich history of the Dutch circuit with races for historic single-seaters, GTs, touring cars and sportscars. Some well-known drivers were present at Zandvoort, German ex-Le Mans winner Jürgen Barth, Dutch drivers Arie Luijendijk, Jan Lammers, Michael Bleekemolen, Toine Hezemans and Tom Coronel and renowned car designers Adrian van Hooijdonk and Harm Lagaaij. Avid racer and car enthusiast Brian Johnson, lead singer of the hard rock band AC/DC, was behind the wheel of a Mini Cooper S.
Single seaters
Virtually all racing classes which took part during the first edition, had enthusiastically set for the 2013 edition. This meant that there were three fields with Formula 1 - Grand Prix Cars. The Grand Prix Masters appeared with Formula 1 cars from the period 1966-1985. The Grand Prix Cars pre '66 was for Formula 1 cars from the years 1961 to 1965. The Grand Prix Cars pre '61 relived the period from the 20s to 1961. Two other single seater classes at Zandvoort were the Formula Juniors and the Formula 2 cars.


Historic Grand Prix cars pre ’61 and pre ‘66
Eighteen cars appeared on the grid for two 30 minute heats. Five of them were Cooper-Bristols, Cooper T43 and T45, Scarab Offenhauser, Maserati 4CM and two Maseratis 250F. Dutchman Alexander van der Lof raced a Maserati 250F, this car was bought by his father in 1975 and has been in the family ever since. The Maserati 250F is equipped with a 2.5 liter six-cylinder with dual ignition, good for 270 hp . The car is completely original still in immaculate condition. Van der Lof realized that he had no chance for a place in the front field. Nevertheless, he succeeded to finish sixth overall in the second race just four seconds behind the Maserati 250F driven by Allan Miles. During the first heat Brian Maile rolled over his Cooper T41 twice when a rear tyre burst on the exit of the Audi-S chicane. It was a miracle that he escaped unhurt as his car didn’t have a rollbar fitted. The skidmarks were clearly visible on his helmet. The car itself looked surprisingly undamaged when the car was pulled over on it’s wheels again. It was even possible to tow the car back to the pits !     Philip Walker won both heats in a 1959 Lotus 16. Jason Minshaw was an easy double winner in the pre-66 category,driving a 1962 Brabham BT4. Second was Miles Griffiths in a Cooper T51.


Dutch Historic GT & Touring Car Championship
The Dutch Historic GT & Touring Car Championship (with 51 cars the largest grid) promised to be an exciting race. During practice several Ford-V8 powered cars suffered with engine problems. Hans Hugenholtz couldn’t drive his Ford GT40 and tried his Shelby Mustang but an engine failure dropped him to the bottom of the starting list. The Shelby specially hired for this race by Jip van Putten didn’t qualify, so he switched for the race to his Corvette. German Wolfgang Schachingers Ford Mustang suffered from a leaky head gasket. After 25 minutes qualifying Georg Stummeyer in a Ford GT40 put his car on pole poistion. A historic GT is not an Indycar but guest-driver Arie Luijendijk placed the Bizzarini 5300 GT (owned by Alexander van der Lof) on a second pole position. He was followed by Graham Wilson in a Lotus Elan. Remarkable was the fourth position of Rob Bergmans in a Iso Rivolta.At the start of race 1 Stummeyers GT40 stormed away from the other cars. After a few laps Mark Dols lost control over his MGB and the car slipped around, crossed the tarmac diagonally, drove into the barriers on the inside of the corner and rolled over twice. The Safety Car entered the track and after Dols was saved from the remains of the MGB, the race was released. With eight minutes to go it seemed to be an easy victory for Stummeyer. However, the organization decided otherwise and gave him a drive-through penalty for overtaking during the time that the safety car was on the track. Arie Luijendijk went into the lead , closely followed by Bergmans. In lap 8 Graham Wilson drove the Elan to its limits, first he passed Bergmans, then he also passed Luijendijk. After 10 laps Wilson was flagged as the winner, with crowd favorite Luijendijk second followed by Bergmans


Formula Junior
During the Historic Grand Prix Zandvoort the beautiful shiny Rayberg Formula Junior driven by Floris-Jan Hekker attracted much attention. It’s a one-off, partly built with parts from Cooper. The chassis and bodywork were developed by the brand itself. He bought the formula car in 1984 and finished the restoration almost 25 years ago and immediately started racing the car. In the beginning, the car suffered many problems but they were solved and he used it until 1990. After 23 years of storage he prepared the car again and got it race-ready this year. This weekend he still finished third in his class (thirteenth overall). Overall winner of both races was Peter Morton in his Lightning Envoyette.


Masters Gentlemen Drivers and World Sportscar Masters
For the 90-minute Masters Gentlemen’s Drivers Race for Pre-66 Sports Cars David Hart and Tom Coronel in the AC Cobra started from pole-position but after 18 laps the party was over as the driveshaft broke. During qualifying exactly the same failure happened with the sister-car of Hans Hugenholtz. In the race they had to start at the back of the grid but during the race they stormed through the field and managed to finish fourth in a race won by Rob Hall, ahead of Leo Voyazides and Simon Hadfield, all in Cobras. Team Retro-Speed members Graham Wilson and Andy Wolfe finished third in their Lotus Elan 26R. In the FIA Masters Historic Sportscar Race, David Hart’s Lola T70 took the lead in lap 1, after just 16 minutes he had to made a pitstop as the gearbox gave troubles. The pit crew couldn’t fix the gearbox so David had to withdraw. The white and blue, Voyazides/Hadfield Lola T70 took the chequered flag some 45 seconds ahead of Manfredo Rossi di Montelera (Abarth Osella PA1). Steve Tandy made it into third.