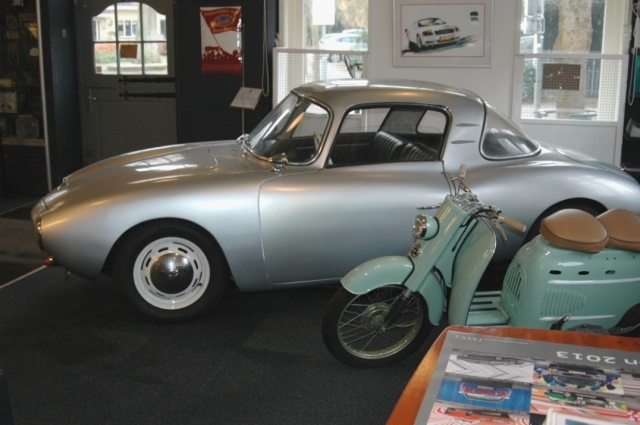 In the centre of the picturesque village Bergen in the Netherlands, resides the Dutch Auto Union museum. This small museum houses historic cars and motorbikes of the brands Auto Union, DKW and Tornax, which have been collected over a long period and restored by Mr. Henk Geerts. The vehicles from the collection of the museum are from the 1931 to 1965. It is the only museum that is recognized by Audi AG. Sadly, on the first of November 2013, Henk Geerts passed away, at age 82. What will happen with this unique collection of two stroke-engined motorcars?
The Start
Born in the east of Holland, farmer's son, Henk Geerts settled himself in Bergen in 1975 and established a shop in household appliances, luxury items, DIY equipment, gardening tools and furniture.Forced by competition, Geerts started his famous cooking and kitchen shop. As a real 'boffin,' he also introduced the first induction frying pans with special grip-handles for disabled people. His interest in cars, and especially DKWs started already when Henk was eight years old when the neighbors owned a yellow and black DKW F8 convertible.He liked this car so much that it was his wish to own one himself. The first DKW he bought was an F7, a convertible limousine with beechwood body. In this car Geerts travelled almost half the world. In 1991 he travelled to Kiev, via Warsaw and Moscow, Budapest and back again, a total of 8100 kilometers. Two years later he drove the U.S. Route 66, more than 6,000 kilometers. In 1977 he was able to buy the model of his dreams, the F8 Front Luxus four-seater cabriolet. Immediately the restoration of this car started and soon after Henk began to gather a wide range of DKW and Auto-Union convertibles. Behind his store he created a workshop. If there were no customers in the store, he worked on the cars but if someone entered the store, a bell rang in the workshop and he quickly attend to the customer. On reaching the age of retirement, combined with the introduction of the euro was a good time for Henk to close his shop. Allowing him to spend time on his life long passion: DKW motorcars, motorbikes and mopeds. Sometimes assisted by skilled friends, he restored the collection of scruffy DKWs into beautiful specimens, which he proudly exhibited.


The Museum and the collection
With lots of effort from Henk and the volunteers, within a period of three years the shop was converted into a museum, the official opening was in 2003. The vehicles from the collection of the museum are from the period 1931 to 1965. There are 15 cars and 10 motorcycles (of the brand DKW and Auto-Union) on display. They are all in good, restored condition, but not unique. Most of them are also in the collection of the Audi works museum - the Museum Mobile - Ingolstadt and in the August Horch Museum in Zwickau. However, this doesn’t apply for two cars in the collection. Although they have DKW technology under the hood, both are different marques. One is a 1934 IHLE Roadster. Observing the front it looks like a BMW. Under the green-white DKW logo we see a grill in the shape of two kidneys. The IHLE Company made several bodies for BMW and provided them with this style element and for the DKW it was no different. The other special car is the 1934 Tornax Rex Roadster 2. The motorcycle manufacturer brought out a sports car based on the technique of the DKW F4, with two cylinders and an engine capacity of 700cc. Hebmüller took care of the leather-cloth covered body with only one door (!). When DKW cancelled the engine supply, the production of the REX ceased, just 150 cars were produced. The latest car on display (since April this year) is a DKW Monza. This is also a unique example, as it is the only car of this type in the Netherlands. The DKW Monza was built on the chassis of the successful DKW 3=6 coupé. Just 230 Monzas were built and it features a fiberglass body fitted to the chassis and it is equipped with the same engine as the coupé. That engine was a 900cc two-stroke unit producing about 40hp. However, the Monza was much faster than the coupé due to far better aerodynamics, and a weight of just 780 kg. The name 'Monza' refers to the Italian circuit, where in 1956, with this model, with a beautiful streamlined body, plenty of speed and endurance records were established. After a major restoration of two years the car is now as good as new. Another rare gem is the polished mahogany speedboat, equipped with (of course) a DKW engine. This boat is so special that the Audi Museum Mobile has borrowed it for one of its temporary exhibitions.