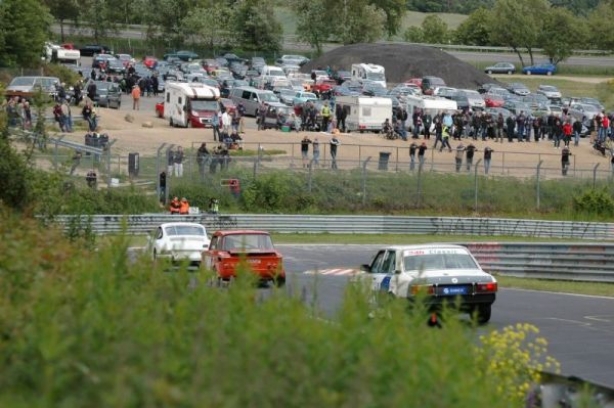 row 1
About 18,000 visitors enjoyed three days of historic motor sport at the Nürburgring Grand Prix track and the 22 kilometres Nordschleife. Whether on two, three or four wheels, the 26th edition of this event offered an entertaining program about a century of automotive fascination. One of the highlights was the largest ever meeting of the Veritas sportscars and their owners in the renovated old pits square.
180 minutes Eifelrace
Saturday-afternoon a 180 minutes endurance race at the combined Grand Prix track and 22 kilometres Nordschleife started. Actually two championships were contested in one race. In the FHR Dunlop historic Touring car and GT-Trophy, 57 cars built between 1966 and 1971 competed. The other championship was the Youngtimer Trophy with 89 competitors. Considering that in the Youngtimer Trophy cars built between 1970 and 1990 are allowed, it’s quite a mixed field of cars. Not surprisingly not less than 30 Porsches 911 were entered, in all kind of versions, but there were also Porsches 924, 944 and 928. Other types of cars in this race were BMW 2002, Alfa Romeo 2000 GTaM and Alfa Giulias but also BMW 325i and M3. Luckily some exotic machinery appeared in this race like a Fiat-Abarth 1000 OTS Coupé and a low drag E-Type Jaguar. Overall fastest in pratice was last years winner Michael Schrey in a Porsche 911 Carrera RSR, He couldn’t repeat his performance of last year because engine problems forced him to withdraw. Also in the FHR Trophy the 911s were as reliable as ever so three 911-drivers were lucky enough to make the podium.


Battle of Dwarfs
Always a joy to watch is the race of small cars because competition is strong and at the corners the roadholding of these cars is spectacular. Accelerating out of a corner, the Fiat-Abarth will lift it’s inner front wheel while the Mini Cooper will lift it’s inner rear wheel. But there were other types of cars like the NSU TT, Steyr-Puch 650 TR, Autobianchi A112 Abarth, Fiat 127 and Fiat 128s (not so dwarfy). This series of races is a bit different as it is a regularity championship, so best-in-practice is one thing but to win the race a driver has to be able to drive very consistently. In the second lap of the race all drivers set their reference-laptime which they have to match during the rest of the race. Any difference results in penalty-points being awarded and at the Grand-Prix track each tenth of a second difference caused a penalty point. So being first at the checkered flag doesn’t mean winning the race. During practice UK-driver Gerald Dale and German Thomas Klingelhöfer proved that for the best laptimes a Mini-Cooper is needed. But during the two race-heats Throsten Babon in a Fiat 127 and Roland Müller in a NSU TT proved that to win a regularity-race a very precise and consistent drive style is crucial


Veritas meeting
Veritas was a West German sports car company, founded in 1947 by Ernst Loof, Georg Meier and Lorenz Dietrich. They initially re-built and tuned pre-war BMW 328 cars using components supplied by a customer, turning them into BMW-Veritas cars. The first car was used in 1947 by its owner, famous racing-driver Karl Kling to win at Hockenheim and subsequently become the 1947 German 2-litre champion. After only a few cars were made, following an objection from BMW, the cars became simply known as Veritas. The most successful Veritas was the Veritas-BMW RS (Rennsport Spyder). Approximately 22 were built using the chassis and the 2-liter 'Hemi' 6-cylinder engines of the late 30s BMW 328. A Veritas was converted into a Formula 1 racer known as the Meteor in 1951. It was run under the F2 regulations with mixed results. Veritas produced around 20 - 25 examples of the Rennsport model with 15 examples surviving. The first Veritas to be made for normal road use was made in 1949 with the launch of the Komet coupé which was little more than a racing Veritas RS made street legal. Veritas was very succesful in the German Formula 2 championships but also in the 2-litre sportscar races. The bodies were always made of aluminium and the factory was well known for their excellent craftmanship. Veritas moved to the Nürburgring in 1950 where the company rented the old Auto Union workshops and finally founder Ernst Loof set up a new company called Automobilwerke Ernst Loof and started a new range of Veritas cars at first with the Heinkel manufactured engine and saloon or cabriolet coachwork by Spohn. Money quickly ran out however and the final bodies were fitted with Ford or Opel engines. Just a small number of these cars (approx. 20) were made at the Nürburgring. From 1949 until closing in 1952 a total of 75 Veritas-cars were built.

The meeting at this event was organised by 87-year old Herbert Freese- without any doubt the person with the most knowledge about Veritas sportscars. Not only 30 Veritas sports- and racing cars came to the ‘Ring’ but also some less known marks like AFM, AWE and Baum-BMW were exhibited, all cars using components from the BMW 328. AFM can be regarded more or less as a one-man affair. This is also expressed by the three letters, which simply stand for Alexander von Falkenhausen, München. The Baum-BMW was built by East-German Kurt Baum in 1947. He was the only privateer racer in East-Germany and he managed to design and fabricate an aluminium body for his pre-war BMW 328.


Demonstration-run pre-war cars
Mercedes-Benz Classic organised the pre-war demonstration run to commemorate the first victory of a Mercedes-Benz supercharged sports car at the opening race of the Nürburgring on 19 June 1927. It was during that race that Rudolf Caracciola and Adolf Rosenberger won a surprising dual victory in a Mercedes-Benz type S, paving the way for many race wins in the history of supercharged sports cars. What began in 1927 as a type S, ended two years later in the legendary model designation SSK, SSK stands for (Super Sport, Short). The modification consisted primarily of a shortening of a type S chassis to a wheelbase of 2950 millimetres. The short chassis was then paired with a new 7.1-litre supercharged engine. Famous German racing-driver Klaus Ludwig drove a Mercedes-Benz SSK at this event. Besides these wonderful Mercedes-Benz cars there were other famous cars like Blower Bentleys, Bugattis, Alvis, Riley, HRG etc.


Big Bangers, small grid
A disappoinment was the Canadian-American Challenge Cup (CanAm) as just nine cars competed. So a very small grid of which just for four cars had an V8 engine installed. Both heats were won by Italian Michele Liguori in a 1973 Lola T292 with a Cosworth-Formula 1 3.0 litre engine. It will be interesting to see this Lola competing in its next race with more entrants as it was incredibably fast and I doubt if any of the famous big bangers would be able to outperform it.


Motorcycles and Sidecars
Motorcycle-races are always part of this event and who can resist the sound of a Norton Manx or an Italian Ducati ? Watching the sidecars taking sharp corners is always spectacular as the passenger struggles to keep the sidewheel on the tarmac. As expected in their home-country, the so-called BMW-Kneelers were well represented. The most unusual sidecar was the Komnik sidecar installed with a Mini Cooper 1000 engine.