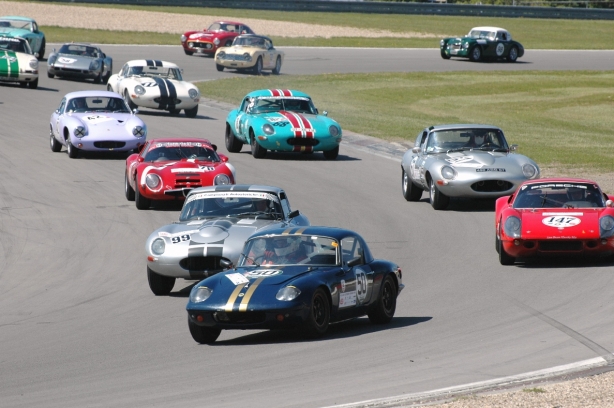 Photo by Guus Docen
The conditions for the 40th Anniversary of the Oldtimer-GP couldn’t be better, three days of sunshine ! So 50,000 visitors enjoyed themselves around the Grand Prix track and the old original Nordschleife circuit. During the previous years the 4-hour race was held on the combined Nordschleife and Grand-Prix circuit but this year the organisation decided to run the 4-hour race using only the old track.
AvD 4-hour Marathon
Some regular visitors complained about a lack of entries for the combined races (4-hour Historic Marathon race, the Touring Car Cup and the Nürburgring Trophy) on the Nordschleife and they were right as there were just 80 cars on the grid. Was there an explanation for the reduced number of entries ? Was it the bad weather conditions from the previous years, or the current economic climate ? Journalists and photographers discussed all the possible reasons and the most plausible explanation for the smaller grids was the increasing number of events like the Oldtimer Grand Prix (the recent Le Mans Classic and Silverstone classic and the forthcoming Goodwood Revival). The 4-hour race at the Nordschleife however, remains a very special event, 20.8 kilometres in length, 40 left-hand bends, 50 right-hand bends and a 300m height difference with extreme slopes and gradients ensure a significant adrenaline kick for both drivers and spectators. During morning practice last year winners Marcus von Oeynhausen and Frank Stippler got into trouble as the gearbox of their lightweight E-Type Jaguar broke down. The Gotcha team was able to replace the gearbox within 90 minutes so they were able to make a few practice rounds resulting in pole position for the 320 BHP turquoise coloured car.
Of the 38 4-hour Marathon starters only 27 completed the full distance. The main reasons for this high number of non-finishers were overheated engines and gearboxes because of the high temperatures. The Gotcha-Jaguar didn’t suffer from the hot conditions like many other cars and after three-and-a-half hours and 24 laps of racing Oeynhausen-Stippler finished 5.34 seconds ahead of the Walter Rohrl/Arim Zumtobel Porsche 911. Allen Tice and Chris Conway passed the finish line in third in their Marcos 1800 GT.

Lurani Trophy
The Lurani Trophy for Formula Junior cars is always nice to watch because of the fearsome battles taking place not only at the front but also in the middle of the field. Fastest in practice was Michael Hibberd in a Lotus 27 followed by Phillips Buhofer in a Lola Mk V A. Third and fourth in practice were Christoph Burckhardt (Lotus 22)  and Piero Tonetti (Brabham BT60). The first race on Saturday was won by Piero Tonetti followed by Burckhardt. On Sunday it was again Piero Tonetti but in his slipstream was Michael Hibberd’s Lotus 27. This season two Australian drivers are also taking part in this Trophy, Don Thallon (Ford MRC22) and Kim Shearn (Lotus 20/22), they finished in12th and 14th place respectively.


Historic Grand Prix Cars pre-61
On the front of the starting grid  were two Lotus 16 driven by Joaquim Folch and Philips Walker.
The first race on Saturday was won by Walker and Folch finished second  but on Sunday Folch retired and Miles Griffiths (Cooper T45) finished 1st ahead of Walker with Julian Bronson's Scarab 3rd.

Two-seater Sportscars and GTs pre 1960/61
Another highlight of the weekend, was the one-hour race for pre 1960/61 two-seater GT cars, starting Saturday-evening at eight o’clock. Traditionally this race is started in true Le Mans style, so 41 drivers were sprinting across the track, although some of the older drivers received some dispensation and walked a shorter distance. Some extraordinary cars were entered like Porsches 550 A, a very rare Porsche 356 Carrera Abarth, Maseratis T61 Birdcage, Maserati 300 S and Jaguar C-Types. Some well-known drivers in the historic racing-scene were present like Julian Mazjub, John Harper, Simon Ham, Richard Attwood, Frank Stippler and Burkhard von Schenk to name a few. This 1-hour race was won by the equippe Balz/Stippler in a Maserati T61 Birdcage. Second was Julian Mazjub in the rare Sadler Mk III.  Third were Philip Walker and John Harper in the nimble Lotus Eleven Le Mans. A 30-minute race for this series was held on Sunday, Julian Mazjub won this race followed by Philip Walker in the tiny Lotus Eleven. Third was Adrian Kraft and Max Werner in a Maserati T61 Birdcage as Simon Ham lost a probable 2nd place when the Lister's gear lever broke off leaving the car in 3rd gear.

Masters GT pre 1966
An impressive number of cars were present at the Nürburgring to score points for the Masters GT championship. The races in this series are held over 50 minutes with an obligatory pitstop for a driver change and refuelling. During practice Sandy Watson was 0.105 seconds faster than Sean McInerney in the 4.7 Litre TVR Griffith. Third in practice was Marcus von Oeyenhausen in the turquoise E-Type (entered in three races this weekend !). Fourth was Rob Hall, who was so unfortunate to go off-track when the Cobra’s right front-suspension broke. Saturday-afternoon Sean McInerney showed his driving skills in the family-Griffith as he dominated the whole race and finished first 18 seconds ahead of the repaired AC Cobra driven by father and son Rob and Nick Hall. Just like Sean McInerney  Marcus von Oeyenhausen opted to drive solo and took his E-type into third place. Sandy Watson in a similar car (shared with Martin O’Connell) took fourth place.

E-Type Challenge
Alex Buncombe qualified on pole for the first of the weekend’s E-Type Challenge races and the J.D. Classics team wasn’t disappointed as Alex drove a brilliant race and led the 20 strong grid of E-Types from start to finish, taking the chequered flag. The victory in the first race meant that Alex could start once again from pole position in race 2. However just after the start before the sharp right hander three cars collided into each other as Martin O'Connell’s brakes locked and he ran into the rear of Buncombe’s car and spun him round. Also von Oeynhausen's car was hit and suffered damage to the right side. Despite the collision both Alex and von Oeynhausen were able to drive away from the spot resulting in a win for Buncombe followed by von Oeynhausen  after 4 seconds.

Touring Car Trophy for Tourings Cars and GTs
This year the organisation decided to combine the races for  touring cars and GT cars. A bit confusing to see Lotus-Cortinas, Ferrari 250 SWBs,AC Cobras and Ford Galaxies in one race. Saturday-morning began with the race for Touring Cars and GTs under 1600 cc. Lotus Elans dominated this race and claimed the first four places. On saturday-afternoon the race for cars over 2000 cc. was won with ease by Bill Sheppard in the Shelby Cobra. Second was Swede Lars Esselius in a Ford Falcon.
On sunday-afternoon was the final race for the 35 fastest cars of both races. Surprisingly this race was won by Lars Esselius as Bill Sheppard (who dominated the race) received a 30 seconds penalty for crossing the white line at the pit lane exit.

The Oldtimer Grand Prix is the major historic race-event in Germany and its 40th Anniversary was worthwhile visiting despite a certain lack of entries in the Historic Marathon. There’s no doubt that the visitors of this year’s event will be looking forward to the 41th edition next year.