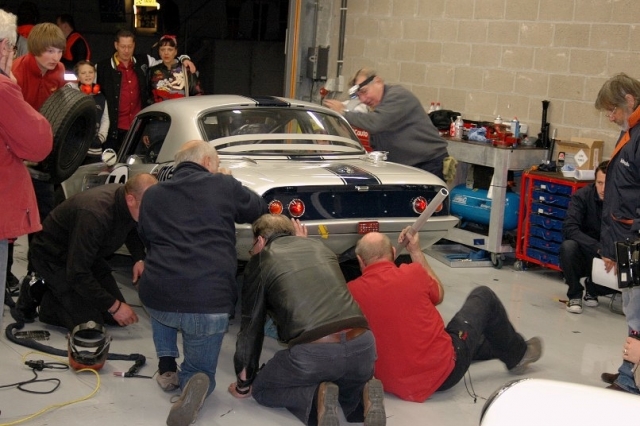 After a damp Goodwood Revival weekend before the Six Hours meeting and the memories of a very wet Six Hours weekend in 2010, I was relieved that everyone driving off to Spa-Francorchamps was treated to a totally sunny autumn weekend. It’s still hard to understand why one of the most important classic race events on the European mainland doesn’t attract more visitors. Compared to the number of people visiting Goodwood it must be a bit frustrating for the organisers as the fields of all the races are filled with an impressive number of highly interesting and well prepared cars.
Six Hours race
More than 100 cars filled the grid for the main Six Hour race. Qualifying on friday evening saw five Ford GT40’s battling it out for pole position. Roger Wills and Joe Twyman claimed the best position on the grid with a time of 2:44.126, followed by Leo Voyazides and Simon Hadfield in the nr. 8 GT40. Christian Gläsel and Ralf Kelleners were third on the grid in the nr. 3 GT40. Winners of the 2010 running, the Minshaw brothers and Martin Stretton, claimed 13th place on the grid in their semi-lightweight Jaguar E-Type. During the start of the race, the five GT40s at the head of the field quickly ran off into the distance but halfway through the race technical problems began to occur. The pole-sitting Wills/Twyman GT40 dropped away while the red Voyazides/Hadfield car and the black Gläsel/Kelleners machine had long pit stops so they dropped back in the field. That left the olivegreen TVR driven by Shipman/Hales/Reuben in a brief but unexpected lead. Thirty minutes after the start several cars crashed in Les Combes, including the ‘Jag’ of Jon Minshaw. A big accident occured when Michael Schryver in his Lotus Elan wanted to overtake a white Alfa Giulia Ti Super into Eau Rouge with a considerable speed difference. The Alfa-driver failed to see the Elan in his backview mirror and Michael suddenly realised the door was closing and hit the brakes hard and spun off to the left. He was lucky not to hit anything and restarted virtually immediately. The Alfa was less lucky and spun at high speed and rolled over a couple of times (watch the U-Tube clip). The Swiss driver was rescued without any injuries. The two remaining GT40s fought themselves back into the lead and soon they were chasing the little Griffith. The Germans Gläsel and Kelleners won relatively easily with a half lap to spare from Voyazides and Hadfield.

Historic Grand Prix Cars
Alasdair McCaig qualified the Cooper T53 on pole position for the first race on Saturday. Alasdair topped the timesheets after practice with a stonking 2m44.838s (152.965kph) lap. Peter Horsman (Tasman Lotus 18/21) joined him on the front row for Saturday’s race, having lapped at just over a second slower, while the rest of the 45-- car field was over the 2m50s mark. Last year’s double winner Roger Wills (F1 Cooper T51) and John Harper (Intercontinental Formula Brabham BT4) sat on the second rank. Both races were won by Alasdair McCaig followed by Peter Horsman. A bit disappointing was Dutchman Jan Biekens who finished 33th in the race on Saturday and 29th on Sunday in his beautiful yellow sharknose type 156 Ferrari. It’s a recreation
of the 156 chassis # 0002 driven by the Belgians Olivier Gendebien and Willy Mairesse in respectively the Belgian Grand Prix of 1961 and 1962. The car which was painted yellow in the Belgian team colours finished fourth at Spa in 1961 after leading some rounds before the other Ferrari's which were equipped with the more powerful 120° engines. In the 1962 Belgian Grand Prix,Willy Mairesse qualified fifth during practice. During the race Mairesse and the Lotus of Trevor Taylor dueled for more than an hour, passing and repassing each other a number of times during each lap but in the long, sweeping, left-hand Blanchimont turn both cars came together at more than 100 miles per hour. Mairesse car went off to the left, careering into a hillside behind a ditch, and catching fire after flipping over. He was thrown out of his Ferrari and his shoes and the legs of his trousers were torn off. He was conscious, despite numerous scrapes, cuts, and burns. Mairesse was loaded into an ambulance and transported to a hospital, where he was reported to be without any serious injuries. It was the end of chassis # 0002. After injuries at the 1968 24 Hours of Le Mans which forced an end to his career, Mairesse (born the 1st of October 1928), committed suicide in a hotel room in September 1969. He participated in 13 World Championship Grands Prix, debuting on 19 June 1960. He achieved 1 podium-place, and scored a total of 7 championship points.

Stirling Moss Trophy
Sports cars built before 1960 filled the grid for the Stirling Moss Trophy. Cars such as the Lotus XI, Lotus 15, Cooper Bobtail, Cooper Monaco, Jaguar D-Type, Lister Chevrolet, Lister Jaguar Costin and Lister Jaguar Knobbly could be seen in this one hour race. While the Lotus 15 of Roger Wills and Joe Twyman led the field for the vast majority of this one-hour race, a spectacular drive by Bobby Verdon-Roe in the Ferrari 246S Dino steadily hauled in the Lotus until, in the final few laps, the Ferrari dodged past to cross the line in first place. A disappointing Sunday-afternoon for Jon Minshaw and Martin Stretton as their Lister-Jaguar looked set to scoop second place, only to be struck by a differential problem two laps from the end, leading to a reluctant withdrawal.

Royal Woodcote Trophy
Saturday’s Royal Woodcote Trophy race was won from pole by the white D-type of Carlos Monteverde and Gary Pearson, although the early laps suggested the outcome would be very different. From the start, an exciting battle between Monteverde and Simon Hadfield (in Irvine Laidlaw’s Ecurie Ecosse D-type) lasted just a few laps as Hadfield’s D-type suffered a puncture, which put him out of the race. Another D-type inherited second place, driven by owner Gary Pearson. At the pit stop, Pearson handed his D-type to co-driver Andrew Smith and jumped into Monteverde’s D-type to finish – and win – the race, three and a half seconds ahead of his own car. Meaning Gary came both first and second, in two different D-types

Top Hat Masters All Series
A whopping 78 cars qualified for the Top Hat touring car and GT grid, headed by French veteran racer Claude Boissy in his Ford Escort, chased by the Porsche 911 RSR of Mark Bates, while John Bussell hauled Ian McCallum’s Aston Martin DB5 to third quickest. Other highlights in the entry include Roger Wills and J.Twyman in a Mercury Comet Cyclone, Bert Smeets in the ex-TWR Rover Vitesse and a tiny Renault 4CV for John Arnold! Mark Bates won the race. The difference between number two Ian McCallum and John Bussell in their Aston Martin DB5 was no less than two minutes! Leo Voyazides and Simon Hadfield finished third in their Ford Falcon Sprint. Claude Boissy finished fourth although his car ran out of petrol on the last lap.

Historic Motor Racing News U2TC
In the U2TC championship for touring cars under 2 litres there were just four models of touring cars competing with each other: Ford Lotus Cortina, Alfa Romeo 1600 GTA, BMW 1800 TiSa and Mini Cooper S. All cars in this championship are prepared to a very high standard and driven by the most experienced drivers like Jacky Oliver, Simon Hadfield, Oliver Bryan and Bill Wykeham. In the race at Spa it was Leo Voyazides sharing his Lotus Cortina with Simon Hadfield which had a very strong competitor in Jackie Oliver and Richard Shaw (BMW 1800 TiSA). In a very exciting race the former pair claimed victory, as the BMW drivers took second place. Jason Wright and Michael Gans finished third in their Alfa Romeo 1600 GTA. The fastest Mini Cooper S was driven by New Zealander Roger Wills and Englishman Joe Twyman as they placed their Mini Cooper in 11th position.

Masters Sports-Cars
Fifty-six sportscars took to the track for the qualifying session. British youngster Oliver Bryant in a Lola T70 Mk3B, was just four-tenths quicker than the similar car of Leo Voyazides/Simon Hadfield, while Dutchman David Hart’s T70 was timed as third on the starting grid. During the race these T70 Lola’s were chasing each other but again Oliver Bryant showed his excellent racing skills as he finished thirty-five seconds in front of Dutchman Hart. Leo Voyazides and Simon Hadfield had to settle for third place in their T70.

Pre-63 GT Race
A small grid of just 27 cars started in the Pre-66 Gentlemen Drivers GT race which was dominated by the 1962 Ferrari 330 GTO of Swiss driver Carlo Vögele and Briton Willie Green. They finished just 5 seconds in front of the AC Cobra driven by Martin Hunt and P. Blakeny-Edwards. This sunny weekend showcased the spectacular 4‐mile track and its forested Ardennes setting at its glorious best. It's to be congratulated that an organiser has the courage to start a race with one hundred and nine cars like the six hours race. The risk levels are considerable regarding the speed differentials and driver skills. But despite some cars were badly damaged is was a superb six hours race to watch. With an entry fee of just 25 euros it was cheap terrific weekend.