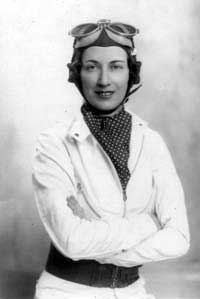 I have made little mention of ‘Les pur-sang des Femme.’ They were plentiful enough on race days amongst the spectator crowds, but on the track amongst the noise, oil fumes and turmoil, they were relatively scarce in those days. But the fair ladies who actually did contribute to the sport with their participation as drivers, mechanics or pit assistants were very special indeed. The days of Mini Grenfell’s black dresses and voluminous bloomers were far gone and young ladies who had become addicted to fast motoring, wore well fitting overalls in appropriately feminine style. They could handle the most daunting of cars, from the massive ‘specials,’ such as the Banarto and Pacey Hassons, the Leyland Thomas and many more down to the aggressive little speedsters like the supercharged Austin 7s; all with that sensitive touch of finesse which is required to keep such thoroughbreds on the track at maximum speed and without ‘blowing them up.’

Among the most noteworthy of these girls was the rather diminutive and very attractive Kay Petre, who virtually got away with the idea that ‘anything you can do I can do better’ syndrome, and in consequence built up a list of successes and records at Brooklands, Shelsley Walsh and continental events, a mile long. There were other significant women drivers such as the two Gwenda’s, Stewart and Hawkes, Margaret Allen, Dorothy Stanley Turner, Elsie (Bill) Wisdom, Doreen Evans, Sheila Darbyshire, Margaret Jennings, plus my Australian friend Joan Richmond, who did as much as any girl to uphold the prestige of women racing drivers. Elsie Wisdom tells a little joke about a young female driver, who when asked by a reporter for a woman’s magazine, what was her favorite perfume, replied “Castrol R.” (For the uninitiated to motor racing, Castrol R was the prime lubricant for racing engines and consisted of castor oil, and smelt like it!)

It was in 1932 that the Brooklands Automobile Racing Club (B.A.R.C.) opened their eyes wide enough to recognize the skills and competitive spirit of women motoring enthusiasts, and thus admit them as competitors in ordinary open races at the track. Immediately a young Australian girl, Joan Richmond together with Elsie Wisdom, drove a Riley into first place in the Junior Car Club (J.C.C.) 1.000 mile race. Thereafter in a very short span of time women drivers became a large part of the pleasure in watching motor racing at Brooklands and elsewhere. By 1933 Joan had purchased the ex’ Malcom Campbell 1921 3-litre G.P. Ballot racer in which she demonstrated considerable skill but without significant success. The design of racing cars at this period was advancing fast and the Ballot was considered outdated to the extent that the Brooklands committee was not keen on competitors using such outdated cars and considered them dangerous. In 1934 Joan did achieve a ‘fastest lap’ in one event and towards the end of the year after lapping the outer circuit at over 103 mph, the Ballot ‘threw’ a conrod and holed its crankcase. In 1935 the Ballot was sold and Joan reverted to a supercharged Triumph and took a placing in the J.C.C. July relay event. In October of that year Joan gained a second place in the Ladies 5-lap ‘Mountain’ circuit handicap race; this time driving a Frazer Nash and she was only beaten in the final finishing straight by a much faster supercharged Alta. Anybody having driven the ‘Mountain’ circuit at speeds approaching 80 mph, will know that it takes a fair amount of adrenaline to keep the foot down where it belongs!

Also in 1935, Joan attempted her first Le Mans race sharing the driving of a MG P-type with the experienced Mrs Gordon Simpson. They achieved a 24th placing with a trouble free run which at Le Mans is to the great credit of the car and driver. Early in 1936, she drove in the famous Monte Carlo rally which tested her skills with the Triumph car. In June 1936, during the J.C.C. Members Day, Joan was doing battle with her supercharged Triumph. The supercharger part having had its chain disconnected, the scrutineers placed her in the unsupercharged class with little change to the cars performance. However later in the day William Boddy told me that he had seen Joan working ‘apparently’ on the supercharger mounting in preparation to being taken out to the starting line. Could it have been that she surreptitiously restored the drive chain?

1936 had been a good year for Joan and there followed her participation in the London to Cardiff Rally, plus the Scottish Rally, the R.A.C. Rally in which she won the Ladies Open class, the M.C.C. Lands-End Trial as well the 1936 Monte Carlo Rally. 1937 found Joan again at Brooklands when I saw her driving an H.R.G. on the recently opened Campbell Road Circuit. But stiff opposition from much faster cars such as a 6C Maserati and the Bentleys, and leading drivers like Arthur Dobson and Reg Parnell, excluded her from gaining a place. But this is only a fraction of the story of Joan’s motor sporting career which included hill climbs and other speed events. From her early exploits in Australia competing in a small Citroen, then in her 1100cc Riley 9 at the Aspendale track Victoria, and a fifth place in the 1931 Australian Grand Prix at Phillip Island. Her many adventures with six friends, driving three Rileys overland from Australia through Asia and the Middle East to Palermo in Sicily for the start of the 1931 Monte Carlo Rally.

I recall being at the Grand Hotel, Harrogate, at the start of the Yorkshire component of the 1936 Monte Carlo Rally. I wished her luck and waved her off feeling very sad that I could not join the throng of competitors. After this period I lost track of Joan’s exploits and understand that she worked for De Havilland’s during the war as a procurer of materials for production, and had returned to Australia after the war ended. When I migrated to Australia 1948, I new Joan lived in Melbourne and through contacts in the motor racing fraternity was given an address in Beaumaris where she worked with the family business of Benson and Shaw boats. She could no longer afford to indulge in her passion for motor racing and instead satisfied her competitive nature by racing the tiny ‘Sabot’ yachts which were manufactured by her employers. Although they were small and simple cat-rigged boats, they were very popular because they made post-war sailing affordable and required considerable skill. They were open boats and if you capsized you had to be rescued which was quite a common experience on the choppy waters of Port Phillip bay especially when a cold front came through. Some years later when I was writing these memoirs at our property in East Gippsland in 1993, I contacted Joan for her assistance in writing the ‘Brooklands’ motor racing section, my friend Bill Jamieson arranged a meeting at his home in Melbourne and a wonderful day was spent in her company reminiscing about our youth. Although she was now in her late eighties, her mind was still razor sharp and her recall of incidents all those years ago was amazing.