Memories of the ‘Brooklands’ Racing Scene in the 30s (continued)

Scrutineering took place in the paddock area behind the pits, to insure that the car was in a safe mechanical condition and complied with any local regulations for the event. Scrutineers were experienced people with good mechanical knowledge and a fair judge of the capability of the competitor. With a ‘known’ car, one which has appeared at many meetings without creating any problems or a danger to others, or a relatively new machine of recognized quality such as Aston Martin, Lagonda, Bentley, Sunbeam, Riley, Squire and so forth, scrutineering was a straight forward inspection of tyres, slack in the steering, suspension and wheel hubs. The engine was inspected for any possible cause of fire in the way of fuel or oil leaks, plus properly wired ignition and electrical systems. Much attention was paid to additions and modifications, and it was a great help if the car being inspected was known to have been prepared or maintained by a respected mechanic. In my case I only had to mention the name of Granville Grenfell, and the scrutineer would give the thumbs up with no more than a mandatory inspection. But my friends who had ‘specials’ like John Bolster, Joe Fry, Basil Davenport, Freddie Dixon, all brilliant mechanics, were given a very sharp eyed inspection.

As might be expected of the world’s most famous motor racing complex of pre-war days, everything was managed to perfection, the track management, timekeeping, scrutineering, catering and public expediences, all were operated and maintained under the vigilance of the secretary Desmond Scannell. The vast central area surrounded by the track, apart from the airfield and Aero Club plus the huge Hawker aircraft works, contained specialist workshops to cater for almost every make of car and particularly racing machinery. If one required facilities to rebuild or tune a Bentley or other large car or competition ‘special’ one went to Thompson and Taylor. Tyre and wheel problems were the perogative of ‘Dunlop Mac’. Carburetors, spark plugs, magnetos, oils and fuel were all catered for individually in sheds of various sizes inside the Byfleet end of the huge conglomerate.

One felt hemmed in by interesting and noteworthy people, all a little tense as they tried to concentrate on their own problems and responsibilities, and it would never do to get in the way of Earl Howe, Sir Malcolm Campbell, Prince Birabongse, Raymond Mays, Oliver Bertram, Capt. Eyston and such distinguished personalities whose investment in any one of their racing machines would be more than I would earn in one year. In those pre-war years the racing fraternity at Brooklands consisted almost entirely of gentlemen, who would never hesitate to offer a hand if you were seen to be involved in some problem with your car. But all that seemed to change after the war for there was no more ‘Brooklands’ and the people you encountered at remaining motor sports meetings were of a different breed.

R.G.J. Nash of the Frazer-Nash car fame, kindly sponsored my membership of the B.A.R.C. (Brooklands Automobile Racing Club), he maintained what he called his Horseless Carriage Museum, in which one found specimens of many early racing machines. I recall a 1907 Peugeot racer, a 1900 Daimler, an ancient Fiat, a Napier of immense proportions and naturally one or two G.N. cars. Nash was an extraordinary likeable personality, the brother of Capt. Archie Frazer Nash, the creator of the renowned Frazer-Nash cars which first appeared around 1925. I used to spend a long time talking with R.G.J. about cars, music and literature whilst enjoying a ‘brew up’, and then we would adjourn nearby to the establishment of J. Granville Grenfell, who with his wife Mini ran a design and automobile workshop. A place overcrowded with cars, tools and parts, Lancias, Lagondas, Frazer- Nashes, my own Bentley and Aston Martin. Superchargers seemed to be Granville’s speciality and was spending a great deal of time supercharging one of the new Lagonda ‘Rapier’ models. Here at midday while partaking of bowls of Mini’s sustaining soup, the shed became even more crowded with interesting personalities from around the area, conversations ranged from Mozart or Benny Goodman to acceptable vane clearances in Rootes superchargers, fuel mixtures, road-holding characteristics and so forth.

You might be forgiven for thinking that no work was done by the Brooklands fraternity, but there reigned an atmosphere of friendly enthusiasm. Whatever the job it had to be done to perfection, and after a break for serious or ribald talk the work continued until midnight or exhaustion set in, or the job was finished. I recall helping Grenfell to put an engine back in an ERA owned by Arthur Dobson at between one and two o’clock in the morning. He never seemed to employ anybody, everything was done in an atmosphere of enthusiastic comradeship.

I was grateful for becoming a friend of Grenfell’s, and all the time I was at Brooklands which extended up to three seasons, their worshop was my headquarters where my cars and I were always welcome. Apart from the cost of some materials, no money ever changed hands nor was any account given for the many hours spent working on one or the other cars. These included the Aston Martin, a 3-litre and 4.1/2-litre Bentley, a front wheel drive Alvis and my 8th Series Lancia Lambda, but not all at the same time. Grenfell was particularly interested in the Aston which he considered to be aesthetically perfect in design, although rather too heavy and slow, consequently useless on the outer circuit track and little better for sprint and hill-climbs, without considerable modification, but he said it was perfect for long distance road racing. Nevertheless he would tune the twin SU carburetors and timing to perfection, then with his stop watch check my lap times which varied between 77.2 and 79.0mph. Somewhat disappointing I thought when the speedometer was peaking at 108mph on Railway Straight. We were using a fuel mixture of 10 parts Discol plus 3 parts Benzol to suit the high compression ratio of 9.5 to 1 with Champion R2 plugs. 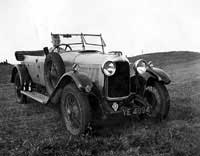