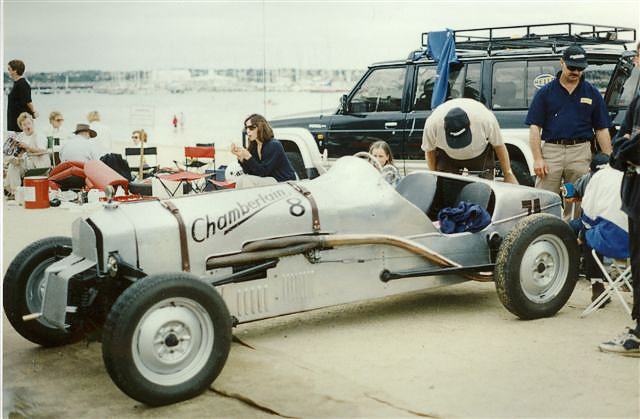 Page - 10 Chamberlain John Hazelden
The Chamberlain brothers were the first to design, build and race an Australian racing car. Built in 1929, this machine with its spaceframe design and 2-stroke 1 litre engine, probably has the longest development and racing career of any race car. Now owned by John Hazelden it is still exercised at special events and is slowly being un-restored back to its heyday of 1948.

Below: The Chamberlain Special at the Geelong Speed Trials

Long before this though, Chamberlain Industries had played a major role in the Australian automobile and manufacturing history. Their father was the founder of the Australian Ball Bearing Company. Their uncle Harry Hawker was the noted aviator and designer of the Sopwith Camel.

With a pedigree like this it was natural a young Alan (Bob) Chamberlain should enlist the help of his mate Eric Price to build a racing car “to take on the world”.  Arguably Australia’s most unique race car Bob started with a blank sheet of paper and designed the whole race car from scratch, unlike other Specials of the time that tended to cobble proprietary parts together to make their cars.

Started in 1928 it was Australia’s` first designed and built racing car with remarkable features unheard of in its day.  Known as the ‘Chamberlain Special it boasted such features as a triangulated space frame with independent front and rear suspension, front wheel drive, with Constant Velocity joints designed and built by Bob, with power by a remarkable Indian Powerplus engine with Norton barrels developed to the point of inconsistency.   The car was better suited to sprints and hill climbs and won its first race, a hillclimb, at Wheelers Hill in 1930.  It competed in three Australian Grand Prix events on the dust at Phillip Island in 1931, 32 and 33.

In 1934 the inconsistency of the motor hit home and Bob gave responsibility of the powerplant to his brother Howard (Bill) who in true Chamberlain tradition set out to build one from scratch.  Probably the most elaborate motor ever built, it was a one litre (1004 CC) two stroke with 4 cylinders and 8 pistons, two crankshafts and a rootes type supercharger.  It was instantly recognisable by its scream as it revved up to 7000 rpm. At a sedate 5800 rpm it developed over 80 bhp. (The 1949 Holden developed about 60 bhp).

Development of the motor was stalled by the Second World War and it took until a cousin of Bob’s, Jimmy Hawker built his own spark plugs and improved the electrical system that the Special really started to take off and become a race winning car.  Still ideally suited as a sprint and hill climb car, Jim won many events and was a popular performer especially at Rob Roy where the squeal of the motor and two stroke trail of exhaust smoke became legendary

It is interesting to note that with the Special safely entrusted to Bill, Bob started work on a mid-engined car designed for production purposes.  It had remarkable design features and bore more than a passing resemblance to the early Volkswagen.  The car a story in itself finally was finished by Jim Hawker with the help of his brother and still exists today.

1949 Jim concentrated on family and business and the car was effectively retired.  The fifty year anniversary of the Australian Grand Prix in March 1978 was to be a huge event and in 1973 Bob and Bill started preparing the Special for life as a Historic Racer.  It was to be more than just a simple restoration though and as is their nature they took the opportunity to make a few changes to increase performance.   These developments have continued and its career as a historic race car has been remarkable.  The death of the brothers during the 1990s saw the Special move to John Hazelden and the car has continued to be exercised for special historic events.  John is in fact attempting to restore the car back to the 1948 era when Jim Hawker stormed the hill climb and sprint circuits and was most successful.

John has documented the history of the Special from its creation by candlelight in the Mallee right up to the Year 2000 when it performed 3 faultless laps of the Australian Grand Prix track at Albert Park on the Sunday morning.  It is a remarkable story of the tenacity and perseverance of Australian engineers wanting to take on the world and win.  It chronicles many of the projects and career of Bob and Bill, including the Samson – World record holder Napier, the 1910 Prince Henry Benz’s and other projects.

For details on this book – contact John at:  This email address is being protected from spambots. You need JavaScript enabled to view it.