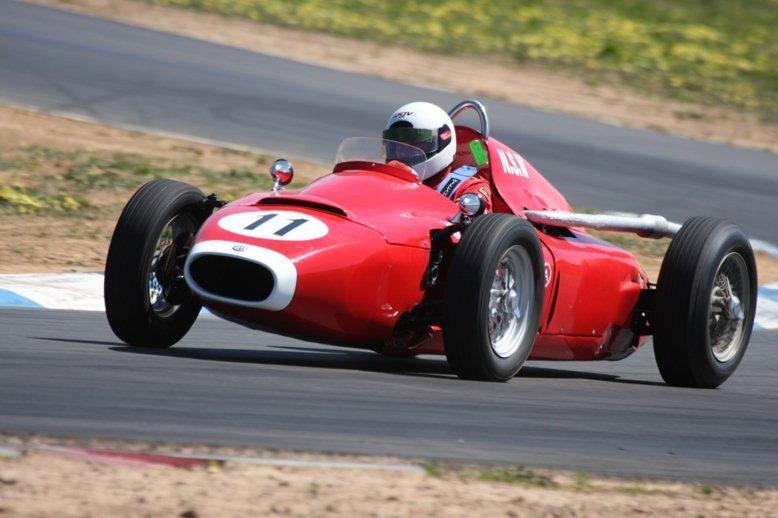 The Stewart MG was built by Gordon Stewart of Sydney and his helpers in the early 1950's to the order of chemist Mr Les Wheeler at considerable expense. It was noted for its revolutionary and advanced design with its highly modified MG TC engine located behind the driver and all independent suspension by Morris Minor torsion bars. Its sleek alloy body featured a cut down MG radiator shell on its long nose.   Its first competition appearance was at Mt Druitt in 1955 and it raced there and at Bathurst and Orange in 1955 / 56 in the hands of Les Wheeler. Frustrated by reliability problems and on advice from his bank manager Les handed the car over to Gordon Stewart who continued to develop it and race it. From 1957 to 1964 the Stewart MG was a regular competitor at NSW races and hillclimbs but because of the rapid pace of development of racing cars in that period, great success eluded it. Highlights however were clocking 142 mph at Bathurst in 1957 and lapping in 2.58.9 there in 1963 fastest ever by an MG Special, in all it appeared at Bathurst 14 times.   As several MG TC engines had been destroyed by 1957 an MGA engine was then fitted along with a huge Gordon Stewart built vane type supercharger and the car has continued to use this power plant ever since. Gordon moved to Coffs Harbour in 1965 and the car finally achieved some success there in local hillclimbs taking an FTD in 1971.   With the popularity of Historic racing in the late 1970's Les Wheeler again took over the car and attempted to run it at the 1979 Amaroo Historic meeting with Gordon Stewart driving but various problems prevented it from racing. Shortly afterwards Bernie Leimeister, then of Dapto, learnt that the car could be for sale and bought it with the intention of racing it, taking it with him when he moved to Queensland and later passing it to his son, Dean. However neither had even started the car but fortunately kept it intact and under cover but by 2007 it was really quite tatty and in need of a full strip down and rebuild.   Late in 2007 a saviour appeared when Dick Willis of Coffs Harbour became its next owner. Since then it has had full rebuild to its 1960 format and from Sept 2008 it has made several appearances at Historic meetings but true to its reputation, it has yet to display its full potential.
Tweet