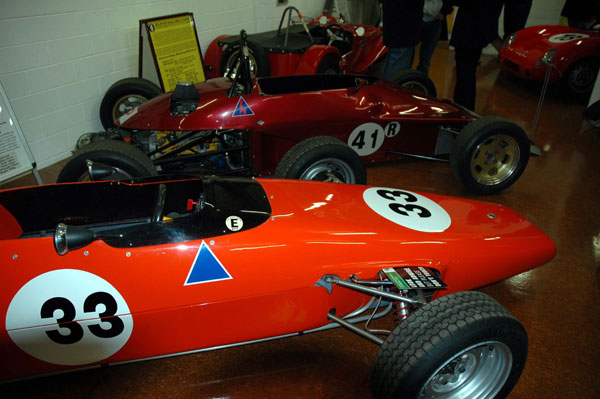 From Martin Stubbs
Elfin Sports and Racing Cars - Handcrafted for Race Quality Martin Stubbs attended the opening of the Elfin Heritage Centre on Thursday evening, August 23, 2007. Crowds of enthusiast turned up including Motormarques' benefactor,  John Hazelden, and family with his Cooper Austin on display at the entrance.
The Elfin Heritage Centre is dedicated to the memory and achievements of Garrie Cooper. The aims of the heritage centre are to commemorate and celebrate the heritage of the marque by providing a meeting point for a Elfin enthusiasts and assistance in keeping Elfin cars performing on tracks throughout the world. The quiet genius - Garrie Cooper. The Elfin name towers over Australian motor sport like few others, which is surprising given the quiet nature of its founder, Garrie Cooper. Never one for words, Cooper spoke through his deeds on the racetrack. The mighty successes of his racing cars, driven by himself and a legion of other talented drivers, spoke volumes for the man who built racing cars in a small Adelaide factory for more than 20 years. Because Cooper was born in Adelaide, South Australia, a world away from the hub of motorsport, he never received the recognition he certainly deserved. Had he been born in England, France or Italy there would probably have been an Elfin Grand Prix team, and Cooper would most likely have been lauded for his innovative racing car designs much as John Cooper and Colin Chapman were for their Cooper and Lotus cars that fundamentally changed racing car design. He wasn't. He was born in Australia so the world only got a glimpse of his genius. When the European teams and drivers came south for the northern winters to race against the best drivers and teams local motor racing could muster, Garrie Cooper was right up there, racing his V8 powered formula 5000 monsters, with great success against the best in the world. While Cooper enjoyed immense success at the wheel of his own cars, like the 1968 Singapore Grand Prix and the 1975 Australian Tourist Trophy, he also gave other great Australian drivers the chance to shine. Scan the list of drivers who have tasted success in Elfin racing cars and you'll find names like sports car legend Frank Matich, Goldstar champion John McCormack, Bathurst champions Larry Perkins and John Bowe, Le Mans 24 hour winner Vern Schuppan and Formula One champion James Hunt. While Cooper would undoubtedly have enjoyed watching these other great drivers win in his cars, he gave his all in racing with and against them, because what that's what he enjoyed most. Cooper built racing cars because he loved racing. It was something he dreamt of from a young age. That his company grew to become the second largest manufacturer of racing cars in the world in the late 1960s was testament to his engineering ability. From the early 1960s to the late 1970s Elfins dominated local open wheeler and sports car racing, from the diminutive Formula V to the sleek Formula Ford which helped a generation of young chargers get into racing, to the thundering V8 sports and racing cars that won numerous national titles. Along the way Cooper and his tiny team built 27 different models, a total of 248 cars. With an impressive list of 29 national championships and major titles they were all winners, much like the quietly spoken creator. Australian motor racing lost one of its stars when Garrie Cooper died suddenly aged just 46, in 1982. His spirit is looking over the shoulder of the designers of all subsequent Elfin models.
Tweet
Print Email
Rate this item
(0 votes)
Read 8089 times Last modified on Monday, 21 May 2012 17:14
« De Dion Bouton 1913 More in this category: EMW (Eisenacher Motoren Werk) »