The introduction of the J2 Allard to the Australian market was due entirely to the energy and enthusiasm of Rube Gardiner. In 1950 Gardiner traveled to the United Kingdom where he was appointed New South Wales distributor for The Allard Motor Company. Gardiner, through his Gardiner’s Motor Service at Stanmore Road, Petersham, in the inner western suburbs of Sydney, had been a supplier of Ford spare parts since 1935. After taking up the Allard distributorship, Gardiner acquired a new facility on the Princes Highway at Carlton in the Southern suburbs of Sydney.

All six J2’s exported to Australia by the factory were shipped to Gardiner’s. In a period of less than six months, from August 1950 to January 1951, five J2’s were dispatched. The sixth was a bodyless show car shipped during July 1951.
Today three remain in the country, two having been exported to the US and the show car  broken up. Although Rube Gardiner died in 1955, Gardiner’s continue to sell Ford parts at Carlton.

None of the interstate Allard importers, for example Brisbane Motors Pty Ltd, who at one point took delivery of a run of six prima coated P types, imported the J2.

There were no J2X’s exported to Australia by the factory.*

Rube Gardiner drove the first J2 imported directly to the October 1950 Bathurst race meeting. It was not raced there, but displayed to potential buyers. It was at this meeting that Stan Jones saw and bought the car. At the time the J2 was quickly building a winning reputation not only in the UK but particularly in the US.

Jack Murray, a well known Sydney racer and who was to win the 1953 Round Australia Redex Trial, also committed to buy a J2 from Gardiner.

Perhaps encouraged by this early sales success, Rube Gardiner imported a further three J2’s all of which he entered for the Easter 1951 Bathurst race meeting. Jones also entered his car as did Murray. So all of the J2’s in the country at this time, a total of five, were entered for this meeting.

As it transpired only three started. Nevertheless, this proved to be the high point of J2 racing activity in Australia. Never again were three J2’s to compete together in this country (perhaps until the 26/27th  February 2005 Philip Island meeting).

Overseas success by the J2 was almost all as a result of installing modified and highly tuned American-made overhead valve V8 motors, predominantly Cadillacs. In the US there was something of a sports car racing revival occurring, with the J2 at the forefront, there being virtually no open wheel road racing opportunities.

It is ironic that at this time in Australia the most significant road racing opportunities were of the open wheeled variety. Consequently, those who persevered with the J2 and who wanted to race regularly at the top level, were forced to compete against grand prix type cars.

With the exception of Jack Murray’s car, which ran a Cadillac motor, and one Gardiner car with an Ardun conversion installed and which was never raced, the remaining three J2’s which raced here, were imported with English made Ford Pilot side valve V8 motors.

In the hands of well known drivers Jack Murray, Tom Hawkes, Reg Hunt and Stan Jones, (the latter two being future Australian champions driving 250F Maserati’s), J2’s continued to be reasonably competitive, in both racing and sports car categories, until 1955.

In the early days, with highly modified motors, J2’s could compete successfully with the predominant sports car, the Jaguar XK 120. However, with the appearance in this category in the mid 50’s, of the more reliable and cost effective Austin Healy and Triumph TR2, the J2 was pushed well into the background.

Gardiner’s originally advertised the standard J2 (Pilot motor) for sale at AUP 1,460.00. To this figure had to be added the considerable cost of modifications necessary to make them competitive.  An almost new Austin Healy could be bought for well under AUP 1400.00, a used XK120 for under AUP 1200.00.

Curiously, and for reasons not totally clear, at least three of the J2’s imported by Rube Gardiner were actually on sold by Hastings Deering, then New South Wales biggest Ford dealer. Two being sold as new, although they had both been raced.
Perhaps being slow to sell, and given The Allard Motor Company’s close connection to the Ford Motor Company, Hastings Deering was asked to assist Gardiner’s in the sale of the cars.
Having initially advertised new J2’s at AUP 1,460.00, Gardiner finally advertised as new cars at a considerably reduced AUP 1,150.00
After importation, Gardiners/Hastings Deering had a wait of over three years before they were able to sell two of the cars to Hunt.

Gardiner’s expertise was in spare parts sales, not new vehicle retailing. In addition to the J2’s, he also imported at least two K2’s. The facility Rube Gardiner acquired in Carlton was suitable for use as a car showroom, where the  bodyless 1950 London Show car imported by Gardiner, would have been displayed. However with the decline in Allard sales, the showroom was not used, and the spare parts business was transferred from Petersham to Carlton where it thrives to this day.


*In 1995 Terry Healy and Quentin Young imported a 1952 J2X from the US. Believed to be ex Tiny Gould and Kirk White, it had been in pieces for some twenty four years and was in fire damaged condition. Originally silver, it has been repainted red and fitted with a 2 X 4 barrel 331 Chrysler Hemi and a four speed gearbox. This car was exported to Hong Kong and re-imported to Queensland. It is now owned in Victoria by David Rodd. 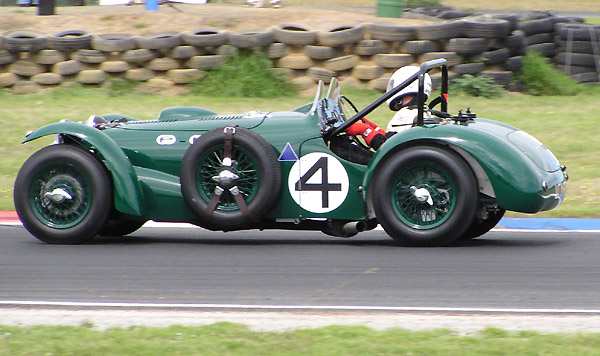 6-10-50             Chassis # 1781                 Engine #5339/27 Ford Pilot V8
Shipped to Gardiner’s Motor Service, Sydney.
Blue with Blue interior.
Entered by Rube Gardiner for the Easter 1951 Bathurst meeting with Harry Monday as driver. Monday started in two races at this meeting, setting fastest time in a twelve lap handicap event and being unplaced in a 6 lap over 1500cc handicap.
It was raced to a win by Rube Gardiner at Nowra, NSW in December 1952 and again to a win by Harry Monday at Orange, NSW in January 1953.
Advertised for sale by Gardiner’s in May/June 1953.
This is the second of two J2’s owned and raced by Melbourne based Reg Hunt who acquired it during 1954 at short notice directly from Hastings Deering in Sydney, ostensibly as a new vehicle.
The vehicle was repainted white and registered Vic GBC 836.
Hunt extensively modified the car, replacing the original Ford Pilot motor with a Ford Mercury incorporating Edelbrock heads and other speed equipment supplied by the Sydney based champion speedway racer Ray Revell. Revell, who was the Edelbrock distributor, also provided advice to Hunt on boring and stroking the motor and on converting it to alcohol fuel.
It was raced by Hunt until late 1955 despite being advertised for sale in May and June of 1955. A rule change prohibiting the use of cooler running alcohol fuel in sports cars prompted this sale.
The car was ultimately sold to Ralph Snodgrass who campaigned it until the late 50’s.
Jan 1970 Lawrence H Jackson, Sydney.  .
!980 J & D Auto Wholesalers Melbourne.
!980 J Blanden Adelaide, Ardun Ford Mercury.
Gavin Stanford-Morgan, Adelaide.
R Nicholls, SA.
H Welsh, Melbourne.
1984 Ian McDonald, Vic.
Sid Houlston.
Exported to the US by Geoff Dutton.
On sale at the Monterey Ca. USA sale in 1990.
Bob Pass, USA.
Current owner, Jimmy Dobbs, Tennessee, USA.


13-11-50      Chassis # 1782                    Engine #5307/61 Ford Pilot V8
Shipped to Gardiner’s Motor Service, Sydney.
Bugatti blue with blue interior
Entered by Rube Gardiner for the Easter 1951 Bathurst meeting with Jack Murray as driver. Murray ran third in an over 1500cc handicap and started but did not finish in the 26 lap Redex ‘100’.
(Jack Murray also entered his own Cadilac engined J2 #1698 for this meeting but did not run the car).
This is the first of two J2s owned and raced by Melbourne based Reg Hunt who acquired it new at short notice and again ostensibly as a new vehicle during the second half of 1953 directly from Hastings Deering in Sydney.
The vehicle was also repainted white and also registered Vic GBC 836.
As with J2 #1781, the Pilot motor was replaced by a similarly modified Ford Mercury.
The car was raced briefly by Hunt, at Fishermans Bend during October 1953 and to 10th place in the Australian Grand Prix held at Albert Park in November 1953.
It was then sold to Bill Craig, Adelaide S.A., who in turn immediately offered it for sale.
The car then passed through a number of hands including:-
D.L.Harrison, Adelaide (Collingwood October 1954).
John Hill Smith, SA.
Andy Brown, SA.
Adelaide motor trader Oliver Young (reg SA RCH 587) on a number of occasions. Michael Robinson. Repainted green.
Bought back in 1972 by Oliver Young, it was in the Young family for a total of some 35 years. Repainted silver.
In 1990 Quentin Young (Oliver’s son) and Terry Healy exported this car to the US.
It was advertised at a Christies Auction in California as left-hand drive, with quick change differential, an Ardun Mercury motor, and painted red with black interior.
Ash Marshall’s The Fine Car Company in San Diego Ca. USA.
This car remains in the US, Marshall last known owner.


18-1-51                    Chassis # 1699                   Engine #  2008X  Ardun Ford Mercury
Shipped to Gardiner’s Motor Service, Sydney.
Bugatti Blue.
This was third J2 entered by Rube Gardiner for the 1951 Easter Bathurst meeting with Ron Ewing as the nominated driver. The car was a non starter at
this meeting.
1953/54 owned by Peter Martin, Sydney, and used as a road car, registration NSW  ADV 784.
1955/56 NSW reg BTB 402.  John O’Brien Sydney, used as a road car.
14-8-61 Sold by Sydney sports car trader Leaton Motors to John Jackson, the Sydney based Allard enthusiast.
The Ardun motor was removed by Jackson and installed in his K2. The J2 was never raced during the thirty six years of Jackson family ownership and was in storage for most of this time.
The K2 was used sparingly until 1967 when it was garaged.
In 1991 the Ardun motor was removed from the K2 and reinstalled in the J2,
when restoration of the J2 commenced.
November 1996, the car was sold by Jackson family through Brooks Goodman to current owner, Philip Stanton, re registered NSW AH1 5IR.
Restoration continued until completed in 1999.


26-1-51             Chassis # 1698               Engine #  8M931
Shipped to Gardiner’s Motor Service, Sydney.
Red with red interior.
Factory records show this car was shipped with the above mentioned engine number.
Sold immediately to Jack Murray, Sydney.
This car was raced with a Cadillac motor which, it is understood, was installed by Murray in Sydney The Cadillac motor was subsequently given the number N57110P.
This car’s first Bathurst race was the October 1951 meeting (not the ’51 Easter meeting as has been reported elsewhere).
Raced  by Murray, who tended to confine his racing to the northern states, through to 1955, including to fourth place in the 1952 Australian Grand Prix held at Bathurst, and in the 1954 Australian Grand Prix at Southport Qld, where it did not finish.
During February 1957 the car was sold to John Firth, Sydney.
In John Firth’s latter years his brother Jim looked after the car. On John’s passing in 1992, Jim took over the car and in 1995 commenced a rebuild.
Jim Firth retains this low mileage J2 in Sydney where is it road registered AEN 62Z.


6-7-51                 Chassis # 2136                Engine # 2003  Ford V8
(note, shown in Tom Lush’s book as a P type, factory records definitely list this as a J2)
This was the 1950 London Motor Show car, with “cutout features” and black enamel and chrome chassis. It was displayed at the show without body and with an Ardun motor fitted.
Shipped to Gardiner’s Motor Service without body.
Displayed at Hastings Deering’s Camperdown, Sydney, showroom. ( the story goes that after being sold without authorisation, Hastings Deering senior management demanded it’s return).
Sold to a Largs Bay, Adelaide, SA resident where it was broken up.
Parts of this car were used in the restoration of the Jones/ Hawkes car (1731).
Further parts retained by Quentin Young. 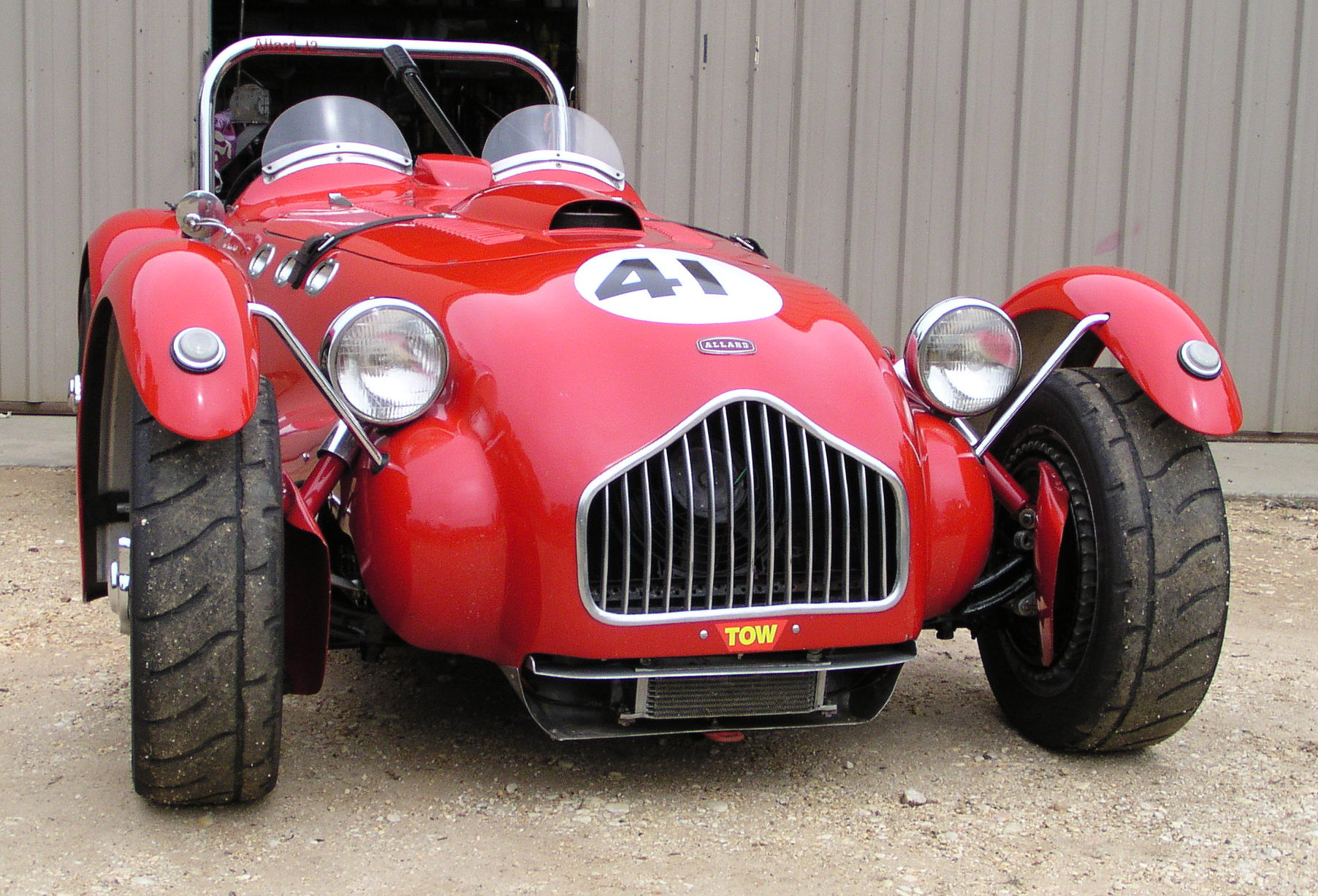