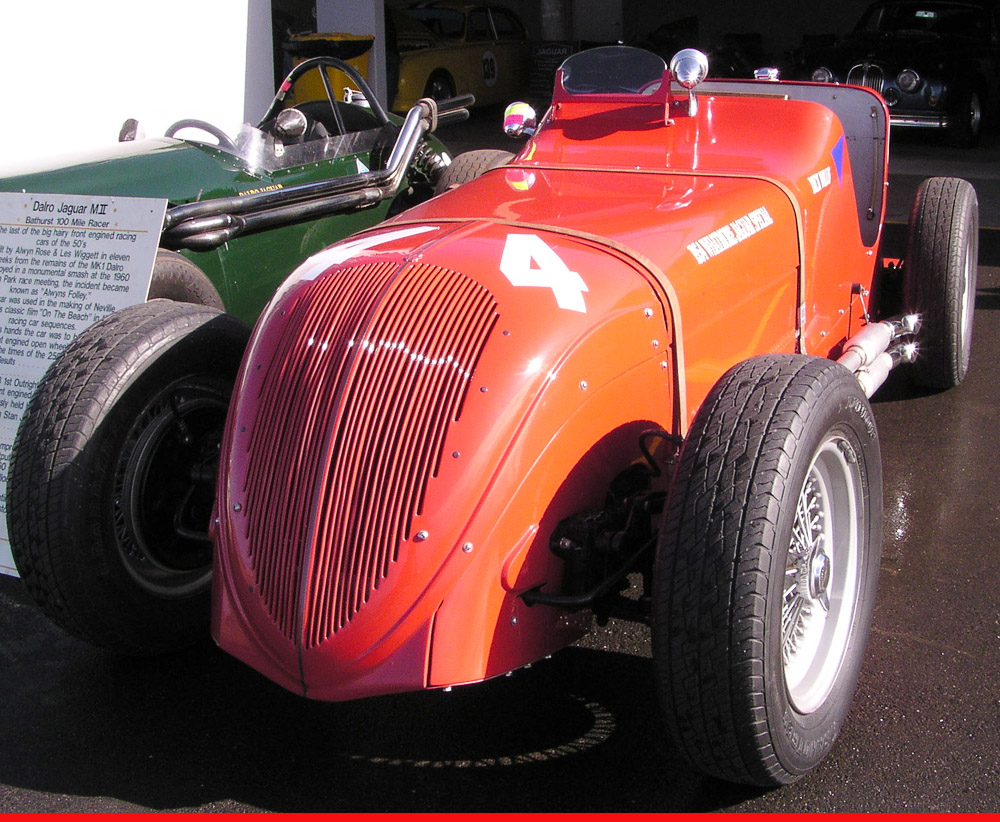 Charlie Whatmore made his road racing debut at Phillip Island in 1937 with a Ford V8 Special.
THE WHATMORE JAGUAR SPECIAL


Charlie Whatmore, born in 19 10, was a sports store owner in Brisbane with a penchant for motor racing, he made his road racing debut at Phillip Island in 1937 with a Ford V8 Special, also racing it at the inaugural Bathurst meeting, the 1938 AGP, and again at Bathurst in 1939 and 1940.

Post war, he raced a Midget Speedcar at Brisbane's Exhibition Ground and then, again turned his attention to road racing, with the midget now powered by a Studebaker Champion motor and modified for the circuits, Charlie again made the trip to Bathurst in 1950 and also ran the car on Queensland circuits and hills.

In the early 1950's construction was begun of a new car, a purpose built road racer, with which he hoped to be more competitive with the newer cars now appearing on the scene. Keeping his allegiance to Studebaker, it was powered by a specially imported V8 OHV Studebaker engine, the chassis was from a Standard 14 which featured independent front suspension and was underslung at the rear. With a Fiat Topolino front and a narrow two seat, pointed tail, alloy body the Studebaker Special, as it was then known, was a very attractive and purposeful looking racing car, making its debut at Lowood on June 9th, 1952. During 1952 and 1953 it was raced at Lowood, Strathpine and Leyburn and at Whites Hill and Ballards Hill with moderate success although 1st or 2nd FTD was usually achieved at the hill climbs. The 1954 AGP was to be held on a previously unused road circuit at Southport, Queensland, and in an effort to make his Special more competitive against the anticipated high quality field, a Jaguar Mk7 engine was obtained from the Distributors, Andersons Ltd., who were well known for Mrs Geordie Andersons Jaguar XK 120 Coupe, winner of the 1954 24 hour race at Mount Druitt, and later as owners of the D Type Jaguar, raced by Bill Pitt.

The engine, which reputedly came from a burnt out sedan, was modified by fitting 9:1 pistons, higher lift camshafts, twin 2" SU carburettors and, fitted with a long range fuel tank beside the driver it was ready for the GP.

The rough road played havoc with many competitors including the legendary Maybach, driven by Stan Jones, who was highly fancied to win, but a chassis breakage caused it to have a horrendous accident, breaking the car in half By lap 22 of 27 Charlie Whatmore was lying third and confident of a good result,  when overheating caused by a fractured radiator, relegated him to seventh at the finish.

The 1955 AGP was held at Port Wakefield, South Australia, and was to be the Jaguar Special's only excursion outside its home state, but again, it was to fall victim to a mechanical problem when a rear wheel broke near the end of the 80 lap race when it was running in sixth position, rejoining after a pit stop to fit a replacement, they finished in twelfth position.

The remainder of the Whatmore Jaguar's career was spent in Queensland, where it was usually well placed in events on local circuits, and came fourth in the 1955 Australian Hillclimb Championships at Prince Henry Drive, Toowoomba.

In November 1955, the car was advertised for sale for 1300 Pounds, but it seemed there were no takers, so Charlie continued to race the car until late 1956, however it was becoming obvious that time had caught up to the Whatmore Jaguar, with the new breed of small, light and nimble British cars such as the Cooper and Lotuses making the great Aussie Specials like Charlie's obsolete. Charlie's motor racing career then continued into the early sixties with a Lotus Eleven.

Eventually the Special found a new home, with Trevor Baltzer of Brisbane who bought it without the Jaguar engine, discarded the body, and proceeded to convert it to a sports car. Baltzer fitted a dry sumped Holden motor, a " Foster" fiberglass sports car body to the Whatmore Jag's running gear and raced it at Lakeside and Lowood in 1960/61 as a "Holden Special" until it was again temporarily laid to rest.

Rescued in 1977 by Tony Galletly of Brisbane who restored it and raced it as the Foster Holden in Queensland Historic events in 1978/80, in 1980 it was bought by Trevor Chappell of Tenterfield who scarcely used it, and then by Tony Hart of Tabulam, NSW, who raced it in Historic events in 1985/87.

Tony Beadman of Grafton, NSW, was the next owner in 1991, by this time, however the once proud racer had degenerated to a rather sad and neglected state, but Tony attempted to gather together sufficient parts to be able to commence a restoration to its Jaguar engined format, the most notable portion of the cars career, However, in May, 1999, he passed the project on to Dick Willis, of Coffs Harbour, who is proceeding with the restoration.

Completed in time for the 2000 Jaguar National Meeting in Sydney where it was on display at Fox Studios and competed at a Super Sprint at Eastern Creek, eliciting much favorable comment as the car had not been seen in this format for some 44 years and never before in New South Wales.  The standard of the restoration was also the subject of approval by those in attendance.  Later in the year 2000 the Special made a return to two of its previous happy hunting grounds when it completed at the Leyburn and Lowood Historic Sprint meetings.