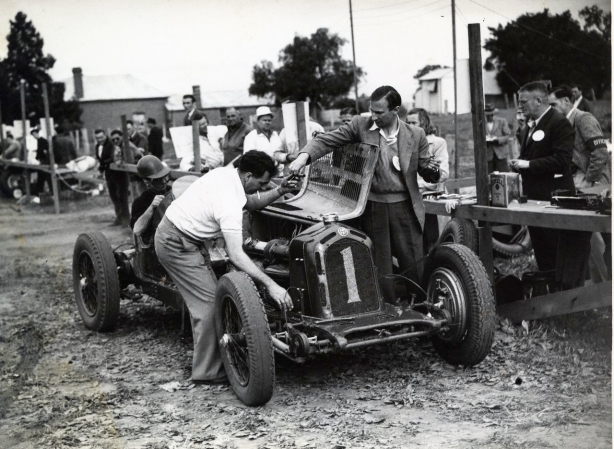 Alf Barrett was known as the maestro.  It was an appropriate nickname because of his achievements between and after world war two in a supercharged straight 8 Alfa Romeo 2300 Monza  at his favourite circuit - Mount Panorama at Bathurst New South Wales.

The dapper Barrett drove the thoroughbred Italian car with  world class finesse and  flair with exceptional physical and mental coordination and intense concentration that enabled him to control sliding the car at its absolute limits with a calm smooth flick-of-the-wrist precision.

Seeing the black-helmeted Barrett in action, sitting high in the cockpit, wearing his trademark dark blue short sleeved shirt was a never-to-be fortgotten treat. In an era of self funded amateurs who drove for token prize money, th e challenging 6.2 mile mount panorama circuit was the standard setter by which the best drivers were judged.

Barrett became the master in 1940 with an against-the-odds victory in the New South Wales Grand Prix.  The classic race was a handicap with Barrett starting from a scratch position Many of his rivals had already covered several laps before he started. He went on with a stunning performance  where he set a new outright lap record that made the King of the Mountain.  He had started last and finished first.

His passion for speed was inherited from his father - a motoring fanatic.

The children's playground in Armadale, Melbourne,  was an extensive garden with a winding track that was  ideal for bicycle races. Before long a variety of ingenious petrol-powered devices began to appear.

After serving in the RAAF Barrett generated excitement wherever he raced.  He continued to claim lap records at a host of circuits before quitting in 19 49 to devote more time to is young family.