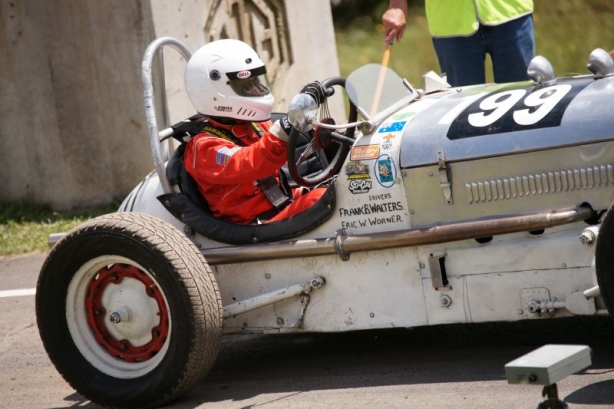 Mt Panorama - a long time ago.

Easter weekend 1949. Swarms of  motor cycle riders came up over the Blue Mountains and occupied the historical town of Bathurst, NSW. They began to arrive early in the afternoon - before the pubs shut at 6.00 pm. Their goal was Mount Panorama.

They couldn't get a drink, but they had no trouble getting a feed. Along the main streets, milk bars and  cafes were packed - long trestle tables were set up - the proprietors were serving an evening meal - no menu - take what you got. Sausage and egg,  pudding and tea or coffee. One fixed price. (about 2 shillings, as I recall) Customers had to sit wherever they could find a place. They paid as they came in, gulped their meal down, and pushed their way back out again to make room for the next customer.

When the motor cycle races were over, and the bikes had gone, the sports cars and racing cars arrived. From early Sunday morning, the shreik of their motors and the stench of scorched tyres filled the air. Easter Monday - about dawn - street sweepers cleaned up the mess at the end of Conrod straight where wild boys had crashed their cars during the night - after failing to take the left-hander down at the bottom of the hill.

A few racing cars from the period can still be seen. One wonderful survivor is the So-Cal Special, owned and driven  by  Graeme Raper. Graeme supplied much of the information about the So-Cal Special, Lance Porritt provided further valuable material, and Linda (nee) Walters has written the wonderful account of her father's experiernces with the car.

The S0-Cal Special was was written up in the "Sports Cars and Specials" magazine of November 1956 (Price 3 shillings)   The writer - John Bartlett - described it as one of the best-known and most consistent cars ever to race on Australian circuits. It was strongly built, could easily run at 120 mph, and often beat some of the most expensive imported cars.   So-Cal was never a non-starter, and never retired in the 70 odd races that owner-driver Frank Walters entered during the two and a half years he owned the car.

And in those races -- averaging one a fortnight -- Walters usually managed to finish in the money.   What is more remarkable still is the fact that he always drove the car to every meeting he competed in. He used the car as a personal transport around Sydney between meetings, and did all his own maintenance work on the SoCal in his home garage.

George Reed built the SoCal in 1948 using a Ford chassis, a Mercury V8 engine and a standard four box as a basis.   Jesse Griffiths took it over and put in a Wilson preselector box. This was not particularly unusual. Tom Sulman had one on his old Maserati.   Griffiths, who was not at the time a member of the Australian Sporting Car club, took the car to Mt Druitt. But since he was not permitted to race, he offered the car to Frank Walters to drive in the last race.

The cars were already going into the grid. Frank hopped in and drove to the end of the airstrip and back to the grid. That was all the practice he had in it. And SoCal won the race.   Frank was clearly impresed with the car, and managed to buy it. Soon after, he got in touch with an American V8 specialist, Alex Xydias, who ran the SoCal speed shop in Burbank, Southern California.  From then on Xydias actually developed the car by correspondence.   Xydias first sent out the Edelbrock head which was regarded as the basic step.   That worked fine but the stock ignition wouldn't handle anything past about 4200 revs per minute. The American sent out a Kong Guild ignition set up.  With this system Xydias said, the engine could go to 8000 rpm. Frank never exceeded 5500 rpm, and at that speed the engine was as 'clean as can be'.

With the Kong ignition such a success, Frank decided that a special camshaft would be in order. he drew a map of the Mountt Druitt circuit a and marked the rises and falls,  making a note of  the engine’s rpm at various points, the change points -- the lot.   Then he wrote a long description of every move he made during one lap of Mt Druitt. He posted this information to Xydias.   A new camshaft was made specially to match the car to Mt Druitt. Then Xydias completed the job by sending out an Edelbrock triple manifold setup.   All done by correspondence !

One time, Frank drove the car to Bathurst, took off the windscreen, fitted the aero screen, turned the headlights around and went on the track.   He won one event and came third in the main event after leading up to the last lap, when the brakes failed at the top of the last straight and he had to coast down the straight round the corner and over the line. Two other cars passed him in the process.   He fixed the brakes in the pits, drove to Orange the next morning, ran sixth in his event and drove home to Sydney that night.

In all the SoCal took part in about 70 or 75 races. Frank won the Racing Car Championship at Mount Druitt in 1954.

"Frank Walters and the So-Cal Special.

Dad grow up in Peakhurst, Sydney, he was a fairly mischievous teenager. At the age of 12 he became interested in flying, he rode his push bike over to Bankstown airport and met a fellow named Goya Henry. They became good friends and Goya taught Dad how to fly in a Tiger Moth. They were the first 2 people to fly under the Harbour Bridge.

Dad joined the airforce when World War Two broke out, stationed in Darwin and flew B. 24 Liberators as the war progressed. After the war Dad bought a car called Echee Mortus (Latin for death arrow) and went to a lot of hill climbs,. He also raced a Plymord. You have the write up that Jon Bartlett wrote.

In one race the So-Cal blow a head gasket, you have this photo. Dad took the head gasket off the Ford and put it on the So-Cal and raced it like that. He didn’t win. I asked him how the old girl went. He replied, "Well it probably didn’t go so well, as one side of the engine would have been a different compression ratio to the other."

My memories of the So-Cal are more of the So-Cal Mark Two that came to be in 1966. Dad became friends with a fellow called Dick Craft in the USA who built up racing car engines. He came over and lived in Sydney. At about the same time Alan Jones' father, Stan Jones, was becoming sick of losing races to the So-Cal and went out and brought, if memory is correct, a Rolls Royce aircraft engine and it ate the other cars on the track including the So-Cal. Uncle Dick was living with a lady and enjoyed drinking, had a bad fight and Dick was accused of stabbing her (through a plate at her and cut her arm) he ended up in Long Bay Jail for a sentence of three years. Dad believed Dick’s side of the story. Dad moved heaven and earth and managed to get uncle Dick out of jail within three months as long as he never stepped foot in Australia again and was duly deported.

In appreciation for what Dad did, Dick built up a 1957 Oldsmobile engine and sent it out as a surprise present. It blew Dad away. It was about 347 cubic inches and did 160 M.P.H. down Conrod Straight. Dad started wining races again and even beating Stan Jones at times. It had a Riley four-speed gearbox and Dad made the adapter-plate for it. It was the strongest gearbox he could find, but third gear used to let go regularly. Dad must have brought every Riley gearbox in Australia. The engine had 6 dual-throat Stromberg carburetors and Dad designed the manifold, and Lynx engineering made it for him. Jesse Griffiths has a brother Vic who spent untold hours helping Dad with the So-Cal. He made the new body and the rollbar. The old Ford motor went into a speed boat which we saw racing and the fellow who bought it blew it up. Dad was disgusted with him and gave him a tongue lashing.

Cams (Confederation of Australian Motor Sport) started bringing in new rules and (god forbid) regulations which caused delays and plenty of headaches for everyone. Dad had to have the pitman-arm shortened (I do not know why) Cams said as long as he had an aircraft engineer do the welding it would be accepted so Dad had that done. Then came another law, that all open wheel racing cars had to have a dual braking system. Dad and Vic made it; it was like a piston with a steering bootie on it and it would not work, no matter what they did it would not work and Dad missed another race. Then Dad and Vic thought, what if they put it on back to front, it worked perfectly. Another law came in, all open wheel racing cars must have a rollbar. There was no time to make it and Dad missed out on the Easter race at Bathurst. Dad hated the roll-bar it was roughly welded had tiny little brackets to hold it on but it looked the part; the So-Cal was back in business. He spent the afternoon at Oran Park to check out new modifications and all was well.

When at Katoomba, June 1968 on practice day Dad did a couple of laps and all was well so he put his foot down and on the first right-hand corner from the starting line; at one hundred miles per-hour, the pitman-arm snapped where it was welded. The So-Cal climbed the bank dug its nose in and flipped over three times. The roll-bar saved his life and consequently Frank did not have such an aversion for it anymore. What blew Dad and Vic out was that the roughly made roll-bar handled the crash and the aircraft engineers weld failed. The So-Cal handled it remarkably well considering the crash.

So-Cal was fixed and continued winning races. At a Bathurst race meeting on Conrod Straight a conrod let go and went through the block. That was the end of that engine. Dad was trying to get parts from the US when Cams brought in another law; no open wheel racing cars was allowed to have an engine over 5000cc. He could not find an engine good enough for his liking so So-Cal’s racing days were over. It was really sad like a death in the family. Dad ended up buying an XT GT. It was a good car but not for racing so he traded it in plus a $1000 bought a Phase Two H0, and raced it a few times but he could not handle the thought that he had to drive it home as it was our family car.

So Dad gave up racing and took to the air once again doing aerobatics and crazy things like that. Some years later, the HO was stolen which broke his heart. He bought an XB, GT which he owned to the day he died. I found it a good home, Dean Canto V8 supercar driver; father bought it as a surprise."