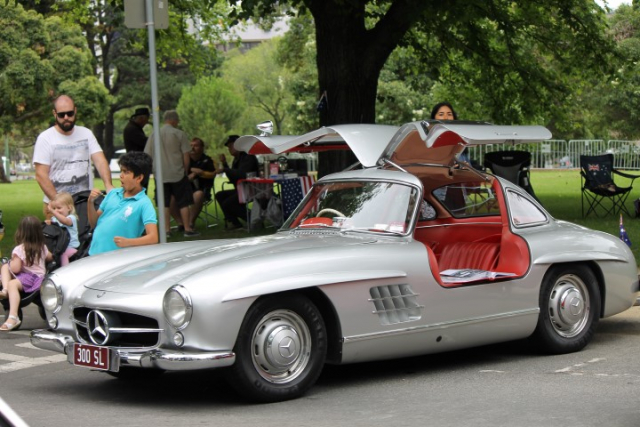 Motormarques turned up at the Australia Day celebrations (January 26, 2017) in the Kings' Domain, Melbourne. This usually consists mainly of a magnificent display of several hundred old and classic motor vehicles.
I was puzzled and thought that I must have made some sort of mistake because, although I had wandered around the gardens for half an hour I was unable to discover more than a handful of cars on display. I learned that the council had made a decision to reduce the number of historic vehicles on display from several hundreds to something like 150.

This decision had not received sufficient publicity for me to have received it. And I turned up with my backpack full of cameras and lenses and a portable camping stool, only to find there was only one short walk to cover the whole display.

The rest of the celebration was given over to street marching by several social and cultural organizations in the city. This, of course, was magnificent, but outside my terms of reference.

The vehicles on display were undeniably magnificent. This article shows those which I most fancied.
Tweet
View the embedded image gallery online at:
https://www.motormarques.com/news/melbourne-desk/item/743-melbourne-city-council-decimates-australia-day-motor-show#sigProId7e37addf90