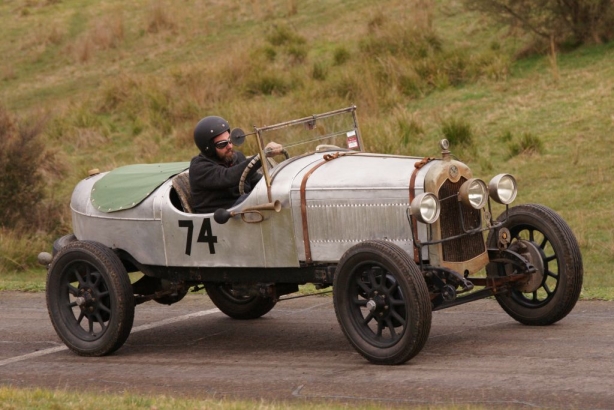 Going back to 1935 by Satnav.  2012 photographs by  Richard Abey.
Melbourne had been cold and wet all week .  Monday to Saturday, the thermometer seldom rose to two figures.  Sunday morning, 19th August 2012, the sun was shining.

Getting to Rob Roy from Geelong didn't start out as promising. I was using a Satnav. It couldn't find Rob Roy Hillclimb. It required a 'destination postcode'. Now. since Rob Roy is a geographic location rather than a specific place, this detail was hard to find.

There was a tattered old street directory on the back seat that actually listed Rob Roy. What I should have been looking for was Clintons Road, Smiths Gully.

Chucking the Satnav onto the back seat, I managed to find Clintons Road, It was a bitumen track that ran off the Kangaroo Ground-Saint Andrews Road, leading to the Bulwidj Reserve. The landmark was an old fashioned farmhouse.

Round the back, after avoiding some magnificent white geese, I was welcomed by a couple of volunteers in a tin sentry box who sold me a souvenir programme for the the  the 75th anniversary of the Rob Roy hillclimb, priced at £2.10s.
Already it was 1935, and at 9.00am  there was a big enthusiastic crowd, just like old times.

The gallery of photos shown below is only a small part of the Richard Abey collection. Many of Richard's photos will appear in the continuially evolving Motormarques catalogue of Drivers and Cars.

Soon to appear also are the photographs of the Rob Roy event taken by Martin Stubbs.