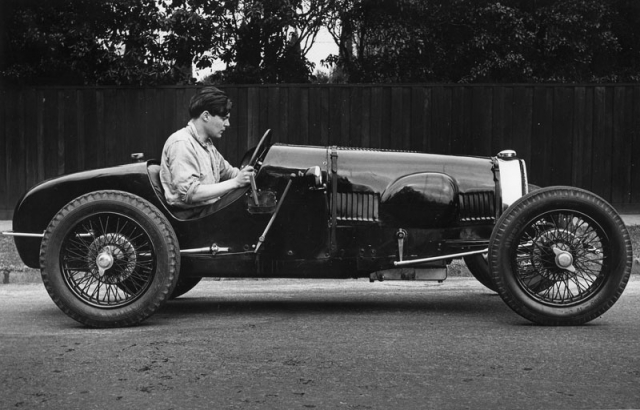 The Anzani Bugatti Special started life as a Type 35 Bugatti which left the factory in 1925 with chassis number 4450. The car was owned by Glen Kidson and was the first Grand Prix Bugatti to compete in England (Brooklands) where wire wheels were fitted and type 37 brakes as deviation from the factory blade cast aluminium wheels.
After a harsh racing career the car was purchased by Lyndon Ducket without the original engine or body having well passed their use by date. Ducket acquired the last Anzani R1 engine produced from the works. Only 12 of these engines were ever built. The Anzani R1 engine was otherwise fitted to the rare Squire car and the Squire company had gone into liquidation. In 1938 Ducket imported the car to Australia and commissioned Cardigan Motor Body Works in Melbourne to construct a new custom body in the GP style and he fitted the Anzani engine, thus the car is known as the Anzani Bugatti Special. Bob King purchased the car in 1962 and used it for a number of years before restoring it to how it was when in Glen Kidston's hands. A 1925 Bugatti Type 35, built on chassis No: 4450 (the chassis used by Lyndon Duckett for the Anzani Bugatti). This car finished 5th in the GP de Provence in February 1925. The yellow band across the bonnet signifies that it ran in the 2 litre class.
Tweet
View the embedded image gallery online at:
https://www.motormarques.com/news/melbourne-desk/item/380-the-anzani-bugatti#sigProId020ad7acfd