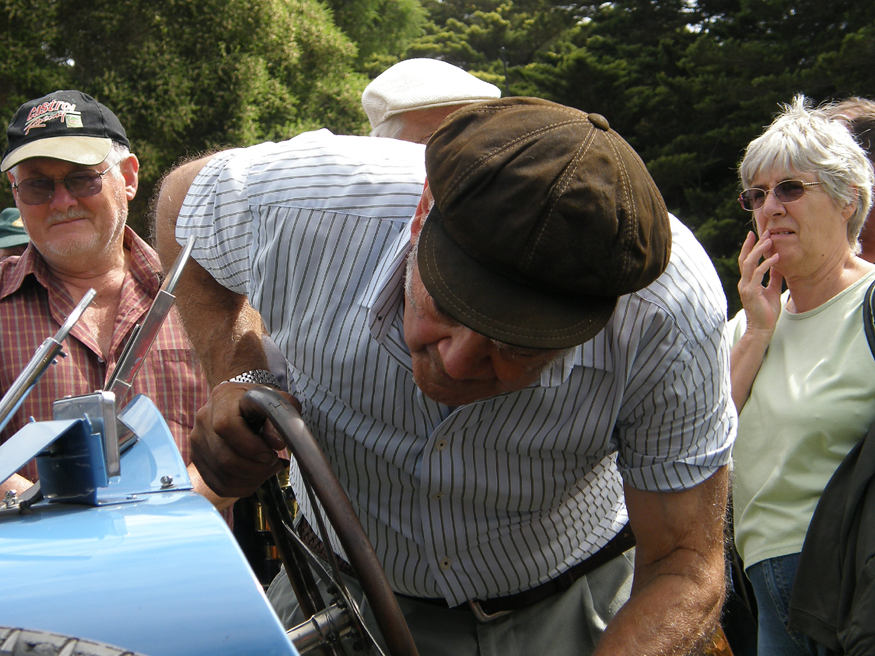 RACV Rally to Mornington 2008     Motormarques photographer, Martin Stubbs and I went to the RACV Rally at Mornington Racecourse on Sunday 20th January 2008.  It was
our first official outing of the year. RACV always puts on a good show that attracts big crowds and hundreds of magnificent cars. And Mornington is a very
pleasant drive down the coast road from Melbourne.

In past years the weather has been wet. Last year the temperature was 40°.  This year the day started off with heavy storm clouds that threatened to spoil
everything, because older cars and drivers don't like getting soaked.  But evidently RACV has the right connections with the High Commissioner for Weather,
because it turned out to be a perfect day, with good sunlight for photographs and just the right amount of warmth to go with whatever was packed in the esky. The whole place was in a good mood. Bill Bolderstone's jumbo-sized loudspeakers were playing hi-fi ragtime which really suited the vintage car show. He had
brought all his equipment in the tray of his T Model Ford utility, and he had spent a couple of hours unwrapping it from waterproof bags, and setting it all out
under the pine trees. As the 700 classic and historic vehicles came through the gates, they were directed to their allocated spaces; their paintwork bright, upholstery like new, and
chromium bright enough to be seen from the moon.
Most of the vehicles (cars, buses, motorcycles, and stationary engines) had left Melbourne about 8.00 am - either driven or towed to the Racecourse. As they
arrived they were greeted by klaxons, hooters, whistles, and fanfares. You could have used up 500 MB of your camera memory in your first half-hour. The Victorian Historic Racing Register presented some of the cars that will be performing at Phillip Island in March, including what to me was the sensation of the show: the appearance of Maybach I and Maybach II side by side.
Maybach I, now owned and campaigned by Bob Harborow, has been Australia's best-known racing Special since its first appearance in the early 1950s. There was a Maybach II that was built soon after the first car, but it was destroyed in a crash in 1954.

And suddenly it was back. John Shepherd is the man behiind the reborn Maybach II. It is over 50 years siince the two cars have been seen together. They are almost identical in appearance. It would be great (but confusing) to see them race against each other at the big International istoric meeting at Phillip Island in March 2008.
Below are some of the other cars in the Rally.