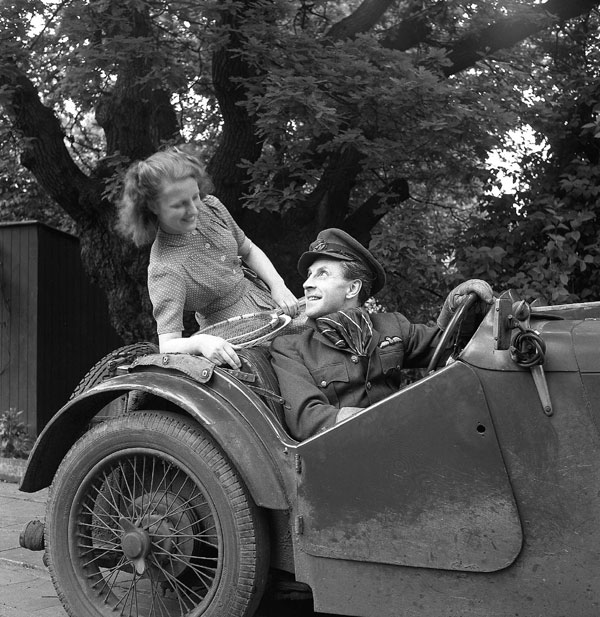 Last of the Dacre Stubbs Archive Photos from the UK in the 1940s
Martin Stubbs writes during a day of 40º heat: "Yesterday was hot and not conducive to working outside although I did do a little on the Triumph single seater. So, felt up to sitting at the computer, and seeing we are into January, put the last lot of images from the UK together before starting on the Australian events in the collection. "
Included in this page are images shot in 1946 to promote the serialized BBC radio play, 'The Baker Family' including three images (unknown photographer) of my father taking the photos with, I gather, the cast or production team. Then follow images of my mother's Austin 7 'Chummy' which was purchased for five pounds during the war, the car looks fairly standard but my father did quite a lot to increase the performance of the motor. The location is 'Sandpit' Cottage, Ruffits Wood, Chipstead, Surrey.

Next come six photos taken at Prescott Hillclimb 1947, and much to my disappointment that there were not more, perhaps he ran out of film?

Lastly, three posed images of the Rivers-Fletcher Equipe taken at 'Gransden Lodge', a RAF base used for motor sport. I think the River-Fletcher family used the images for Christmas cards. If you study these images, the body language suggest all sorts of dynamics going on. I may be wrong but didn't one of our supporters of Motormarques suggest  that the car was not a K3 Magnette but an NA?


After the remarkable series of photographs were  taken just after the War, while he was still in the UK, Dacre Stubbs and his young family emigrated to Australia.

His photographs of the motor racing scene there, are unique and memorable, including many of the great names of  Australian  motor sport.

We look forward - with Martin Stubbs' generous assistance and enthusiasm - to continuing the series in forthcoming issues.
NOTE: James Holland has sent us the following information:
Regarding the Rivers Fletcher MG N Type. Most N Types were unblown and all blown MGs had the supercharger mounted between the front dumbirons. Incidentally the Rivers Fletcher car has recently changed hands here in the UK and is to be returned to the spec Rivers (and the original owner John Dugdale) initially ran it in which is as you see it in the photos. Later Rivers shortened it and it later ended up in Ireland in butchered form with an SA power unit.The MG was rescued some time ago and restored with the correct type of engine, albeit still in short chassis form. It has been active in VSCC events over the last few years. I think I'm correct in saying it is now supercharged. As I mentioned the new owner intends to rebuild it to how it was pre war.
Tweet