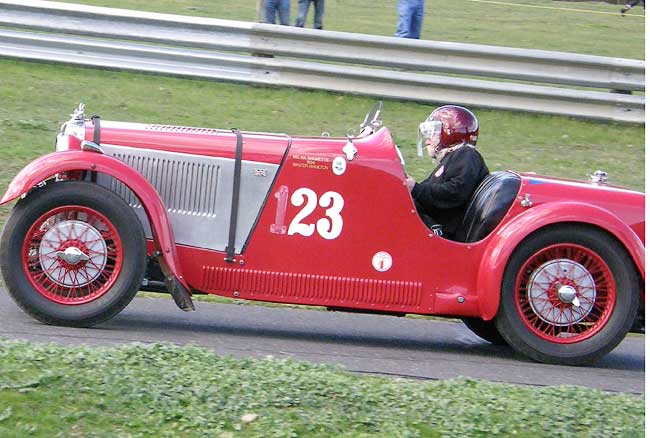 Bill Hunter presents photos, video, and list of starters at VSCC Hillclimb
Magnificent VSCC meeting, August 26 2007 At the Vintage Sports Car Club on Sunday August 26, 100 or so brilliant cars that we haven't seen for decades gathered in warm sunshine at Rob Roy hill climb in the Christmas Hills, not far out of Melbourne.  Prewar MG, Austin, Singer, Alvis, Vauxhall, Frazer Nash, Lagonda and Riley arrived for scrutineering at 9.00, alongside even greater treasures like a Zagato--bodied Alfa Romeo, two or three Bugattis, and a thundering great Railton. The competitor list can be seen at the foot of this article. (Click on 'Next' at foot of this page)   The VSCC, organisers of the annual event, have the admirable principle of promoting the regular use of historic cars, in the belief that they don't belong in museums, or in static displays in public parks and gardens.  Cars that were built as sports cars are expected to keep on behaving as such.  Now, as 50 years ago, it is the owner, probably now retired and with sufficient time, enthusiasm and superannuation who takes on the job of keeping the tradition alive.

I had a word with David Bell, custodian of the 1935 Railton that was one of the fastest cars of the day on the hill.  Car number 57 was owned by David's father who began work on stripping down the road going original to the majestic brute that it now is.  David has continued working on the car to the point where even the out and out motor racing cars can't keep up with it.

Video Part 2           The blue Senechal was originally built in France in 1923. The car on show at Rob Roy was re-constructed from parts found in Australia. Senechal built ‘Sport’ and ‘Grand Sport’ machines until the company was taken over by Chenard et Walcker in the late 1920s.     Car 9 - the Alfa 1750 has done 94 mph at Phillip Island but owner Terry Forrest is sure it will top the hundred.  It is rock-steady and handles well. Engine, chassis and suspension are excellent - strong with perfect power to weight ratio. With the supercharger, the car is a world champion.           Ted Geermans’ sparkling black 1700 cc 1936 Peugeot 302 has just arrived in Australia from France. It was purchased in Reims about three weeks ago. The last two digits of the old number plates still on the car suggest that the car had been registered in Paris.     Martin Stubbs, Allan Tyrell, Max Robinson, Trevor Cole and Glenn Bishop proved that old Austin Sevens never die.  George Hetrel and Paul Latham let the crowd know what music an angry Bugatti can still make, seven MGs ranging from 1933 to 1949 showed why the mark had such a reputation in its day.   The video accompanying this introduction, and the photographs of cars and competitors, will give the reader an idea of the glamour and excitement of the meeting.
Tweet