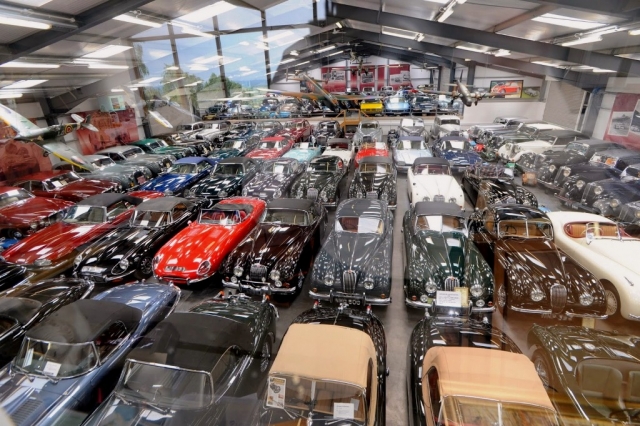 Jaguar Land Rover's Special Operations division has acquired Britain's largest private car collection of 543 classic motorcars. This enormous collection of cars was created by tooth expert and entrepreneur Dr.James Hull. He made his fortune by building up a chain of dental surgeries and selling them in 2006 to a private equity firm. James began his collection while working as a dentist in South Wales where he opened a practice in 1987. During the years he travelled around the world to purchase cars for his collection.
Dr Hull, 53, has battled cancer three times in the past four years. Because of his health issues, he decided last May to sell up his collection but was only willing to sell the huge collection as one lot. The collection, located in Herefordshire, is made up of 543 classic vehicles, 365 pedal cars and loads of memorabilia. A number of the cars have appeared at motor shows around the world, competed in the Mille Miglia and have even been used for the Queen's 80th birthday parade.
There are of more than 130 restored Jaguars, from the very beginning of the marque as a coachbuilder in the 20s to over 20 XJ Saloons of different versions. In between are practically all other Jaguar models represented as the prewar SS100, seven XK 120s (including a rare aluminum version), C-and D-Types, a XK-SS, eight E-Types, 30 classic Jaguar 'Mark' saloons and 19 XJS models. The Jaguar D-Type will be worth in excess of £4 million while the C-Type is also worth millions. The collection includes Lord Mountbatten's Mini Traveller, Winston Churchill's Austin,and a Bentley owned by Elton John.
The purchase of the collection by the new Special Operations Division is part of a larger commitment of Jaguar / Land Rover to protect the rich heritage of both brands and bring attention to the audience. This Special Operations division may have only just been created but they're already responsible for cars like the production-spec F-Type Project 7, Range Rover Sport SVR, the Tour de France Jaguar F-Type R Coupe and the construction of six perfect reproductions of the 1963 Lightweight E-Type. Some of the cars from the extensive collection will be maintained at the firm's workshop in Coventry while most of them will remain in their specially built buildings in Hertfordshire.
Originally put up for sale for £100 million in May, it is unclear how much Jaguar Land Rover has paid for the collection, but it is suggested that the cars were valued between 25 million and 35 million pounds.
Tweet