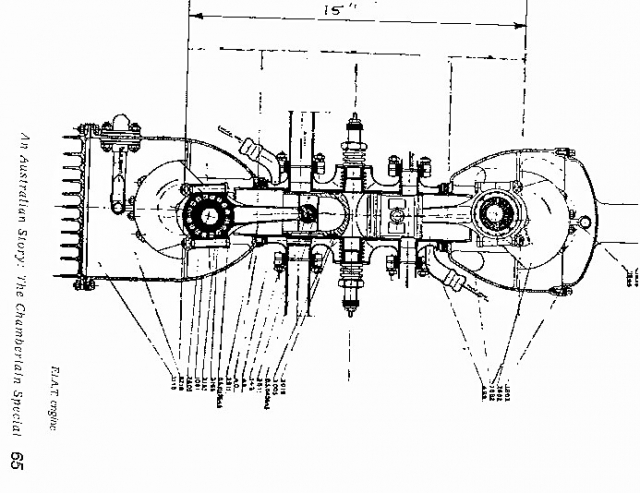 The Chamberlain Special - a car created 50 years ago in Melbourne.
In 2003, Peleus Press published a book by John V. Hazelden - "The Chamberlain - An Australian Story"
"Depending on who you talk to," John Hazelden wrote, "the Chamberlain Special was either a villainous piece of machinery that never quite worked out or the most original masterpiece of automotive engineering in the history of Australian motor racing."
The car featured the following:
1.  A four cylinder, stepped bore, eight piston, vertically opposed, supercharged, two stroke engine with two crankshafts one of which runs through the skirts of the top pistons;
2.  An engine which runs to 8000 RPM.
3.  Twin ignition with two plugs per cylinder, producing 64,000 sparks per minute (from eight coils) at 8000 engine RPM;
4.  Front wheel drive with inboard brakes;
5.  Four wheel independent suspension;
6.  A space friend of small diameter tubes, much of it triangulated;
7.  An 1100 cc 85+ bhp motor;
8.  Virtually the whole car built in Australia.
Not surprisingly, the first run of 500 copies of the book has entirely sold out.
Motormarques reader, Mr Greg Hodson has passed on the following information:
"I have just found out a reprint is being published and have ordered a copy through " plough book sales, obviously a book company to do with tractors--apparently there will be 1000 copies.