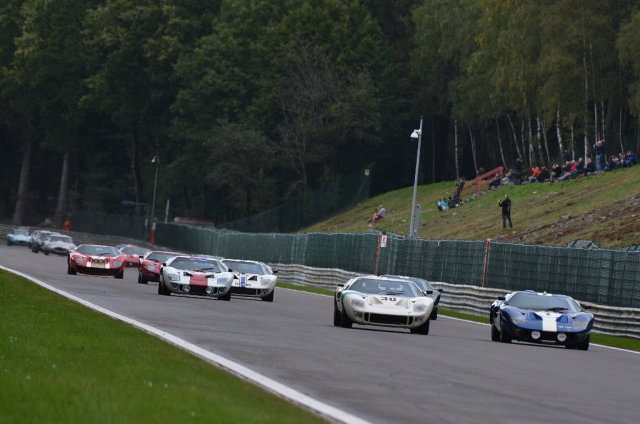 The Spa Six Hours definitely rangs itself in the top 5 of the most important and attractive European historic racing car meetings. For the spectators this event is most enjoyable as there is access to almost all areas. Paddocks are open and viewing the mechanics working on the cars is always interesting. The Pit Bar Restaurant, located at the top of the pit building, is the ideal place to have a drink and enjoy the “all-you-can-eat” buffet dinner. Next to the restaurant is the terrace which offers a breathtaking panoramic view of the most beautiful parts of the circuit, overlooking the pits, the finish line, the hairpin and the famous L’Eau Rouge. Just like last year the racing-weekend was characterized by erratic weather conditions. Friday remained dry but Saturday started very cloudly and there several showers during the day. On Sunday it rained constantly until half past three in the afternoon. For all participants there’s the possibility of a non-timed free practice and testing on Thursday with more restricted noise standards. Friday is the official beginning of the meeting with qualifications for each race class.
Tweet
View the embedded image gallery online at:
https://www.motormarques.com/news/european-desk/item/786-29th-spa-six-hours-francorchamps-29-september-2-october-2022#sigProId914dae46fa