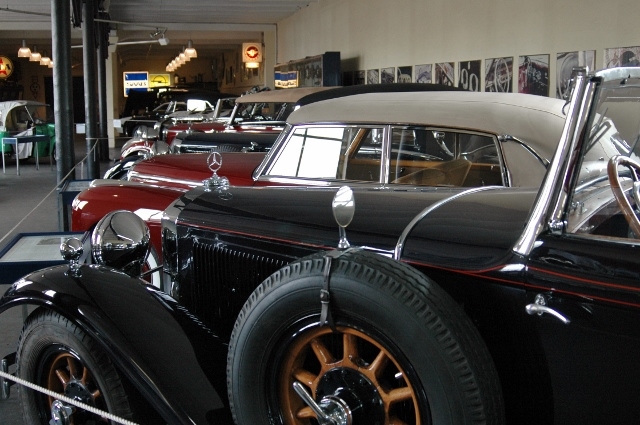 In the industrial area of the German town Melle, an automobile-museum is located in a former furniture factory. The Automuseum Melle was founded in Ibbenbüren, in 1984. In 1997 the museum moved into the premises of the former furniture factory Melchersmann. All the vehicles exhibited in the museum are from private owners and the cars must be functional and regularly used. Most of the cars are exhibited for periods of six months after which the owners will drive them out again and do the necessary maintenance. During the past 30 years around 2000 different historical vehicles have been shown. About 200 cars are on display, about 20 cars on the ground floor and the other cars are devided over the two upper floors.
The crambed space in the building makes the cars standing very close to each other, almost like cars in a parking garage. Also the lack of lightning makes it a bid difficult to spot all details of the cars. The ground floor of the museum and a part of the first floor is reserved for cars of the marque Glas. Glas was originally a maker of farm machinery. Glas evolved first into a producer of motor scooters, then small automobiles were produced, called the Goggomobil. The Goggomobil was a cash machine, but its bigger brother - later renamed in Isar – wasn’t so succesful. The Glas saloon cars (the 04 Series) were well-build cars with a rather modern aluminium with a single overhead belt-driven camshaft. Only the bodywork wasn’t very attractive. The luxury, large four-door model 1700, on the other hand, was more successful. The design was Italian, by Frua. In 1964 the company introduced the Glas 1300GT Coupé and later the 1700GT. The Coupé body was also designed by Pietro Frua from Italy. A very pretty and elegant car for the home market but for the export market the car was quit expensive. Competition for these models, mostly from British and Italian cars, was tough.

In 1965 the new 2600 V8 coupe was unveiled at the Frankfurt Motorshow and attracted a lot of attention. Again it was the Italian designer Frua responsible for the bodywork. However there was a downside in choosing the Italian design and that was that models created around the same time in an Italian studio often copied each other. Frua's coupe was no exception, it bore a striking similarity to the Maserati Quattroporte, a 4-door Frua design that was introduced in 1963. Within a couple of months Germans made jokes about the 2600 GT calling it the "Glaserati". The car had a self supporting steel body with independent front suspension by triangles, coil springs and telescopic shocks. In the rear there was an advanced De Dion style live axle with Panhard rod and half elliptic springs combined with self levelling hydropneumatic shocks. The most remarkable piece of engineering was the V8 engine, completely developed by the company itself. In fact the new engine was created by combining two 1300 cc 4-cylinder engines of the Glas 1304 model on a new crankcase. It produced 150 Bhp at 5600 rpm. This luxury model didn't help the financial situation of Glas and by the end of 1966 the company was purchased by BMW. BMW immediately retired most of the Glas saloon car range, including all of the outdated microcars. The coupé models were kept in production by BMW, but fitted with BMW engines. The Glas 1300 GT coupe was fitted with a 1.6-litre BMW engine and renamed BMW 1600 GT. BMW also fitted a 3-litre engine into the 2600GT model and renamed it 3000 GT. This model kept the Glas name, but had a BMW logo in the front and rear. In 1968 BMW created their own large coupe, the BMW 2800 CS, and this meant the end for Glas. Of the model 2600 GT 277 cars were built and 389 cars of the model 3000 GT were produced.