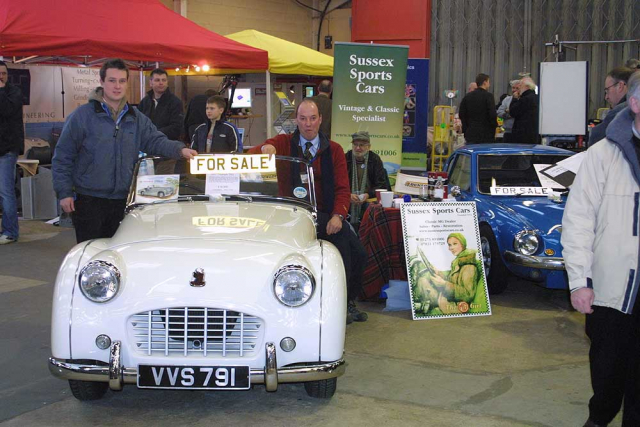 
Blockley Tyres are now a well established company founded by Julian Majzub who is a serious competitor and collector of vintage cars,  Apart from a selection of their tyres they featured the ex Freddie Dixon Riley with it’s fascinating line up of 6 Amal carburettors.
The Singer Owners Club had, for the first time, put on a very good stand on which they displayed the 1937 Model B37.  This is one of 11 cars built and was retained by the factory.  It features a 1 ½ litre 4 cylinder ohc engine and factory built coachwork.
Porsche cars are always fascinating and the 904 was particularly so.  We had intended to buy one to replace the Marcos in 1964 but it was too expensive for a private entrant, plus it was heavy, complicated and rapidly superceded.
The trade stands were too numerous to list but we were intrigued by that of Newman Camshafts for the simple reason that they had brought a camshaft blank for an Austin Seven to show us.  We are planning to raise the output of our Austin racer above the 85 bhp currently being produced!
Other friends were manning the Sussex Sports Cars stand where they plied us with goats cheese and wine.  It is interesting to learn about the buoyancy in the market for Classic cars.  Quality is the byword as there is a lot of badly restored rubbish around.
Motorcycles were much in evidence this year and one particularly interesting machine on show was the Paton racer.  Built by Roberto Pattoni using modern technology this racer, the BIC500 8v RU is being built to order for discerning customers who wish to display Italian exotica.