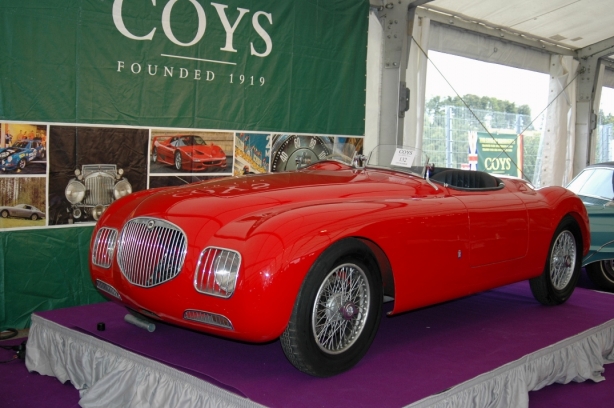 The auction house Coys offered a range of 72 extraordinary vehicles that make up an exhibit all of its own. The current situation of the European classic car market is as transparent as it can be at an auction. Some sporting highlights came under the hammer such as a McLaren M8F, a 2005 Maserati MC 12 Corsa and a 1986 Minardi M186 Formula 1 car.
The ex- Michael SchumacherBenetton-Ford B191 was due to go up for auction, but the car was sold ahead of going under the hammer for just £195,000*. Offered in excellent race-ready condition, included spare-parts and a comprehensive file documenting the car's history, restoration and its most recent race-preparation last year this car was a real bargain.

The 1972 McLaren M8F, owned and raced by German Peter Hoffmann since 1973, was estimated at a strong 270,000 - 350,000 Euros. From 1992 until present day chassis-number 2-72  competed in the Super Sports Cup and took a lot of pole positions. This car is restored and maintained to the highest requirements of authenticity and is mainly based on original components out of the period of 1972 (engine block of Reynolds company out of aluminium). For respecting the current safety specification and the requirements the car has been modified to allow it to compete and fill current class regulations. The Hoffmann M8F was sold for 265,000 Euros.

During the 1986 racing-season the Minardi M186 was driven by Alessandro Nannini and Andrea de Cesaris. Fitted with a Cosworth engine, that had been track tested recently, the Minardi came complete with a paddock back air compressor starter, air bottle and trolley, a set of four tyres and wheels for the car and a set of new rain tyres. In fine order this should be an excellent entry into many historic F1 events. The estimated price was between 75,000 and  85,000 Euros, highest bid was 70,000 Euros. The highest bidder was told “visit us after the auction” so it probably sold afterwards.

Lot 141 was a 1954 Moretti 750 Spider Bialbero Michelotti. A tiny little racing car with a 750 cc. twin cam engine, enjoyed quite a bit of success at events like the Mille Miglia and also took part in Le Mans. Most recently the car was sold by Christophe Pfund at Retromobile to the current owner a couple of years ago. The car has since been subject to a major mechanical restoration. Chassis 1601 offers the unique opportunity to acquire a very special car that is eligible for the Mille Miglia. Estimated price was high at 240,000 - 280,000 Euros but the car was sold for 180,000 Euros

The auctioned 1938 BMW/AFM 328 Roadster was delivered new to the President Automobile Club Hungaria, Mr Ungarn. In turn the car was sold to a German racing driver – Chrestera, in 39' who campaigned the car extensively that year. During WWII the car stayed in Hungaria. After the war the car was purchased by Alfred Von Falkenhausen (AFM), an engineer who worked for BMW on the 328's before the war. Like so many specialists he opened a garage in Munich where he tuned pre-war 328s. With no significant new cars being produced he began converting some of them into single-seaters and in 1948 went on to build his own car marque with the 328's engine. It was at this time that the original 328 body was removed and the car received the Von Faulkenhausen AFM treatment on its original 328 chassis. The car was sold changing hands to Gunther Bechem. The car changed hands to a Berlin based family, where it remained until the complete car was purchased and sold by the BMW specialist Jan Popelar to the Franzke Family. During the 90s the body was re-built and the chassis restored and the original engine overhauled with invoices of over 100,000 DM. The restoration was completed in 2005. The unexpected death of Mr Franzkes has resulted in the car being offered for sale at this auction. The estimated price was 350,000 - 380,000 Euros but the highest bid was 320,000 Euros, so the auctioneer told the audience “Can’t sell it for that money”.

A real bargain was the 1959 MG A Twin Cam Coupé this German registered car was entered in prestigious rallies and races like Targa Florio, Eifel Klassik, Oldtimer Festival, Oldtimer Grand Prix, 300 km Nordschleife and many more. The lucky buyer paid 19,000 Euros.  A 1966 Lotus Cortina MK I, completely restored from 2004 – 2006, complete with FIA papers, was sold for a mere 24,000 Euros.

Most expensive car at this auction was a 2005 Maserati MC 12 Corsa, one owner from new and just 2,000 kms on the clock. The Corsa-version was not homologated for road-use and was intended strictly for private test- and track-day purposes. This Corsa is no exception, having covered just 2'000 km, mostly accumulated when run-in by an internationally acknowledged professional race driver during an extensive set-up-session when it underwent a meticulous fine-tuning. This dazzlingly powerful machine changed hands for 900,000 Euros.

Lot 124 was a Beacham modified 1961 Jaguar XK150 Fixed head Coupé. Beacham is a New Zealand company which restores and modernizes all kind of Jaguars. Beacham Jaguars are incredibly well put together, and further enhanced through the fitment of modern safety systems. The XK150 chassis is uniquely re-engineered by Beacham to incorporate a full Independent rear suspension, rack & pinion power steering and front & rear vented racing disc brakes. The high performance 4.0  370 Bhp V8 engine and enhanced chassis deliver an exceptional driving experience. A driver and passenger airbag system is fitted along with 3 point inertia seatbelts. ABS brakes and traction control. The more precise handling make it a car that could definitely be used every day. Completed by Beacham and built between 2007- 2009 this car fetched a rather low 78,000 Euros.

Built as a semi works racing bike the 1963 Honda CR 72 on offer, is reportedly 1 of only 38 made by Honda. These bikes were given on loan to works drivers for racing. This CR 72, is, according to the vendor matching numbers, and was successfully campaigned for many years in Czechoslovakia. This stunning race bike came to Germany some years ago, where it received a restoration to near concourse standard, using only Honda parts. Since then, the bike has never raced and has resided in the vendor's collection. This bike was sold to the United States for 55,000 Euros.

The 1937 Mercedes-Benz 320 N - Special Roadster  is one of only nine made by coachbuilder Sindelfinger during 1937 with this specific body. Approximately 25 years ago, the car was delivered to a well known German restorer who embarked on a several years long rebuild to special roadster specification, all to concourse condition, in which the car still is today. After this extensive work, the car found its way to collectors in Italy, Austria and back to Germany. Today the car presents itself still in nearly new condition. The car was sold just under the estimate price for 440,000 Euros.

*All prices mentioned in this report are the hammered prices without sales commission. The buyer’s commission rate is 15% on the first 50,000 Euros and 10% on any amount thereafter of the final Hammer Price.

Text and photos by Guus Docen
Key to images: