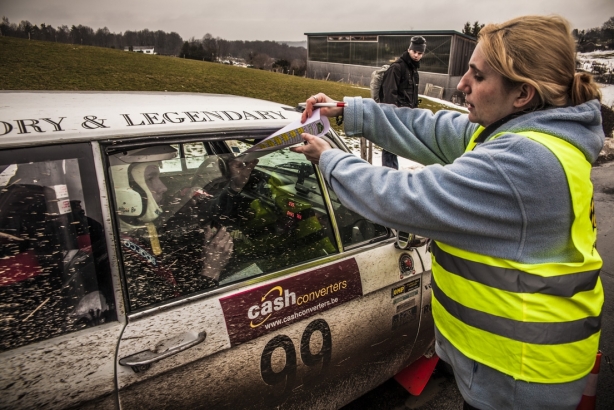 There’s a series of tests on closed roads (including sections from special classic routes) with stops in historic sites. This year’s regularity rally was greeted with snowy and icy conditions that made navigating the Ardennes forest even more difficult and despite the cold weather the seventh edition attracted a fair amount of spectators.

Former WRC driver Francois Duval in a Ford Escort MkII took the lead driving very aggressively, and it was Belgian WRC successor Thierry Neuville who took over the lead when Duval’s gearbox expired. But just before the end of the 2nd stage the fuel line broke in engine bay bay of  Neuvilles 1985 Citroen Visa 1000 Pistes , fuel sprayed over the exhaust manifold causing a massive fire in the engine. After Neuville’s early retirement it was again Duval who took the lead, he was in the rally again because the mechanics were able to replace the broken gearbox of the Escort. Finally he won the Legend Boucles de Spa !