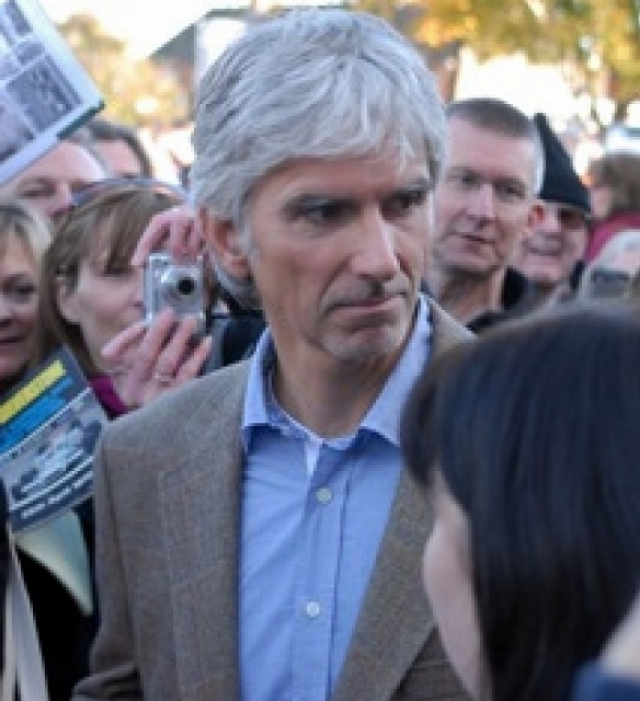 We are very lucky insomuch that a town the size of  Bourne has much of the skills necessary to lay everything on and not only that, were willing to donate their services for nothing.  It is of course very helpful that the foremost BRM specialists, Hall & Hall are based in the town and Rick Hall would be Chairing the committee. The aim of the day was to put on a great motor sport spectacle which would both involve and benefit the small town, hopefully bring in a little money to it’s struggling business’s and give a much needed boost to the morale of the townsfolk in these tough times.  Any surplus raised, it was decided would go to local charities. With the benchmark set high from the last event, we knew that it had to surpass this and as all comments received since – it did.

An aspect that needed to be taken into consideration was parking limitations and with this in mind and our Bus Company director’s (A committee member) co-operation, a park and ride facility was laid on from the outskirts of town which worked beautifully.

We had decided to lay on a little more in the way of entertainment by way of a Trade Village on the sports field adjacent to the start and finish area.  This provided music, food and trade stands and gave another dimension to the event.

The police estimate for attendance was in excess of 30.000 people.  The grandstands that we had erected on the course were sold out well beforehand and all pavement space choc full on the day.

The main paddock area was at the side of the Corn Exchange this was abuzz all day with a constant scramble for photos and autographs amid the cars all parked up ready for action.  The secondary paddock was in the local Primary School yard which also attracted huge crowds.

Proceedings began with an announcement of the BBC news for the day in 1962 by Neville Hay, our excellent commentator followed by parade of pre-1963 vehicles of all sorts that would have been typically around town at the time.  A procession of period racing transporters followed.  Five vintage tourers picked up our V.I.P., guests to take them round the route and let the crowds show their appreciation.  We had invited Damon Hill to drive his Father’s championship winning P78/1(Old Faithfull) and to our delight the rest of the family were keen to come too so Bette Hill and the two sisters were there.  Ex-Team Drivers, Richard Attwood, Howden Ganley and Jackie Oliver had been keen to come and very late in the day, Sir Jackie Stewart contacted to say that his Formula One schedule had changed and that he would love to be with us.

The first demonstrations were of the representative BRMs being driven through, the exception being a single ERA to show the origins.  The crowd were wildly enthusiastic as the first cars made their appearance and when Damon appeared in the P78/1 certainly went up a gear.  He was understandably emotional that day and sitting next to his Mother in the stand, I saw that she was even more so.  As she pointed out, they spent quite a bit of time in Bourne during Graham’s time with the team and many old acquaintances were encountered that day especially with the old mechanics.  Sir Jackie drove both his  P261  BRM and the World Championship Elf Tyrrell 006 giving the crowds plenty to cheer about as he burned rubber by the grandstands.

Another feature of the programme was a representative grid line up of the 1962 season which included Lotus, Cooper, BRM, Lola  and several other marque examples.  This too thrilled the spectators as the noise, smoke and sheer spectacle was truly impressive as they all started off by the grandstands.

The day was rounded off with another run of the BRMs completing a celebration of all that is best in motorsport and importantly Britain.

All feedback indicates that the day was a resounding success, a magical day for any motorsport fan.  We were delighted that there were no crowd problems, the whole mood of the day was pure, wholehearted enjoyment.  The first aid services were not required and neither was any police intervention. Having said that, a policeman was seen clocking Sir Jackie with his radar gun down the main road.  Apparently a joke. The Chief Constable who was sitting in the grandstand and witnessed this was appalled and said that it had blown a hole in his P.R., a mile wide…. Oh well, maybe he knows how the rest of us feel when we see one!  Even when we are behaving ourselves.

I was proud to be part of such a brilliant committee and yes, it was very demanding for many months but well worth the challenges and the exhaustion afterwards.  The charities will be benefitting from significant amounts.  The two main beneficiaries are the region’s Air Ambulance service and the Bourne Open Air Swimming Pool, both of which entirely depend on donations.