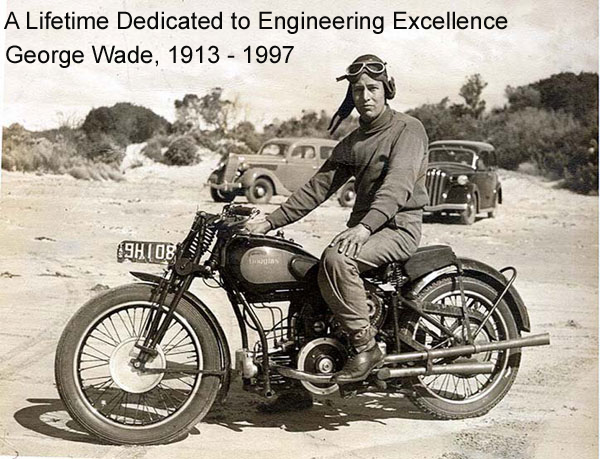 From Martin Stubbs
‘He was the second youngest of ten children and soon showed an aptitude for engineering demonstrated when at the age of sixteen he converted a truck engine into a power source to run a generator for the township lighting.’ George was born in the rural town of Horsham, located in the Wimmera district of Victoria. The family ran the general store in the nearby town of Goroke and as the business grew they expanded aquiring a further store in Pimpinio. A significant event for the family was the purchased a Willys Overland, the second car in the Wimmera region, the first being the Doctors Whippet. At Garoke the store consisted of two adjoining buildings which tragically were burnt to the ground, they lost lost all their possessions except for the piano. This prompted them to move to Launceston, Tasmania, where they lost everything again including this time the piano in the 1927 floods when the Tamar River burst its banks. Life in the Wade household could not have been easy and one reflects on how this influenced George in his later life. As well as all things mechanical his other great interest was music, no doubt encouraged by his father who was Band Master for the Launceston Brass Band, a prestigeous postion which benefited the family by providing job opportunities for all. The band was a family affair, George played the trombone and euphonium, his three brothers James, Stewart and Jack played various other instruments.

After finishing school George became apprenticed to Mitchell Motors (Tasmania’s first Chevrolet dealership) under his uncle at their banches in Launceston and Forth. George also raced motorcycles and bought his first Douglas when he started his apprenticeship. Over a period of time he extensively modified the frame and engine (reshaping the camshaft by hand) for sand and circuit racing both as a solo and side-car outfit. The north coast of Tasmania had many excellant beaches for sand racing and makeshift airstrips for pilots, Bakers, Greens and Brickmakers but to name a few. He was soon winning many events and in 1935 broke the Tasmanian speed record at Bakers Beach with a run of 118.4 mph which stood until 1948. Thinking they might be interested to hear of his achievment with one of their product he wrote to the Douglas Company in the UK. They replied that ‘their bikes were built for road work not racetracks’. Despite this lack of enthusiasm George always remained faithful to Douglas motorcycles.

He also became involved in the newly set up Rapson Tyre Company by testing their products by delivering Launceston newspapers to Hobart. On one of these trips in George’s cut-down Model T Ford Speedster he left the road at high speed in a forest section. He and his companion were discovered the worse for wear next morning. His skill at tuning engines was soon recognised by the motorsport fraternity including speed boat racing enthusiasts. Speed boat racing was very popular on the Tamar River at that time. So started his life long passion for developing high performance engines which was to shape his future.

Next, George started work at Tasmanian Aerial Services, a business founded by Victor and Ivan Holyman in 1932, as a maintenance engineer servicing mainly their DH86 de Havilland Dragon Rapides and later the early Douglas DC2s when the company changed its name to Australian National Airways. Charles McGrath, of the then young company Repco, also recognized his skills and persuaded him to join their Launceston workshop as foreman. With the intervention of World War 2 George supervised the conversion of the workshops to the production of munitions, and later he was seconded to the Commonwealth Aircraft Factory at Fishermans Bend, Victoria, to maintain the production of components for Wirraway and Beaufort aircraft engines. His dedication to the war effort and the long hours of work severely took its toll on his health, to the extent that it was nearly fatal. After the war he returned to his family in Launceston before taking up the post of Repco’s A.E.D. Workshop Manager for Victoria, and the responsibility for development of Goldstar Replacement Motors branches and workshops throughout Australia. Typical of the man he was, in 1956 Repco sent him to America to look at purchasing camshaft grinding machines as part of their engine reconditioning service. He returned empty handed and told Repco that they were going to build their own,  which would be far more advanced than anything overseas.

Maybach Special Meanwhile his interest in motor sport and performance engines was maintained by providing input into the famous ‘Maybach Special’. Charlie Dean, Director of Research, along with Frank Hallam, was keen to demonstrate Repco’s profile in motor sport. We can assume also that this gave them an excuse to have some fun. They wanted to create a post-war racing car that could take on the overseas competition. The Maybach went on to win many races in Australia and New Zealand.  It was rebuilt as three different versions and was driven by some of Australia’s leading drivers including Stan Jones who drove it to win the 1954 New Zealand Grand Prix. Other interesting projects that involved George, in conjunction with Charlie Dean and Phil Irving, was the ‘Repco Record’, a closed sports car based on the Holden engine and parts, designed to be used as a test bed for Repco components. Painted bright yellow it caused a sensation whenever it was driven in public. Most importantly, the development of the Repco Brabham V8 engine, particularly the overhead valve gear, involved George's particular area of expertise. The Repco Brabham became the first car with an Australian engine to win a number of Grands Prix and a World Championship.

Mainly due to recurring ill health and the changes taking place within Repco, George made the decision in 1962 to start Wade Camshafts Pty. Ltd., with the assistance of his old friend Ron Hastings (Ron’s son Chris is General Manager of Wade Camshafts today) They commenced business in a Carlton factory behind the Repco premises in Melbourne. As part of a financial arrangement with Repco he wasable to purchase two, and later a further three, of his Repco Camshaft Grinding Machines. This successful business grew rapidly with the demand for camshaft development for the expanding domestic GMH, Ford and Nissan vehicle manufacturing. With all this growth, in 1987,  the business moved to a much larger premises in North Melbourne. In motor racing Wade Camshafts’ reputation was such that they also received work from Brabham Racing and March Formula 1 Teams and prominent Australian Touring Car drivers and teams. Wade Camshafts also made Control Camshafts for various other classes.

George was a very modest man with extraordinary skills. You get the feeling from those who knew him that he was the brains behind so much of the early development of automotive engineering in Australia, and has probably not received the full acknowledgement that is his due. As the saying goes ‘There are those that do it and there are those that talk about it’.

Text prepared by Martin Stubbs with the assistance of
Sue and Pam Wade, and Barry Quantrell.