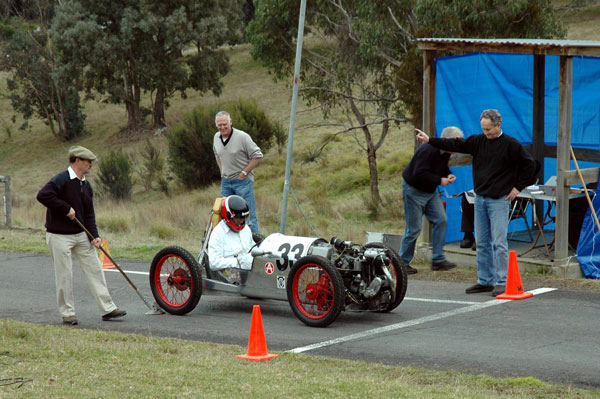 
The WGM racing car was built by Maurie Wheeler and Jack Gow during the period of 1950-1951, to comply with the then Formula 3, 500cc regulations.
Both men were employed by the Commonwealth Aircraft Corporation in Fishermans Bend, Victoria, hence the somewhat aeronautical construction of the car.
It was originally conceived to provide something different and more interesting than the general run of rear engined ‘Cooper’ type vehicles. In the construction the sheet metal and fabrication was done by Jack and the mechanical work and machining by Maurie. Between them they put in 3-4,000 hours of work on the car as a conservative estimate.
It was raced with some success and due to its light weight was quite competitive. The first public appearance was Rob Roy during 1952 and the car appeared later at Templestowe Hillclimb, Fishermans Bend, Altona and Darley race meetings. Its last appearance being the Argus Cup, a handicap race over 16 laps for racing cars at the Albert Park circuit at the time of the 1956 Melbourne Olympic Games.
Maurie Wheeler died in 1994, but Jack Gow is alive and well and still takes a keen interest in the car today.
The WGM is currently owned by Chester McKaige

General Layout
Front wheel drive with the engine mounted ahead of the front axle.
Wheels independendently mounted at the front and a beam axle at the rear.
The chassis is a backbone box section of riveted aluminium alloy.
Bodywork of aluminium alloy except for the nose cone which is fibreglass.

Engine
A heavily developed 1948 500cc., single cylinder Matchless G80, the compression ratio raised to 12:1, a domed racing piston and an Amal racing carburettor was also fitted. Steel flywheel and a re-designed and strengthened crankpin. The drive side of the crankcase was reinforced and larger main bearings fitted along with high lift racing cams, Austenitic steel valves and chomium copper valve guides. An auxiliary gearbox was fitted to the timing side of the engine to drive a diaphragm type fuel pump and an electric tachometer generator.

Gearbox
Norton motorcycle 4-speed and clutch with the foot change lever altered to hand control on the right hand side of the cockpit.

Front Axle
The front wheels are independently mounted on transverse wishbones with their inboard ends attached to brackets on the chassis box. The outer ends of the wishbones are connected to a full length fabricated king pin member with universal swivelling ends. Suspension is by ‘bungee cord’. Rotary friction dampers are fitted to the upper inboard wishbone pivot shafts. Drive is through splined shafts and Holden universals to the front wheels.

Rear Axle
The rear axle is a beam type of high tensile steel tube with the hubs mounted on two radial ball bearings at each end. It is located on the centreline of the chassis at the rear in ‘De Dion’ fashion, with the mounting free to pivot or slide vertically. The outer ends of the axle are located by fore and aft torque members whidh are attached to the chassis at their front ends. Suspension is by ‘bungee cord’ and steel cable mounted on aircraft control pulleys. ‘Hartford’ type dampers are fitted on each side.

Steering
From the steering arms on the king pins, divided tie rods with swivel ends are attached to a verticlly pivoted sector shaft mounted on the chassis centreline. From the sector shaft, aircraft steel cables run back through a series of cable pulleys to a drum mounted on the lower end of the steering column with an intermediate pulley system to give a gear reduction. Prior to this system the car was fitted with a hanlebar type steering.

Brakes
Disc brakes are fitted front and rear and these were designed by Maurie as a result of his experience working on the braking system of the ‘Winjeel’ trainer aircraft.
Two master cylinders are fitted (BMC), one for the front and one for the reat and are interconnected to give proportional braking.
In addition to the foot pedal, a hand lever on the left side of the cockpit allows the brakes to be applied by means of a ‘Bowden’ cable operating on both cylinders. (Note: Triple pot cylinders on front discs)

Wheels
Normal motorcycle rims spoked directly to the hubs which were also home made.
History wanted
Anyone who might have any memories or early photos of the WGM and its constructors, please contact Motormaques.com or Martin Stubbs at This email address is being protected from spambots. You need JavaScript enabled to view it.