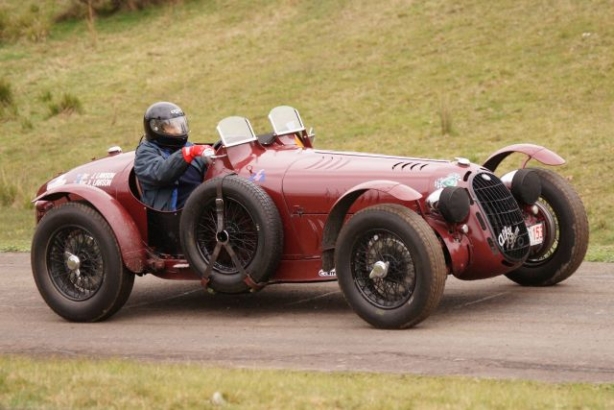 Motormarques talks to John LawsonRob Roy August  19, 2012.
John Lawson was kind enough to let me have a leaflet explaining some of the details of the car, explaining that it is a 6C 2300 Mille Miglia Alfa Romeo, with a 2.3 litre supercharged engine running with 7.5 lbs of boost and producing 180-190 brake horsepower.  It was clocked at 204.6 km/h during an event in Newfoundland.

MM: Do you mind if I have a word with you?

MM: This is a fabulous car.  How long have you had it?

JL: Thirty something years.  I bought it in the Argentine. (Revs the engine) It has a 2.3 litre engine.  190 brake horsepower.

MM: You have taken this car just about everywhere in the world.

JL: We have done 80 00km in competition, and raced it on four continents. We have been in 19 Targa-style competition events.  We have een on the podium 17 times, with 13 outrights, and it hasn't had been beaten in any of the Targa events.  In 2001 the clutch slipped, and we came third.

MM: -- explains about Motormarques. It is a catalogue and a who's who of classic cars and owners, with whatever histories we can obtain, and a coverage of events where the cars are displayed.

The Alfa Romeo 8C first appeared in 1931, with a 2336 cc engine producing 142 brake horsepower at 5000 rpm.  In its first form its radiator was somewhat square.  In the 1938 version the
Mille Miglia car's radiator shell was more oval-shaped.

A Tipo 6C was imported into Austrlia in 1928 by the father of A.N (Lex) Davison who acquired it in 1946. Lex had it rebuilt as a sports car which he successfully raced at Ballarat and at Rob Roy hillclimb. It was then supercharged and resumed racing in 1950 retiring in 1952.
Tweet