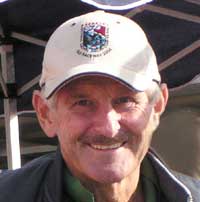 Dick Willis gives us an insight into his life as a racing driver of some of Australia's greatest historic cars.
Richard George (Dick) Willis  (Australia)

Married to Joan since 1973, 4 children ; mine/hers/ours.
Left school at 15 to become a fitting and machining apprentice with local engineering establishment, then worked at an engine reconditioning/speed equipment shop, then motor mechanic, mainly at BMC dealerships, including a stint at BMC Sydney as an experimental technician. Back to Coffs Harbour to work in the family business, banana growing, then worked for the newly established (1970) Datsun dealer, an old friend, as a used car salesman. Shortly afterwards was offered a 1/3 share in the business, which wasn't worth much then, but built it up through the good early years of Japanese cars in Australia. In 1980 was able to buy out partners quite reasonably and stayed there until selling the business in 1988, but keeping the 3 properties which were rented to the new owner who went broke 3 years later so back to work again as a used car dealer for another seven years.
Meanwhile, after selling out in 1988 had bought a cattle property near Coffs, having had several other smaller properties over the years, to pursue another great love, beef cattle raising, which is still now my "official" occupation.

Was fascinated by motor cars from an early age, drawing them, looking at them, asking questions until in 1949 discovering a magazine called " The Australian Motor Manual " in a newsagency, immediately hooked and bought every issue of it for the next 20 years and also every other motor magazine as new ones came onto the market, but in later years concentrated on those more orientated towards those fascinating older cars and particularly old racing cars. Still have them all, and still buying the relevant ones as well as interesting books on the same subject, occupying a huge downstairs room, but they have become a fantastically useful source of information for my later areas of interest. I am thankful that I did not succumb to desires of others to " throw all that old rubbish away." Only problem is I need to devise a system to save searching through so many books/magazines to find a particular subject.

All this reading naturally led to a desire to participate in motor sport after having spent considerable time and money trying to extract some performance out of the FC Holden, so the first event was a hillclimb at Kempsey in 1961, then followed many more sprints and hillclimbs, mainly on the North Coast, although some State rounds as well as Australian Championships have been on the agenda, in a variety of cars right up the present. Naturally it was only a matter of time before racing beckoned, Lowood in September, 1962, was the first race meeting and then several meetings at newly opened Lakeside, until the rust started to catch up with the faithful old FX Holden which had become the racing car as opposed to the FC which became the tow car. See photo of an FX Holden which is held in the Echuca Holden Museum.  Click on the image below to enlarge 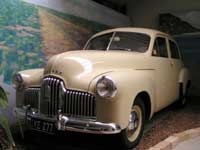 The plan was to put the mechanicals into one of the newly released Milano GT body/chassis kits, but instead the project received one of the then new (late 1963) 179 Holden engines. The result was a stunning car, king of the hills in Northern NSW and second only to the legendary AC Cobra of Thorp in the Sports Car section of the NSW Championships in 1966.The Milano was then sold to South Australia and its creator retreated again to the North Coast hillclimbs, also running at Bathurst in 1969 in a Mini K. However, a new challenge soon emerged, Speedway Saloon Cars. Being a Datsun dealer, the choice was easy, a Datsun 1600, and over the next seven years three of these were raced as well as a GT Falcon and XU1 Torana, but the 1600's were the favourites winning a couple of Club Championships as well as numerous races Grafton, Lismore and Uralla.

Meanwhile, another long term interest had been fulfilled in the mid seventies when an old friend arrived wanting to sell his Crested Eagle Alvis, which was the start of a collection of mainly British cars such as the Alvis, a Lagonda, a Riley, several MGs, two Lea Francis, an Austin Seven etc. and vintage car club activities became a popular pastime. By this time the first Amaroo Historic meetings had been held and then in 1978 the Oran Park circuit was used instead, and this proved to be the catalyst for another Willis passion, Historic Racing, this is for me! A suitable car was sought, and with memories of racing Holdens, it had to be Holden powered and eventually the Sharp Holden was bought and racing started, but not before a few outings at Amaroo and Lakeside in the Riley Nine to get the feel of things. Eventually most of the vintage cars went, mostly before they reached the dizzy values of the late eighties, in favour of other Historic racing cars and over the next 25 years some 17 cars have been raced in Historic events with quite some success. Currently we still have half a dozen Historic race cars and a couple of vintage type cars and have to be considered fortunate to have been able to enjoy this variety of cars and events over so many years, but perhaps it is some reward for the many years of hard work and dedication and going without many of the luxuries other people take for granted, and, of course having an understanding wife is a great bonus!

At this stage the "disease" shows no signs of abating, despite attempts by many over the years to enforce distractions and I am hopeful of being able to continue my present fields of interest for many years to come.

Projects for 2005 include completion of the restoration of Lynx 103, the first water cooled Lynx, continuing the task of rejuvenating the pre 1960 class in Historic racing as the HSRCA's Group L Registrar and keeping six racing cars in operating order while racing and hillclimbing them at every convenient opportunity.

For more information about Dick Willis' stable of cars - click any one of the following Marques  that are shown in the Motormarques site under the heading Marques:
Lynx 103
Brabham BT 36
Gladiator
Whatmore Special
Ausper T2 Formula Junior Srewart MG - The Wheeler Fortune