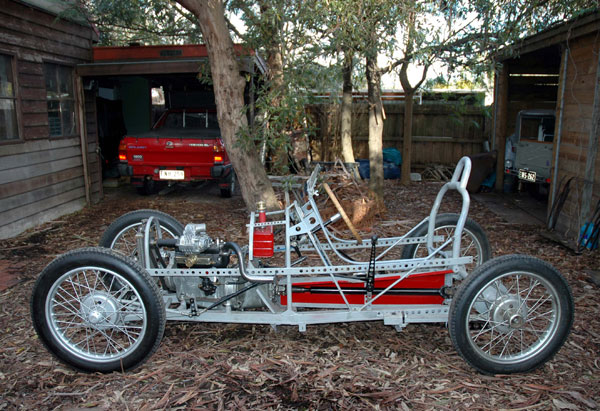 
Austin 7 racing enthusiasts are lucky in Australia, and in
particular,in Victoria where we have a range of expert automotive
engineers who have been involved in the building Austin 7s racing
cars for local and overseas challenges for many years. Bob Booth
along with Bill Morling and Jim Wilde were responsible for the design
and construction of three of the 1981 ‘Raid’ cars for Tony Johns,
Graeme Steinfort and Max Foster. Richard Stanley built the bodies
using a photo of a Grand Prix Bugatti on a workshop wall, as the
inspiration for their final shape. These cars and two others went over
to the UK and “set the cat amongst the pigeons” as they say but that
is another story.
So when any of us hear that someone is building another racing car,
our interest is immediately aroused as to what form the new car will
take.

Although I originally conceived this ‘series’ as articles about older
cars, I now feel that this could be some what limiting and that visitors
to ‘Motormarques’ will forgive me for a occasional deviation.

My need to have some machining done on a brake drum was an
opportunity to visit Bob at his workshop and view progress on his
new creation.

Conceived purely as a single-seat sprint car with the general
appearance of the 1933 ‘Jamieson’ side-valve, it is very much a
synthesis of Bob’s many years of engineering experience, which
is being carried out to the highest standards of workmanship
and skill.
DESIGN DETAILS