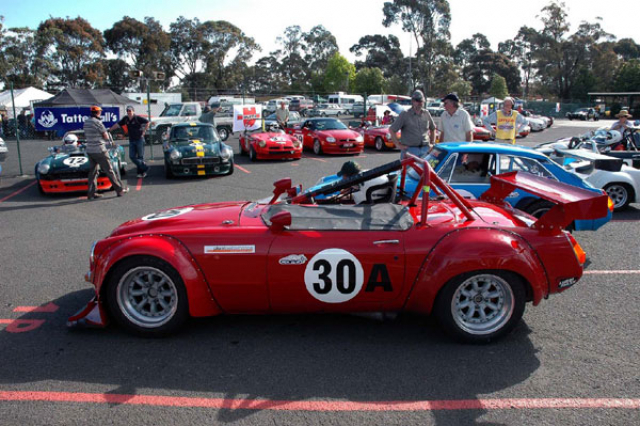 As you enter the gates to the pit area for this annual event, you walk into a kaleidoscope of colours, shapes and sounds, a rich array of different marques representing motorsport from the 20s through to a 2005 Westfield Clubman. Each year Historic Sandown seems to attract over 300 entries, not only past competitors but always a crop of new ones to avoid repetition and to keep stimulating public interest.
The feature event was ‘Return of the Thunder’, Australia verses New Zealand Formula 5000 clash consisting of 19 entries, providing spectators in the grandstand with a ‘wall of sound’ from the stock block 5.0 litre V8 engines as they swept past. In the last few years there has been a revival of the Formula 5000 Tasman series racing in new Zealand and Australia, and we can only be grateful for the dedication of the owners of these cars in still competing at a top level at what must be considerable cost of maintenance and with enthusiasm to keep these ageing cars running. Another feature was the display of Cooper cars on the concourse between the pits and the grandstand, these included a number John Goss, the only driver to win both Bathurst and the Australian Grand Prix was this years Historic Sandown Patron and as well as doing some of the presentations he also did a couple of demonstration laps in one of the restored Jaguar XJS racers.
Tweet
View the embedded image gallery online at:
https://www.motormarques.com/news/melbourne-desk/item/164-sandown-historic-meeting-%EF%BF%BD%EF%BF%BD%EF%BF%BDreturn-of-the-thunder%EF%BF%BD%EF%BF%BD%EF%BF%BD#sigProIdfd4cef3287