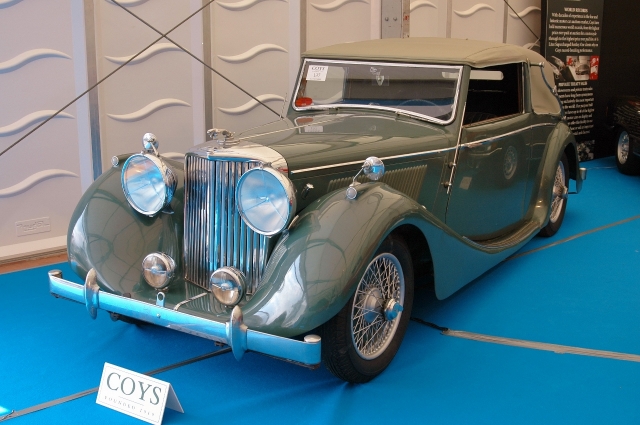 International auctioneers Coys showed over 70 classic and sports cars in their big hospitality tent. The auction on Saturday afternoon has become a long-standing feature at the Oldtimer Grand Prix. The auction featured a wide variety of vehicles such as Lancias, Ferraris, Porsches, Formula 1 cars and even some microcars.
One of the first lots was a 1985 one owner Mercedes-Benz 380 SL, with just one owner and 2574 kilometres on the clock from new and a Dutch registration. This car, presented in metallic dark brown with a tan hide interior, a brown hood and the factory hard top, was part of a private collection. The guide estimate was € 60,000-70,000, it went for € 63,000.

An American Special on offer was the Cozzi bodied Jaguar XK 150 SWB. This car was commissioned, built and driven by Dean Cozzi, an American who designed some special bodied Jaguars. The body is made out of fibreglass and built on a XK150 chassis. The Cozzi Special remained in the USA until 2003 when Mr Wilson Wittmire bought the car in Scotland in barnfind condition, and sold the car again to Mr Richard Meadows. After Meadows the car went to a Mr Rattenbacner of Austria and then to Mr Egmondt Wimmder who bought the car just to use the chassis for his XK 150 body. On this occasion he discovered that the chassis was a SWB because the body was too long for it. The current owner bought the car directly from Mr Wimmder. Estimated price was: € 100,000-140,000. The car didn’t sell at € 65,000.

A white, race worthy Fiat Abarth 695 SS, with a stripped out interior with a bucket seat, wide wheels and fitted with a roll cage was sold for € 28,750.

Four Lancias were for sale, a 1957 Lancia Aurelia B20 GT, delivered new to Sweden, a mere six-owner car sold well for €131,200 as the estimated price was € 100,000-130,000. Another beautiful Lancia was a 1964 Flaminia GTL 2.8 - 3 C Superleggera Coupe by Touring, one of just 303 produced. Having spent the majority of its life in Italy until 2012, it was then exported to Austria. Recently the car was resprayed in its original colour, but special care was taken to preserve its patination. Bearing still its original leather interior and carpeting, the car made € 71,800.
An unusual Lancia was the replica of a Fulvia Barchetta F&M Special. F&M stands for Fiorio & Maglioli, the names of the team manager and driver of the official works Lancia team respectively. This car was specially designed for the 1969 Targa Florio as the original cars couldn’t compete against the other, more powerful cars. From a Fulvia HF, the roof was cut off and the chassis was shortened by 28mm. The body was stiffened up with rigid tubular framework and everything superfluous taken off the car, resulting in a weight reduction of 200 kilograms. Three such cars were built and the car at the auction was a faithful reproduction of the original car. The basic car was a 1968 Fulvia 1.3 Rallye, which was transformed into this F&M Special and the engine is from a 1600 HF, just like the authentic car. It has had three owners from new and is now fully prepared for track work. The car was prepared and restored in 2011 following the continual advice of former Lancia team boss and constructor of the original car, Claudio Maglioli. Race prepared including all the FIA-paperwork it was estimated at € 35,000-45,000, and was sold for € 36,800.

A very tidy, Italian registered 1990 Lancia Delta 2-litre 16v Integrale, went cheap for € 19,950. A stunning 1972 Alfa Romeo Junior Zagato, first registered in March 1972, was sold for € 48.300, a fair price considering an extensive restoration in 2004 where the body work was stripped back to bare metal and repainted, many new parts were fitted, and the car uprated to 2.0 specification. Since its restoration, the car had covered only a few hundred miles.

The most expensive Ferrari F40 ever, swapped hands at the Nürburgring. Being a one owner car, Italian registered, with just 7881 kms on the clock, this 1992 F40 was one of the last produced and had been stored in a climate controlled garage and hadn’t been driven since 2010. It was serviced in July 2015 and the car was also inspected by Ferrari Classische and now awaiting its Certificate which was included in the sale. The F40 was sold to a delighted German buyer who was applauded by the crowd in the auction tent. Besides the amount of € 1,102,500 for the F40 he also bought the white 1971 Lamborghini Espada standing next to the Ferrari, for € 142,200.

The 1955 Mercedes-Benz 220 A Ponton by Pollmann was a barn find and one of only eleven cars built by the coachbuilder Pollmann of Bremen, who still exist today. Being a hearse, the car had only two owners in sixty years of which the last owner used it until July 1976. Requiring a full restoration this car was sold for € 10,350.

Built by the Porsche Competition department to contest the world's longest ever rally, the 30,000 kilometre London-Sydney Marathon, the 1976 Porsche 911 Carrera drew a lot of attention. The special modifications for the start of the rally were body-stiffening, extra strong suspension, a distinctive roof rack and roof mounted oil cooler, competition engine and transmission modifications, long range competition tank, and “kangaroo proof” cables which protected the windscreen from wildlife in Australia. After such a punishing rally, which was a testament to the car's overall strength, Porsche Australia deemed the car still to have plenty of life left in it and purchased it for competition purposes, the car competed in the 1979 Repco Rally, where it was seeded number 1. Later it raced around Australia off-road twice more, including in Paris Dakar specification with a Porsche works 953 3.2-litre Paris Dakar engine and running gear. Since being purchased by the current owner, the car has been used in anger as intended and is perhaps most famous as the car which took rallying first World Champion Bjorn Waldegard back to Africa after 15 years away to compete on the East African Safari Rally. The car presents today the authentic Martini livery, as it did when driven in Africa. Coys described the car as ‘unstoppable on any road conditions or terrain.’ Estimated at € 400,000-475,000, the highest bid was a disappointing € 400,000, so the car was a non-seller.
Other Porsches were a 1978, 911 3.3 Turbo, also wearing Martini livery (estimated price: € 85,000-100,000) sold for € 90,500, and an ex Carrera Panamericana, 1965 911 short-wheelbase. The latter was expected to reach € 180,000-220,000 and made € 180,700. A road car, but fully equipped for racing, was a 1973 Porsche 911 Carrera 2.7 RS. It was listed as one of the first 500 examples built to meet the FIA’s homologation requirements for the 1973 GT Championship season. To indicate the rising demand for these early Rennsport versions, the bidding climbed up to a staggering € 580,000 but it didn’t reach the estimated value of € 650,000-850,000.

Two Formula One cars sold well, the 1982 Arrows F1 A4-3 was registered in 15 races during the 1982 F1 championship and won 5 points, as the result of one fifth prize at Canadian GP with Marc Surer, two sixth prizes with Mauro Baldi, one sixth prize with Marc Surer. The type A4 is currently one of the most competitive cars in the Historic F1 Championship. The car came with a just serviced Cosworth engine, with only 2 test drives on the circuit. Estimated at € 300,000-400,000, the car was sold for € 350,100. The other F1 was a 1980 Lotus 81, during 1980/1981 it was campaigned by world class drivers Mario Andretti, Elio de Angelis and Nigel Mansell. After its racing career, 81-02 remained with Lotus and was later sold to swiss Lotus dealer Freddy Kumschick. The current owner purchased the car in 2007 and had it completely rebuilt at a cost of €150,000. Since then, the car has been driven sporadically at the TGP and Masters. 81-02 bears the correct Cosworth DFV longstroke engine, which has been completely rebuilt by well know UK specialist Richardson. This car was absolutely on the button and race ready. Estimated at € 325,000-375,000, the car found a new owner for € 349,000.

Lot 115 was a 1973 Ford Capri 2.8 Group 2, originally used from new as a race-car by the Ford Dealer in Hamburg, Germany. After a couple of years the car was converted to road legal condition. The Capri was brought to Italy in 1996 and was used in its road form for a couple of seasons for regularity trials and the occasional track day. In 1998 the car was brought back to the original Group 2 condition. The car is still in a fantastic condition with a very fresh 210-hp engine and transmission, rear disc brakes, inox exhaust system, lightweight engine bonnet and plexiglass side and rear windows. Including many spare parts the Capri was estimated at € 35,000-50,000. The bidding reached € 35,000 but Coys auctioneerChris Routledge told the audience “I’m afraid I can’t sell it for that money, please visit us afterwards..”

*The mentioned prices of the sold cars include the buyer premium