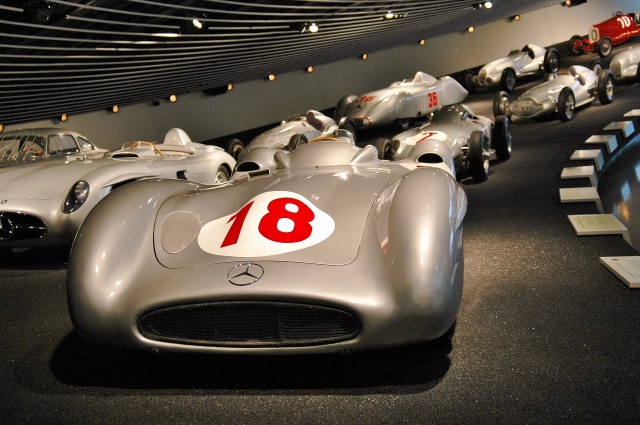 Mercedes-Benz has more history than any other automobile manufacturer. Mercedes-Benz is headquartered in Stuttgart, Germany, where the main production facilities are located. Their museum is also located in Stuttgart and it should be on every car enthusiast's bucket list.
The museum itself is an architectural marvel, designed by the Dutch firm UNStudio van Berkel & Bos.
Even before visitors have entered the building, it makes already a huge impression. Built over the course of three years, the shape of the museum is almost cylindrical and has 9 levels.The structure itself is based on a unique cloverleaf concept using three overlapping circles with the centre removed to form a triangular atrium. There are no closed rooms or straight walls, and its 1800 triangular window panes each have a unique shape unmatched by any other piece of glass in the building. Opened in May 2006, both the architecture and the exhibition concept are closely interwoven. Transporting you to a height of 34 metres, the museum lift will take you on a journey back in time – to the year 1886. In the lift visitors hear the sound of horse's hooves before meeting a preserved horse that serves as a reminder of personal transport before cars. Here the tour begins, the pioneering inventions of Gottlieb Daimler and Carl Benz.

On January 29 1886, Karl Benz applied for a patent for his “vehicle powered by a gas engine”. That patent (number 37,435) is generally regarded as the birth certificate of the car. The first car to be seen is a replica is of the Benz patent motor car, a three-wheeled, 0.55kW strong car. Of the 160 exhibited vehicles, just a handful are replicas.
In 1886 Daimler and his lifelong business partner Hilhelm Maybach designed a precursor of the modern petrol engine which they fitted to a two-wheeler and so the first motorcycle was born. Daimler called the engine the grandfather clock engine because of its resemblance to a large pendulum clock. In 1890, Maybach and Daimler founded the Daimler Motoren Gesellschaft. They sold their first automobile in 1892. In 1900 Daimler died and Wilhelm Maybach left the company in 1907. The Benz-symbol was entered as a trademark on 10 October 1910.

Daimler-Motoren-Gesellschaft had already applied for legal protection for the Mercedes-Benz star in June 1909. It was entered as a trademark in February 1911.
The fact that both automakers almost simultaneously registered their trademark seems almost a reflection of their hard work to develop the internal combustion engine. That was almost in the same year without any knowledge of each other's efforts.

Benz cars tended to be a bit more conservative and, although with models such as the 'Blitzen' Benz they did achieve some early race and record-setting success, it was Mercedes that became the most prominent in early Grands Prix and the famous Gordon Bennett races.

By the 1920s the prevailing economic conditions made business hard for both companies, despite their cars earning strong reputations for quality and, in the case of Mercedes with the S, SS and SSK models (designed by Ferdinand Porsche), in competition. In 1924, the Daimler management signed a long term co-operation agreement with Karl Benz and in 1926 the two companies merged to become Daimler-Benz, which is now part of Daimler.