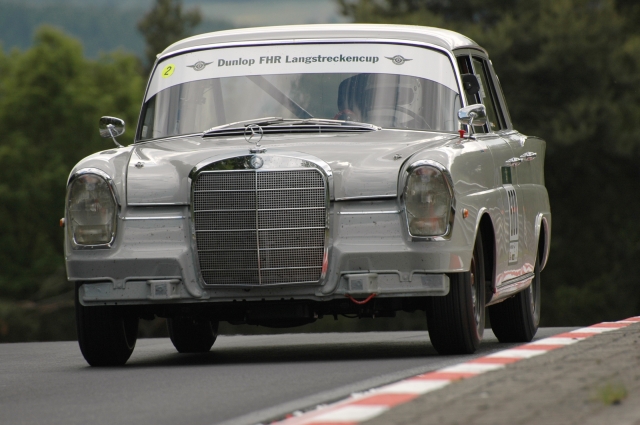 Three times three – it's the success formula of the three-hour race of the Historic Trophy Nürburgring. Three racing series start together on Saturday afternoon for a 180 minutes race on the Grand-Prix circuit and the Nordschleife of the Nürburgring. The equipes from approximately 150 historic touring cars and GT cars from the Dunlop FHR Long Distance Cup, Trophy and Triumph classic cars Competition & British GTs will not only compete against each-other in their own competition field but also against the cars the other two series. The pilots know that not only their lap times are critical - also with the right strategy and a good pitcrew are essential to finish this race. What is needed is the right mix of speed and consistency, so the combination of full commitment and gentle handling of the material is essential. A special highlight for the spectators is that they can visit the starting grid just before the start of the race.
Dunlop FHR Long Distance Cup
The key data of Dunlop FHR Long Distance Cup 2014: Seven races for historic touring cars, GTs and two-seater racing cars built between 1946 and 1971. In The Dunlop FHR Long Distance Cup no modifications or modern technologies are allowed which could increase the car's performance or road-holding. More than 50 teams registered themselves for this race.
49 cars started the race and again the Porsches 911 proved to fast and reliable, Germans Stefan Oberdörster and Andreas Gülden won the race 26 seconds ahead of the 911 driven by the Germans Kersten Jodexnis and Oliver Mathai. Two minutes later the BMW 2002, driven by the ladies Gaby von Oppenheim and Claudia Hürtgen, past the chequered flag. 16 teams didn't finish the race.

Youngtimer Trophy
The Youngtimer Trophy was created in 1993 by the Germans Egon Meurer and Hans Schnock, realizing their own ideas of a younger historical motor sport. The vehicles of the homologation-years 1966 to 1976 were too young to be entered in a historic touring car race but already belonged to motorsport history. In 1993 it all started with just 35 cars on the grid but in 1994 there were already more than 70 cars from the late 60's and 70's. Technically and visually the vehicles have to be prepared according to their original specification. From 1997, sometimes more than 200 teams registered themselves for a racing-season. Currently the Young Timer Trophy is divided into four groups by year of construction (built from 1966-1971, 1972-975, 1976-1981 and 1982-1988). To promote the Young Timer Trophy, the participants of the groups of 1 and 3 to 1300 cc of cubic capacity as well as all vehicles of the period 1966-1971 are supported. They are entitled to a reduction of 25% of the regular entry fee.

Battle of Dwarfs
The small passenger-cars of the 60s and 70s have an extensive motorsport history.
The battle of the dwarfs started more than 10 years ago to provide a race-series which was affordable for the unsponsored racing-driver. Three race-classes were brought together into the Battle of Dwarfs, the "Abarth Coppa Mille", the "British Car Trophy" and the "NSU TT Trophy". Since 2012 the "1300 Histo Cup" has been added to the Battle of Dwarfs. The result is an impressive starting field with at least 50 cars on the starting-grid. Every race weekend consists of two regularity runs. So the fastest car in practice isn't necessarily the car that has the greatest chance to win the race.
The British Car Trophy is divided into Group1 and Group 2 cars.
Group 1 is a starting class, it gives maximum fun at low running costs. Only Minis built between 92-96 with single point injection are permitted. It is possible to build competitive race-ready car for around 6,000 Euros. The engine block and the cylinder head must conform to the original factory specifications. The maximum displacement of the engine is 1293cc. The total vehicle weight after training or race including driver must at least 745Kg (not including fuel). Lowering suspension kits are allowed. Series alloy wheels dimension of 4.5 "x 12" are mandatory and road tyres from Yokohama in size 165/60/12 are prescribed.
Group 2 cars in the British Car Trophy are improved Mini's or English vehicles (touring class and GTs) with an Austin/Morris A or A+ engine up to and including 1380cc. Main bearing blocks, crankshaft, pistons, camshaft and connecting rods are free. The flywheel and clutch system are free. Cross-flow heads, 7-channel or 8-channel heads are not permitted. Carburetors are free of choice including the mixture preparation, air supply and air filters. Compressors or turbo's are of course not allowed. The exhaust system including manifold is free of choice, providing it meets the prescribed noise limit (recommended 95 dBA). Wheels and tires are free, however the rim size should not exceed 8 x 13 inches. The vehicle's weight after training or race including driver must at least 640 Kg (not including fuel). Overall winner of the two regularity runs was Dutchman Hans van Beem in a Steyr-Puch 650 TR followed by the Autobianchi A112 driven by Lothar Kahl. Winner of the British Car Trophy (and seventh overall) was Herbert Wein in a Mini Cooper S. Fastest car during both runs was the Fiat-Abarth 1000 TC driven by Ingmar Koschnik, watch the YouTube videoclip !

Classic Sidecar Cup
Sidecar racing has always been popular for both riders and spectators since its inception. It is one of few motorized sports where two people combine to drive and balance the vehicle in motion. Sidecars do not handle like any other motorized vehicle and there are special skills required. Preparation by the passenger for each circuit is as important as preparing the machine. He or she must concentrate on moving around the platform in a smooth flowing manner so as not to make the sidecar move around unnecessarily, which is very important when on-track at speed. Sidecars have the ability to corner faster in one direction than they do in the other, depending on which side the sidecar is placed. 18 equippes were competing this weekend at the Nürburgring. BMWs were in the majority; several Japanese bikes entered the two races but most surprisingly were the three Moto Guzzi sidecars. The Honda's were fastest during practice but both races were won by the Moto Guzzi spectacularly driven by German Achim Kindermann and passenger Stephan Kokott.                                Text and photos by Guus Docen