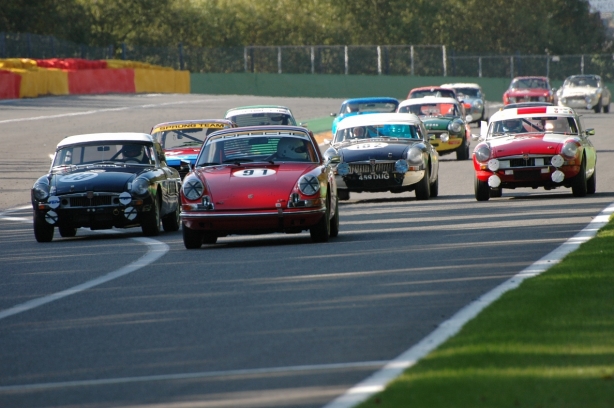 The 20th edition of the Spa Six Hours weekend was like every year before, a most impressive event with more than 600 cars and more than 1000 drivers. Within the circles of the classic racing scene this event is highly praised and it has become a fixed date in many racers agendas. It’s a rare opportunity for the owners of pre-1965 GT and Touring cars to run their cars over a longer distance and into the night. Not only the cars are forced to their limits but also the drivers !
Six Hours Race
103 cars and their driver teams were lined up in the paddocks to compete in the six hours endurance race starting at 4.00 pm. on Saturday. After the practice on Friday afternoon, as expected the fastest cars were not less than 8 Ford GT 40s, with the very fast Chevrolet Corvette Gran Sport of Michael Campagne/Allard Kalf in 7th position. Other front runners were two Cobras, several Jaguar E-Types and a TVR Griffith. Apart from these very fast American V8s and British straight-sixes there was a great diversity of entries like MG Bs, Porsche 911s, Austin Healeys 3000, Giulia GTAs, Lotus Elans and Triumph TR4s, Morgan Plus 8s, Ford Mustangs, Marcos 1800GT, 2 Mini Coopers, a Ginetta G4 and even a Ferrari 250 SWB.

From the rolling start the GT40s immediately streaked away but they couldn’t shake off the cream colored Corvette Gran Sport which stormed into third position even before reaching Les Combes at the back of the track. During the second lap The Dutch Corvette passed the GT40s driven by the equippes Voyazides/Hadfield and Kjallgren/Littlejohn/Nearburg. During the first hour the Corvette led from Voyazides/Hadfield and four more GT40s but by the second hour the dark green Roger Wills/Brendan Hartley GT40 held the lead, with Voyazides/Hadfield retaining 2nd and the big ’Vette now in 3rd position. It was a very disappointing race for the  former winners of this race John and Jason Minshaw and Marc Stretton as the petrol tank  of the beautiful Jaguar E-Type ripped open. Even worse was the incident where New Zealander Chris Chiles’ Cobra lost its rear wheel after 27 laps coming out of the les Combes corner at full speed. The car spun into the guardrail and was on the edge of the tarmac as there’s almost no green lane at this point. Fortunately all the following cars were able to pass without crashing into the wreck. The Ford GT40 of the team Kjallgren, Littlejohn and Nearburg lost their passenger door, their pitcrew were able to make a temporary repair by taping off the open entry.

Despite these problems they finished a respectable 13th. After three hours the Shelby Mustangs, AC Cobras and E-types mixed it with the front-runners. After four hours the leaders were Wills/Hartley in their GT40 and second were Sean Lynn/Emanuele Pirro in ‘Tessie’ - the pale blue GT40 (a previous victor). In third position were Voyazides/Hadfield in the red GT40. But very soon a determined Simon Hadfield overhauled ‘Tessie’. After the last fuelstop Simon and Leo were driving their car flat out, and in lap 85 they were just 40 seconds behind  the Wills/Hartley GT40 reducing the time to 21 seconds in lap 100.

With just 15 minutes to go, frontrunners Wills/Hartley ran out of petrol and they had to enter the pits and so Voyazides/Hadfield forged on to take the chequered flag at 10.00pm. Lynn/Pirro came a well-deserved 2nd, and the podium was completed by the Corvette Grand Sport of Campagne/Kalff.

Masters Sportscars
The Master Sports Cars was run over a full hour on Sunday and featured 10 Lola T70s, 7 Chevron B8s, 4 Chevron B16s, 3 McLaren M1cs, several Lolas and the icing on the cake Paul Knapfields Ferrari 512M and Carlos Monteverdes Porsche 917. The race was won by historic car dealer Gregor Fisken and historic car racer Peter Hardman in a McLaren M1C. On pole position was the Lola T70 Mk3B driven by David Coplowe/Martin Stretton, second was the 4 cyl. Chevron B8 driven by Sandy Watson/Martin O’Connell. After the start Coplowe dropped back to 12th position, when Martin Stretton took over he stormed through the field and finished in third position. New Zealanders Roger Wills and Brandon Hartley won this race in their McLaren M1c, ahead of the similar car driven by Gregor Fisken/Peter Hardman.


The Woodcote & Stirling Moss Trophy
The Woodcote & Stirling Moss Trophy is run by the organisation Motor Racing Legends. The Woodcote Trophy is announced for Sports Cars built before 1955 and the Stirling Moss Trophy for those before 1961. In classes divided by the engine capacity up to 2 litre, between 2 and 3 litre and above for drum and disc brakes models. Several Jaguar C- and D-Types were entered for this race but also 4 Lister Knobblies,  4 Frazer Nashes, 8 Aston Martins (DB2 and DB3), Austin Healey 100, Maserati 250S and 300S. In the Stirling Moss Trophy Kiwis Roger Wills and Brandon Hartley were again quickest in the nimble Lotus 15. Second was the Maserati T61 Birdcage driven by Jason and Alan Minshaw. In the Woodcote Trophy Gary Pearson had qualified Brazilian driver Carlos Monterverde’s white Jaguar D-Type as 13th quickest in the 53-car field. During the one hour race a stunning battle lasting more than 18 laps evolved between Monteverde’s D-Type and the Cooper-Jaguar T38 driven by the equippe Patrick Blakeney-Edwards and his American team-mate, Fred Wakeman. Pearson jumped aboard Monteverde’s D-type, but couldn’t shake off the tenacious Blakeney-Edwards who remained in his mirrors throughout. “We’ll have to fix that brake pedal,” said PB-E to Wakeman on the rostrum, after a very promising second outing in the Cooper. When the chequered flag fell there was just 3.27 seconds between winners Pearson/Monteverde and  Blakeney-Edwards/Wakeman.


Middle Row:       The Corvette Grand Sport finished third in the Six Hours race
Morgan 4/4 and Ford Falcon duelling during the Six Hours
Von Oeynhausens Jaguar installing the engine after fixing the gearbox
Alfa Romeo Tubolare Zagato driven as it should