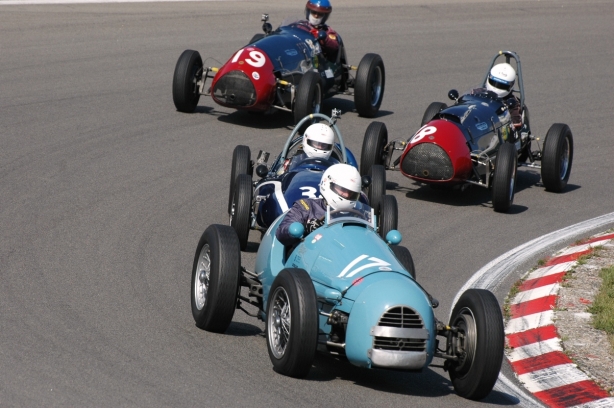 
Sports Racing Masters
The Sports Racing Masters race, had a disappointingly low entry, which seemed to imply that many competitors were saving their cars for the Goodwood Revival. Again David Hart showed to be an excellent racing-driver with the advantage of knowing every square meter of the track. Hart won both races in his Lola T70 Spyder. Interesting was the battle for fourth place between Hans Hugenholtz in his Racing Team Holland Ford GT40 and Marcus Mussa’s McLaren M1B. The blue GT40 car with the familiar bubble in the roof – to accommodate Hugenholtz’s head – won out at the end. Sadly, Marcus collided with Gareth Burnett (driving Adrian van der Kroft’s Merlyn MkIV) two laps before the end of the race and the Merlyn got stuck in the gravel. Mussa was disqualified for his involvement.