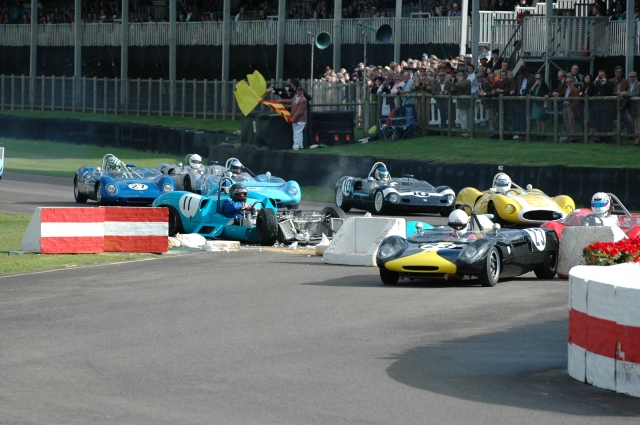 The Revival is one of two big motoring events hosted at the Goodwood estate each year and has now become one of the world's largest historic motor race meetings, reliving the heyday of the Goodwood Motor Circuit from 1948-66. The Revival is more than just a normal race meeting for historic/classic racing cars, it’s the classic motorsport equivalent of Royal Ascot. Spectators arrive in period clothing although dressing up is not a prerequisite but you will feel much more involved in the spirit of the event if you do. So arriving at the gate early in the morning the show already begins. Visitors are dressed in the 1920s fashion until the style of the sixties, it depends in which car one arrives or which era is ones most favourite. Men are dressed in sharp suits or khaki trousers and blazers, tweed jackets and matching flat cap or even a former army suit. Women wearing colourful long dresses and funny hats, pleated skirts, twin-sets-and-pearls, fur coats or even 1960s mini-skirts. To enter the paddock, there's a strict dress code, although the variety of styles and uniforms seen is fairly loose. Mechanics are dressed in plain white overalls and officials wear brown coats. For spectators arriving in their regular outfit there’s even the opportunity to buy all the vintage clothing at the more than 150 shops and stands on the Revival Market.
The Revival High Street takes you back to a former British main street, including a period Tesco supermarket. This Tesco's 1966 replica store features period-style products with authentic retro packaging. Dancers, bands, singers, and even Laurel & Hardy driving a model T Ford are present to entertain the crowd. It’s a big garden-party with the mixed sound of battling racing cars and flying Spitfire aircrafts. The choice is all yours if you want to watch the races or if you want to loaf around the course. Wherever possible, there's nothing later than 1966 and each year the attention to detail improves. There are simple waist-high wooden fences, the shuttle buses are period 1960s, as are the tow trucks (Land Rovers and Austin Gipsy’s). The entry tickets and passes are on old-style paper and even the fish and chips are wrapped in period newspaper.

A fantastic selection of rarely-seen pre-1966 aircrafts were on static display in the Freddie March Spirit of Aviation Concours, the giant 1944 Boeing B-17 Flying Fortress shared central attention with the Supermarine S6A float plane, a forerunner to the Spitfire, and a replica of the original Spitfire Prototype.

Goodwood always attracts famous drivers such as Jochen Mass, Emanuele Pirro, Martin Brundle, Gerhard Berger, Derek Bell, Mario Franchitti, Stig Blomqvist, Andy Wallace, Tiff Needell, Tom Kristensen, Vern Schuppan, and Richard Attwood, to name but a few.  Most of them are invited by car-owners to compete in one of the races. Also celebrities were spotted in the paddock likeCharlie Watts of the Rolling Stones, Nick Mason, Jay Kay, Murray Walker, and Ferrari-owning Chris Evans from the BBC.

The races
The first race was the Goodwood Trophy for Grand Prix and Voiturette cars that raced between 1930 and 1950. The race was won by Mac Hulbert in the ex Raymond Mays ERA R4D who had a battle with Julian Majzub (Alfa Romeo 308C) in wet conditions after a heavy downpour just before the race. The two both led and were never more than a couple of seconds apart.

In the Glover Trophy race for 1.5-litre Grand Prix and Tasman cars former works Nissan BTCC driver Andy Middlehurst dominated the race in his ex-Jim Clark Lotus 25. Already by the end of the first lap he was in front by 7.3-seconds and a staggering 30-seconds ahead at half-distance. The battle for second place was between Lord Drayson (Lotus-BRM 24),  Alan Baillie (Cooper-Ford), Dan Collins (Lotus-Climax 21), Mark Piercy (Lotus-Climax Mk.4) and Sid Hoole (Cooper-Climax T66). Drayson won this five-car battle while Collins understeered into the gravel trap at Lavant corner which allowed Baillie to take third spot at the flag.

The Richmond Trophy for 1950s Grand Prix cars was a wonderful chance to see a brace of Maserati 250Fs competing against Aston Martin DBR4s and the rare Lancia-Ferrari D50A owned by sir Anthony Bamford of JCB and driven by Alain de Cadanet. The race was won by Gary Pearson in a BRM Type 25, followed by Tony Smith in the lovely Ferrari 246 Dino.

One of the most thrilling races this weekend was the St Mary’s Trophy for 1960s saloon cars. A field of 28 cars of all sizes, three immense Ford Galaxies, several Lotus Cortinas, Alfa Romeos GTA, BMW 1800 TiSA, Mini Coopers and even a Mercedes-Benz 300SE. During qualifying on Friday James Wood was fastest in the 7-litre Ford Galaxy followed by Richard Shaw in a BMW 1800 TiSA, third on the grid was Nick Swift in a Mini Cooper S. In race 1 on Saturday the Galaxy was driven by Paul Radisich and Jacky Oliver drove the BMW. The Swift Mini was driven by Darren Turner. During the first three laps the BMW chased the Galaxy but finally the Galaxy took the chequered flag just 3.7 seconds in front of the BMW. Behind the BMW a 3-way dice started between Darren Turner, Anthony Reid in a Mark II Jaguar and Tom Kristensen in a Lotus-Cortina, all three of which were nudging for positions – literally – as the scars in the paddock afterwards bore witness !  Race 2 on Sunday Richard Shaw's BMW 1800 tore off to an insurmountable lead, but the crowd was thrilled by the battle for second and third place, fought by Woods mighty Galaxie and the highreving Swiftune Mini. Every lap on the straights the Galaxie drove away from the Mini but struggled to slow down and turn the corner, whilst the little Mini barely slowed down at all and nipped through on the inside with far better grip. Finally the Galaxie took second place just 2.7 seconds ahead of the Mini.

Sunday’s highlight was the RAC Tourist Trophy Celebration race for 1960s GT machines. In this one-hour, two-driver race the most valuable and rare closed-cockpit GT cars from 1960 to 1964 were competing. It was rumoured that the field of cars in this race was worth £100 million. From Ferrari 250 GTO, GT SWB and 330 LMB, to Aston Martin DB4GT Zagato and Shelby Cobras. This year  the Jag E-Types were absent because of the special race for E-Types, the Fordwater Trophy in which 30 cars were entered. A very special car present this year was Lawrence Auriana's Maserati 151/1, which had been part of the Rosso Bianco collection for many years and is the sole survivor of the three that were built. After an extensive restoration process, this was the machine's first competitive outing. It was driven by Joe Colosacco and Derek Hill, son of 1961 World Champion Phil. On a damp track, Kenny Brack started on pole in a Cobra Daytona Coupe he shared with Tom Kristensen. The Swede managed to create some distance between him and the rest of the field that was initially headed by Martin Brundle in Nick Mason's Ferrari 250 GTO. He was soon challenged by Hill in the big Maserati. Then the clouds burst open and the race was stopped for a few minutes due to the heavy rainfall. The overall victory went to Brack and Kristensen ahead of Brundle and Mark Hales and the two Americans in the Maserati 151/1.

The final race of this event on Sunday was the Sussex Trophy, a twenty-five minute race for world championship sports cars and production sports-racing cars of a type that raced from 1955 to 1960. Vintage tyre dealer Julian Majzub made a lightning start from the front row in his Sadler-Chevrolet but Alex Buncombe showed impressive car control on the damp track with his Lister-Jaguar ‘Costin’ and before the end of the first lap he had taken the lead and was never headed. Former touring car ace Anthony Reid moved into second place in a Jaguar D-Type ‘long nose’. On the second lap he was passed by Bobby Verdon-Roe’s Aston Martin DBR1. The top three positions remained unchanged to the finish.

This year 134,000 visitors from all over Europe came to Goodwood in their period costume to experience the unique atmosphere of an historic racing event like no other. What sets the Goodwood Revival apart is the degree of charm and humour that goes with it. Three days is just not enough to see and absorb everything that happens at this event. Racing aside, nobody takes it too seriously and everybody goes away at the end of the day with a huge smile on their face.