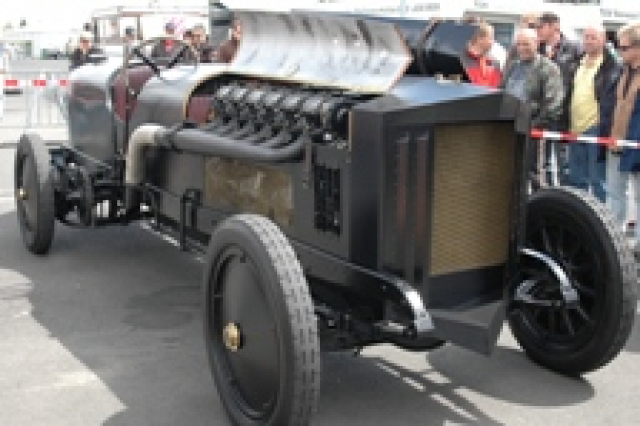 The International Oldtimer Festival – also known as Jan-Wellem-Pokal – is as classic as the cars competing at the legendary Nürburgring. This year the three day event celebrated its 25th anniversary from June 15th  to 17th. Friday and Saturday the weather was cloudy and rainy but Sunday was a beautiful sunny day. The programme included around ten different race series attracting more than 600 drivers  from various countries. Among the highlights are the historic motorbikes and sidecar bikes.The range of vehicles reaches from the classic De Dion Bouton GP built in 1908 to the high-tech Group C sports car Jaguar XJR16 from 1991. The International Oldtimer Festival features world-famous sports cars, classic touring cars and rare formula cars like the Tyrell P34 six-wheeler.  The demonstration runs for vintage cars featured more then 100 prewar motorcars like Bugattis, MG J2s, Rileys, Lagondas, Austin Sevens, BMWs and Veritas.
Two 500 cc Hanomags Kommisbrot (without bodywork) and three pre-war big Mercedes-Benz were poles apart. In the paddocks Protos and Brutus attracted a lot of attention. The Protos is a six cylinder 7 litre engined racing car built by the Siemens factory in Berlin in 1920. This car was lost for many years but it was discovered a couple of years ago in a Berlin cellar. Restored with much love and care this car was displayed in a museum until recently but from this year the car will be used for demonstration runs at historic car events.An undercarriage with chaindrive of 1908 was used as a basis for the Brutus replica-project.A BMW 46-litre V12 aircraft-engine with a constant performance of 500 hp at 1500 rpm. was located in Spain and mounted on top. The attraction of this vehicle lies in its impressive sound and massive torque and its ability to do 60 mph. at only 800 rpm !           An interesting race was  the “Kampf der Zwerge“ (Battle of Dwarfs). This mixed field of cars is in fact  the merger of three different race series, the Abarth-Coppa-Mille, British-Car-Trophy and NSU TT-Trophy. So on the starting grid were Mini Coopers, Mini-Marcos, Fiat Abarth 1000 TC, Autobianchi A 112 Abarth and Steyr Puchs 650TR (a fast Austrian version of the Fiat 500 with a 2 cylinder boxer engine). Not only the ambitious hobby-drivers got goose bumps when the 70 cars took off and reached the first right corner. It was really racing on the edge and an enjoyable race. Of all the three series the technical rules are relatively free (brakes and tires) but nevertheless these series are still affordable for the private-driver.Although the Group C/IMSA GTP Sportscars can’t even be considered as Youngtimers, this class forms a great attraction to the spectators because of the high speeds these cars can achieve.         Over 20 entries for this weekend with cars ranging from the Porsche 962 C, Jaguar XJR 11,12 and 16, Spice SE90C, Nissan NTP1 GTP to the 1988 Le Mans winning Mazda 757 (with a flame belching three-rotor wankel-engine sounding like an angry Tasmanian devil).Wolfgang Graf Berghe von Trips was a young German count who was offered his first F1 drive in a perhaps over-generous moment by Enzo Ferrari in the 1956 Italian Grand Prix where he crashed heavily. Shrugging aside his reputation as a crasher, he won the 1961 Dutch and British Grand Prix. Tragically, he collided with Jim Clark's Lotus at 1961 Monza Grand Prix and the Ferrari flipped up into the air and Von Trips got killed.In honour of this Formula One driver a German Championship was founded 26 years ago. In this championship Formula Ford 1600 and 2000, Formula V, Formula 3 and Formula Junior cars are  eligible. The difference in speed between some of these cars is substantial so the championship was split into two heats.Besides the Triumph/MG competition and a Formula 2 race a most important item was the Yokohama FHR Paragon Cup split into two heats. Forty-five well prepared touring cars and GTs like Alfa Giulias, GTAs, Porsches 911, Lotus Elan, Ford Escort and Mustang started late Saturday-afternoon on profiled tires as the track was soaking wet. Sunday-morning at eight the second heat of two hours was driven. Weather was fine now and overall winner was Team Zumtobel (Porsche 911).    Spectators and participants drove back home wearing their sunglasses thinking of a weekend with spectacular cars and enjoyable races without major accidents.
Tweet
Print Email
Rate this item
(0 votes)
Read 5924 times Last modified on Friday, 05 June 2020 14:06
« 35th Oldtimer Grand-Prix Nürburgring 10-12 August 2007  More in this category: ADAC Eifelrace um den Jan-Wellem-Pokal Nürburgring 8-10 June 2012 »