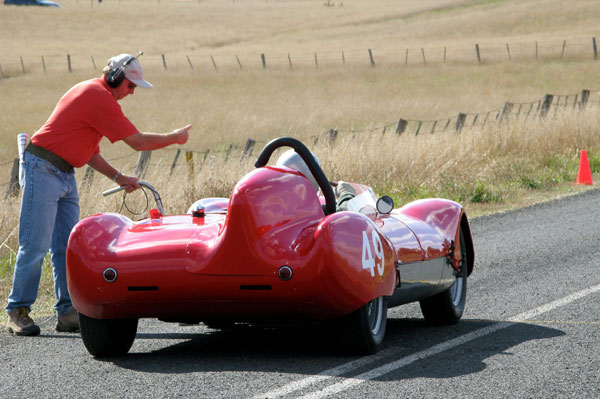 Unfortunately your contributor has been a bit slow off the mark this year, in fact some would say very. Having missed the Eddington Sprint, not having a suitable car, my Austin sports special is too low geared, and having only a three speed gearbox means you are up to top speed within the first 200 meters. So Myrniong Sprint was my first event and my first outing in the newly acquired 'Tyrell' Austin 7 racing car.
Despite an early start and problems with the tow car, we arrived in good time to allow for a leisurely unloading, only to be interupted by Max Robinson to wish us well and eager to see his old car (Max is one of the previous owners). Myrniong Sprint is held on a public road and the event only exists through the hard work put in by the members of the Austin 7 Club of Victoria. As usual they had slaved away the previous day setting up roped off areas, tents, toilets, timing equipment and signage.


By the time scrutineering and the drivers briefing was finished, the low clouds had blown away and the Autumn sun was out, it was time for a practice run to be followed by three timed runs throughout the day. The eighty or so competitors were divided into two groups of forty, with no separate return road, this seemed to be a more efficient way to deal with getting competitors back to the start area, rather than having more smaller groups returning through out the day and interrupting the proceedings.


The various events were:

All together a great meeting, great weather, great atmosphere and great organization by David Lowe and his committee. From personal point of view it was a day of minor frustration with a misbehaving engine that wouldn't rev past 3500 rpm, caused by neglect. But compensated by catching up with lots of old friends, some I hadn't seen for over forty years. Can't wait for the next Myrniong in twelve months.