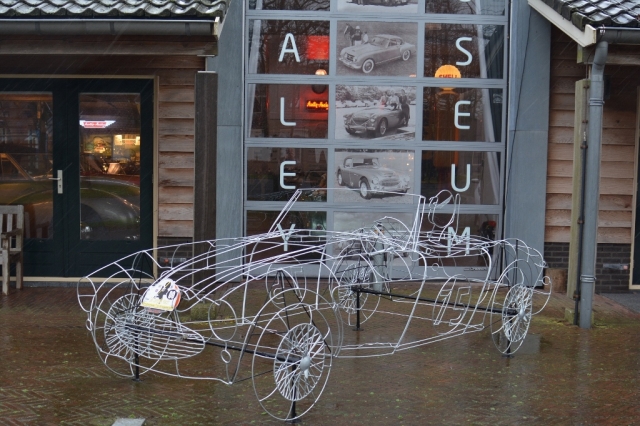 Reading the title of this article a majority of the readers will probably think that this museum is situated in the UK or in the USA. Most of the Healeys were sold there so what would a more logical place for a Healey museum ? Well you’re wrong, the Healey museum is located in the Netherlands just 20 kilometres south of Amsterdam, in a small village called Vreeland. The initiative to create a Healey museum came from Hans van de Kerkhof. As a teenager Hans was already impressed by Austin Healeys which he spotted in his neighbourhood and a few years later he fulfilled his dream and bought his first Austin Healey. From that moment his interest in the marque grew and during the years he started collecting Healeys and everything item related to the marque Healey. The results of his passion and his close relationship to the Healey family are exhibited in this museum which opened its doors on the 24th november 2012.
The Donald Healey Motor Company
The Dutch Healey museum is in fact the only museum in the world dedicated especially to the marque Healey. But why is the museum called Healey and not Austin Healey as most of the cars were produced and sold as Austin Healeys ? Well, it all started just after WWII in Warwick (UK), in an old aircraft components factory.
Chassis members were bent on metal folding machines and also bodyshells were built in the same factory. Riley supplied the engines and transmissions and the first prototype Healey car was finished in 1946. Building several models and building up a reputation as a builder of motorcars kept Donald Healey busy during the years 1946-1953. As already mentioned in the introduction the museum was founded by Hans van de Kerkhof and his wife Ria, to collect and preserve the heritage of Donald Healey and the products of the Donald Healey Motor Company and to show them to car enthusiasts. The museum displays the original files from the Healey factory, early photos, trophys and memorabilia from the glory years of Austin Healey's in racing and rallying, a huge collection of scale models and last but not least seventeen cars (Healey and Austin Healeys) of which most of them are very rare or carry an interesting history. Underneath is a description of the cars on display during my visit in December 2017.

Healey Sportsmobile 4 seat cabriolet and Duncan Healey
Alongside the saloons and coupes, Healey developed an open four-seater called the Sportsmobile, designed for the American market. The Sportsmobile remained in production until 1950 alongside the famous Silverstone model with its shorter chassis and minimalist bodywork. Just 25 cars were produced and the car in the museum is one of the 5 known to exist.Duncan was a coachbuilder in Norfolk. Healey delivered the A and B type rolling chassis including the drivetrain (2.4 litre Riley engine) and from 1946 to 1948 thirty-nine saloon models and two dropheads were built. The only drophead still in existence is in the Healey museum.

Healey Silverstone
Before Healey started the cooperation with Nash, a real sports car was already developed. It was the model Silverstone, a car designed for the road but also suitable for club races during the weekends. The headlights were situated behind the grille so well protected during racing, the front screen could be lowered and it was an easy job to remove the mudguards. To comply with the rules of the Mille Miglia roadrace a rear bumper was an essential requirement. Donald Healey came with a brilliant solution, the spare wheel and tyre were positioned in the middle of the rear end and had the function of a bumper. In total 105 Silverstones were made between 1949-1950 and this model is still very popular for competing in classic race events.

The Nash-Healey
On one of his trips to North America on board of the Queen Elizabeth, Donald Healey met George Mason (president of the Nash Kelvinator Corporation). Mason was able to convince Donald that a joint venture would be a good idea and as a result the Nash-Healey was born in 1950, and this led to greatly increased USA sales of Healeys.The Nash Healey was based on a widened and reinforced chassis of the Silverstone. Healey designed the aluminum body, but the production was outsourced to Panelcraft Sheet Metal of Birmingham. Healey was responsible for the car's final assembly.Nash Motors supplied the powertrain: the Ambassador’s inline six-cylinder OHV 3.85 litre engine and three-speed manual transmission with Borg-Warner overdrive, plus torque tube and differential. The production started in February 1951. For 1952, Nash commissioned Italian designer Pininfarina to restyle Healey's original body design to make the sports car more similar to the rest of Nash's models. The front received a new grille incorporating inboard headlights. The sides now featured a distinct fender character lines ending with small tailfins in the rear. Building these cars was quite complicated as the Nash engines and drivelines went to England for installation in the Healey-fabricated frames. The rolling chassis were transported to Italy, where Pininfarina's craftsmen fixed the bodywork and assembled the finished product. Finally the cars were shipped again to the USA. No wonder the Nash healeys were to expensive with a price tag of $5,908 while a new Chevrolet Corvette cost $3,513. Production ceased in August 1954, In total 506 Nash-Healeys were made.

The Austin-Healey
The next step for the Healey Motor Company was to develop a sportscar which would be a great success for the huge American market. A sportscar cheaper and smarter than the Nash-Healey. Rivals for the American market were MG and Jaguar so a car fitting between these two rivals was the best option. Together with his eldest son Geoffrey, Donald designed a two-seater roadster with low-cost Austin mechanical components. Healey planned to build production versions in-house at his factory in Warwick. At the 1952 Earls Court Motor Show the Ice Blue prototype not only impressed the public, but also excited Austin's Managing Director, Leonard Lord, so he struck a deal to build the car in volume at Longbridge. The newcomer was renamed the Austin-Healey 100. The production bodyshells were made by Jensen and then transported to Longbridge where the cars were assembled alongside the Austin A90. The early cars (code named BN1s) were equipped with the same 90bhp 2,660cc engines and manual four-speed transmissions as the A90 though, in an unusual move, Austin modified the gearbox so it operated as a three-speed unit with overdrive on the top two ratios. The rest, as they say, is history. Some very special Austin Healeys are exhibited in this museum, there’s the prototype of a Healey 100, called BN3.
This prototype was built to examine some possible refinements to the basic design, the car seemed to be lost until someone in Canada found a rusty, discarded Healey with a different and strange chassis number. Van de Kerkhof was able to buy this prototype and the body has been been fully restored and is painted in matt silver gray. The body is exposed as a real piece of art and a large mirror is placed underneath to show the difference of the chassis compared to a production Healey. On the wall is a photo of the car as it was found in Canada at the time. Another unique Healey in this museum is the private car of Donald Healey, a prototype and one of just two 100s built in Coupe form by the Jensen Motor Company in 1953. At the end of 2015 this Coupé was auctioned by Bonhams and purchased by a Dutchman national and was revealed to a select audience at the museum on 19th December 2015.

Healey 4000
In 1966 the Healey 3000 became a little aged and in the United States the proposed pollution and safety standards would threaten the sales of the Healey. The Healey Motor company and their partner BMC, were faced with a dilemma: should the Austin Healey 3000 be replaced, updated or withdrawn? Donald Healey came with the idea for a renewed version of the big Healey. As a power source he chose a four liter 6-cylinder Rolls-Royce engine, used in the Vanden Plas Princess 4 Liter R including the Borg Warner Model 8 automatic transmission. For the prototype a new Healey 3000 was cut in half in the longitudinal direction and the car was welded together again adding 15 centimeters. Also the Princess R rear axle was fitted to the prototype. The prototype was finished in February 1967 and shown to the BMC management. BMC was pleased with the prototype and there were plans to put the car into production in 1968. BMC ordered six pre-production cars with different transmissions – a pair for each of three transmissions; the Borg-Warner Automatic, the Jaguar 4-speed manual and the same unit fitted with overdrive. However, the British motor industry was already heading towards great merger of British car brands and the new concern had the Jaguar E-Type, MGC and Triumph TR5 so there was no need for an upgraded Healey anymore. The three almost finished prototypes were made roadworthy at Donald Healey’s Cornish home. All the three prototypes were sold to selected Healey customers. TNX 65G went to Bristol in the UK where it was discovered by Peter and Joe Cox in 1974. During 1976 to 1978 the car was completely restored.
The car remained in the same ownership until 2013 when it was acquired by the Healey museum. The other two cars with Jaguar manual gearboxes still exist - one in Australia and one in Switzerland.

The Mark II model was announced at the end of May 1961 and used the same 948 cc engine but the bodywork was completely revamped, with the headlights positioned in a more conventional way (in the wings). The museum managed to obtain an early Mark II model, originally delivered to the United States. It has a bumper bracket and whitewall tires but it’s a car with a sad history. This Sprite was bought by a man for his son. Sadly the son got involved in a heavy accident with the Sprite and got badly injured and died. His father kept the car and several years later decided to have it repaired and completely restored. There are just 1753 miles on the clock.Another Healey Sprite with a more pleasant past is the 1965 Austin Healey Sprite Le Mans/Sebring sports racing car. For 1965 the Healey Motor Company developed a new wind-tunnel developed aluminium coupé. Its first outing was in the 1965 Sebring 12 Hour Race. The drivers were Clive Baker and Rauno Aaltonen, who finished 15th overall. In July 2010 Marc Verstraete from Belgium bought the car and it’s on display in the museum.

The Healey Museum is a unique experience for every Healey or Austin Healey owner or classic car enthusiast. The museum is usually open every week from Friday to Sunday from 11.00 AM to 17.00 PM. For travelers from abroad the Healey Museum is an easy travel destination. The Museum has an excellent website for the latest information: http://www.healeymuseum.nl