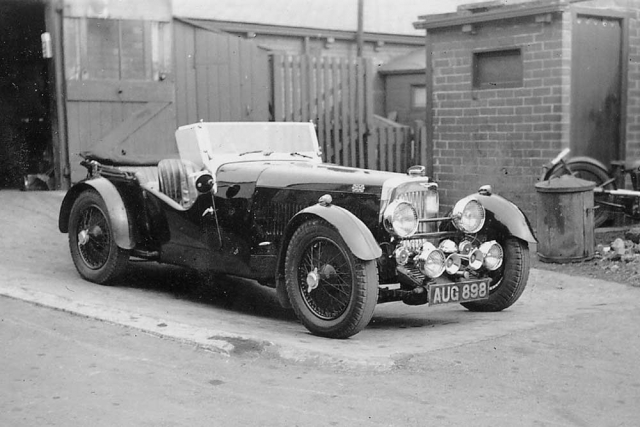 I retraced my steps and contacted the Central Garage where the car was being kept. Immediately I set eyes upon it I knew this was what I wanted and after a examination with an engineer as to its condition, I purchased the beauty. The Aston seemed perfect in all respects, but required more ‘running in’. I wasted no time in a visit to Brooklands where I obtained a room, or rather Bertram did this at the Queens Head. On the way down I visited the Aston Martin factory which was on my route from London to Byfleet to have the car checked over. In the course of this visit I met Gordon Sutherland the joint director of the company as well as the other direc­tor, Cesare Bertelli, the actual designer of the 1 1/2-litre Aston. All this was very reassuring and gave me confidence that I could not have chosen a better vehicle for my particular purpose.
The Aston Martin, particularly the ’Ulster’ model Mk II,  (above) was considered to be by far the most beautiful racing car of the inter-war years, and anybody who has driven one will understand the feeling of purposefulness as one sits in the cockpit examining the dashboard with its Ki-gass primer and line of multiple switches and functional gauges. The high ratio steering, the sound of the exhaust, the slightly over-firm suspension and superb gear-change mechanism all adds to the feeling of a thoroughbred and confi­dence in the designer’s integrity. Its style is one of ‘no frills’. It looks exactly what it is, and is exactly what it looks.

So in 1935 I had my ‘Ulster’ and took it to Brooklands where I already had a 4 1/2-litre Bentley in the care of my friends Granville Grenfell and Wally Hasson, both amongst the greatest developers of automotive racing at that time. In Grenfell’s case it was super­chargers which were his specialty while Wally Hasson applied his genius to designing ‘specials’ for outer-circuit ultimate speed.

There was plenty of company on the few days just prior to a race. The exhilarating machine gun crackle of the individual exhaust notes, deafening despite the mandatory fitting of Brooklands exhaust silencers, all helped to deaden one’s nerves and restore some confidence that one would know where to place one’s car on the steep Home banking, thus to gain maximum speed before entering the straight which followed. But of course one had to aquire the necessary approval for entering a race in the way of a competition licence, and one’s car had to be passed by the scrutineers. Moreover fit in some practice time to regain the ‘feel’ of the track as well as checking the car’s performance and tune. There was also the question of how much fuel one should carry, for a 200 mile race there was no point in loading the car with more fuel than was necessary, and I based my consumption at between 10 and 15 miles per gallon at which 15 gallons should see me through with a little to spare. Any further economies in weight were adopted, such as removing mudguards, spare wheel, windscreen, tools, passenger seat and so forth. Such things depending upon the rules and class for which one was entered. The weight of the Aston all up was 18cwt (915kg), but in racing trim we could get this down to around 14cwt (711kg), which helped the performance considerably, if not the road holding. The car felt much more alive when stripped of unnecessary weight, although this no doubt owed something to a psychological influence by its appearance, more like an open wheeler racing machine of the day than a competition sports car.